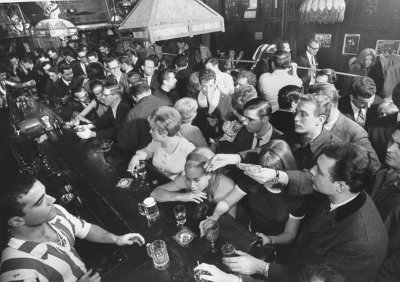 My co-worker: “If that guy calls me ‘Chief’ one more time, I’m cutting him off.”

As I write this, I’m sitting at my bar, just off of work on a Friday night. I feel sorry for my co-worker; I’m the one who got Drunk Fella that way.

What Drunk Fella doesn’t know is that he is being ignored on purpose.

When Mr. McKay asked me to write this article, I had to think about it for a couple weeks. I really had to talk to a lot of bartenders I know to find out what their process is for getting their customers drinks. Do they just start at one end of the bar and work their way down? Does a regular get served before someone they don’t know? Do friends take precedence? Or do they just serve the loudest guy first, in an effort to get him to shut his trap? After talking to a few co-workers and fellow bartenders, I think I’ve got it down to a few key concepts.

An elephant never forgets. Neither does a bartender (or waiter, for that matter). If you don’t tip well, or at all, you are automatically on the bottom of the list. And don’t play games with your tipping, either. If you pay cash each round, tip with your change. Don’t pull it all back and then tip at the end of the night. Tipping is expected, no matter how much you think of it as “extra.” If you start a tab, tip when you pay at the end of the night, or when you get your rounds with whatever cash you happen to have. Either will do! Both!

Here’s a tip: tip big on the very first round. I have a customer that hands me a $20 bill after he’s paid for his first drink. I take care of him until he leaves. He often gets refills before he’s even done with his last one. I take care of him because he’s taken care of me already, and no matter how busy it is, I always have time for him.

And guys, your phone number is not a tip. Give my female bartenders out there a break.

2. Know what you’re going to order before you start yelling for service.

Hopefully, I’ve gotten there just as your group has approached the bar and I’ve asked you what you’d like to have. If you’re the one who ends up ordering for the group, I understand if you don’t know what everyone wants. That’s why I have no problem waiting for your order if I’ve approached you. But if it’s super busy and you’ve finally gotten me over to take your order, KNOW WHAT YOU WANT. There is nothing worse than hearing you call for service for a few minutes and when I get there, you don’t know what you are ordering. I can’t stress this enough. In the time it takes you to figure out what everyone is drinking, I could have filled two other orders. All that time spent yelling for service should be used for figuring out what your group wants.

Case in point: for some reason, I always end up being the “order guy” for my group. Last time, we had a new person with us and I didn’t know his drink, so I asked him BEFORE we got to the bar. When the bartender came over, I rattled it off to her, she quickly called my price, and I paid her. She took my money, ran to get the drinks, and brought them back with the correct change. The whole thing took 5 minutes. Because I tipped well, the next time, it took 2.

We understand that if we approach you, we’ve caught you off guard and you may not know who needs what. But if you’re yelling, waving your arms, slapping the bar, trying to get our attention, then we get there and you don’t know what you want, understand that we’re a bit unhappy.

The list goes on. Don’t use them. For bartenders they’re the equivalent of nails on a chalkboard. Now, I know that not all bartenders will call you “sir.” But they should call you something respectable if they don’t know your name. My line is “Sir, can I get you a drink?” and when I deliver, “There you are, sir. My name is Mike if you need anything else.” I expect to be called by my name or sir, or if you’re impolite, I’ll answer to “bartender.” “Chief” especially chills my spine.

The key is not the names, but what they represent: respect. Like it or not, the bartender is in charge of the bar. You are in his territory. Waiters come to YOUR table, but you have entered the bartender’s area. Treat it, and him, with respect, and you’ll both have a good time.

4. Don’t stand at the server station.

If the bar has a station where servers come to pick up drinks, it’s a bad idea to try to stand there to get one. You’ll get mad because the bartender is there 50% of the time, yet he’s ignoring you, and he’ll ignore you because you’re not supposed to be there in the first place, so he’s hoping you’ll get the idea and move.

Find a bar you like. Go there as often as you can. If they serve food and it’s good, eat there on a slow night. Talk to the bartender when he’s not busy. Get to know about him and let him know about you. Create a rapport. When he sees you on a busy night, he’ll make steps to make sure you’re having a good time and getting taken care of. Unless you’re the creepy jerk regular that only tips with phone numbers given to the waitresses!

I’m lucky because I’m tall. Not NBA tall, but tall enough. I find a hole in the bar chairs that allows me not to reach over someone’s back. I hold my money in my hand, elbow on the bar, hand in the air, facing the bartender. I look at them until they’ve made eye contact. Now they know I’m there. Now I can scan the bar for beautiful women, friends I didn’t know would be there, or check the score of the game. But I keep watching the bartender. When they come over, I rattle off my drink order, and repeat if necessary. Explain drinks if necessary. The money is still in my hand. I say thank you when they bring the drinks back to me. They take the money. I say thank you again when I get my change, and because I know what I’ve already planned on tipping, I give it straight to them, saying thanks for a third time. If I need a helper for my drink load, they’re already there with me, and I start handing drinks back. Then I make my way to the spot where my group is. They next guy who is paying for a round usually ends up just giving me the money and having me do it…or we all just sit there parched while he calls the bartender “Chief” a thousand times…