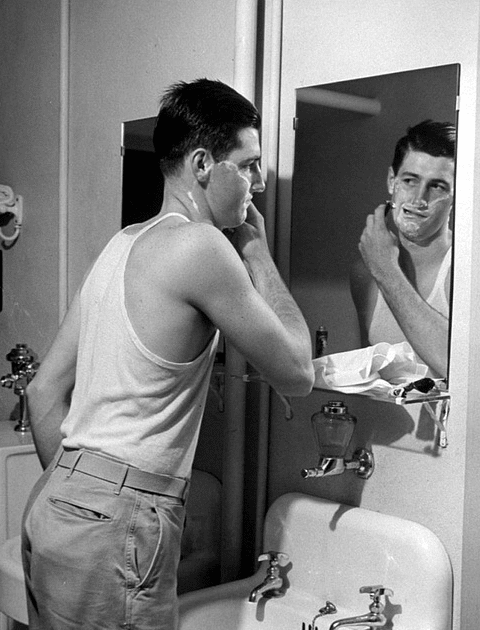 Editor’s note: This is a guest post from Mark “Mantic59″ Herro.

So you’re new to wet shaving. Maybe you’re at that time in your life where you’re just beginning to shave. Or perhaps you’re making a transition from electric razors to manual. Or you’ve decided to shave like your grandpa. In any case, there are some common mistakes new wet shavers make that I see all the time. I cover 7 of those mistakes below, as well as their solutions. Let’s jump in!

One mistake many men make (particularly those switching from electric to manual) is preparation. They think that splashing some water on their face for a few seconds is enough to get lathered. The truth is that it can take up to three minutes to properly clean and hydrate the skin for shaving.

Gently wash with warm (not hot) water and a soap specifically made for the face — body or deodorant bars will strip away too much of the skin’s natural oils, drying the skin and making shaving more difficult. If you’re young and struggling with acne, you may want to avoid using a washcloth (vigorous scrubbing can irritate the skin and make acne worse). Don’t neglect preparing the neck too!

That pressurized can of shaving foam from the discount store might seem the way to go for someone learning how to wet shave, but it may be the worst decision you could make. Sure, it’s cheap and convenient, and some people can use them without any problems, but there are some trade-offs. The can’s propellant will tend to dry out the skin, so the manufacturers have to add artificial lubricants to try to make up for it. Then even more ingredients that have nothing to do with shaving are added, like stabilizers and preservatives. Remember, your skin is the largest organ of the body, so every additional unneeded ingredient is one more chance for some kind of allergic reaction.

So at least look for a decent shave product out of a squeeze tube. Better yet, try a lathering shave soap or cream that is applied with a shaving brush. You may pay a few pennies more for it, but your skin with thank you.

Hair doesn’t just grow “out” from the body, it grows in a particular direction — which is called the grain. To determine the grain, let the hair grow for a day or so then gently rub the area from different directions. Some directions will feel rougher and some smoother. The smoothest direction is the hair’s grain for that area of your face. You may find the grain changing direction on different areas of the skin, so it is useful to make a map of the area (at least mentally) and note the patterns.

Why is this important? Think of shaving not so much as eliminating hair but rather reducing hair (hey, it’s going to grow back!). You want to make the “bulk” reduction known as shaving as comfortable as possible, avoiding irritation and nicks. The best way to do that is by initially shaving with the grain. If you want a closer shave, re-lather and shave across the grain (at a direction 90 degrees away from the grain). Closer still? Re-lather and shave across the grain from the opposite direction. Some people can shave against the grain, but it should only be attempted after at least a pass with the grain, and I recommend a cross-grain pass before as well.

By the way, if you are using a single-blade razor (an “old school” double-edge, single-edge, or straight razor), you may be able to cheat a little and not follow every twist and turn but instead shave in the predominant direction your hair grows. But if you are using a multi-blade cartridge razor, you need to be following the grain more closely.

Mistake #4: Too Much Pressure

Probably the most common — and most serious — problem for a new wet shaver is using too much pressure on the razor. It must be something innate in the male species to press down when shaving the skin, perhaps thinking you must be getting more of the stubble. The opposite, however, is more accurate. Razor blades are at their most efficient when cutting across a flat surface. Pressing down creates a “ditch” that can cause irritation and an inconsistent shave.

Modern razors can at least partially compensate for too much pressure with things like pretensioners (those “fins” at the bottom of the razor cartridge), pivot schemes, and cartridge designs (multiple blades and “skin guards” that create a flatter surface). But you can avoid all that by simply using a light touch on the razor.

Tilt your head to one side and rest the razor on your cheek. Feel that? That’s the most pressure you should use on the razor.

Listen to my podcast with Mark about all things shaving:

Shaving with the blade at too steep of an angle is another frequent cause of irritation and nicks. This is actually two different issues.

If you’re making the transition from a cartridge razor to a double-edge there’s a tendency to hold the razor the same way. However, that is usually too steep of an angle. Hold the razor so that its top cap is resting on your face, then rock the handle down until the blade edge is just touching the skin. Some advocate learning the correct angle by shaving in a silent bathroom (no radio, running water, or other distractions) and listening to the sound of the stubble being cut to “tune in” the correct blade angle.

On the other hand, if you are using a cartridge razor, you are locked into a specific angle set by the manufacturer. Unfortunately it is some engineer’s guess (or maybe some marketer’s guess) of what the average angle should be for most people. The problem is, you are not most people. You are you. What works for one person may not work for another. A few years ago a certain four-blade razor was set to a notoriously steep angle; it may have been great for television commercials but countless faces suffered for it. If you are going to stick with a cartridge razor, spend some time to find the one that works best for you.

Another common mistake even experienced shavers make is trying to shave an unlubricated patch of skin. It seems we all miss those little bits in hard-to-get areas like the corners of the mouth or right under the jawline, and the natural reaction is to go back and give it another swipe when we see it. Unfortunately, that’s a prescription for a nick or cut. If there’s no lather there (gel, soap, cream, whatever), no blade belongs there! Practically speaking, some people can get away with a short, light swipe at the very end of the shave with just water. But remember, even water can be a lubricant.

Related to shaving over unlubricated skin is the tendency to repeat strokes — that is, going over the same spot again and again at the same time. It is a habit many people pick up, but it’s a sure-fire way to get razor burn. New shavers should make a conscious effort to make their shaving “efficient” — mindful strokes that only slightly overlap. Remember, you are trying to reduce the hair, not get rid of it all at once. If you miss a spot, you can re-lather and catch it on the next pass.

Paying attention to correcting these common mistakes will reduce the chances of irritation and increase your enjoyment of shaving.

Mark Herro (AKA “Mantic59″) has been showing the world “what your father didn’t teach you about shaving” for the past eight years with videos that have become the seminal “how to shave” tutorials. He also shares expertise about shaving and grooming at www.sharpologist.com.