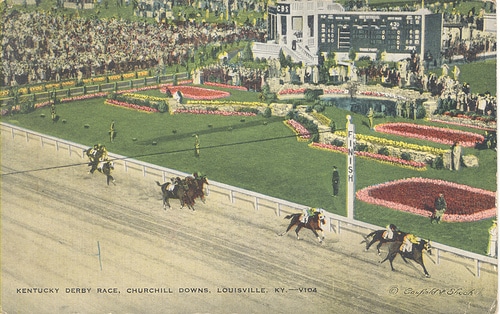 This article is co-written by guest writer, The Houndstooth Kid, and our Style regular Antonio Centeno.  If you enjoy it, please visit the Houndtooth Kid’s blog for information and musings on vintage menswear.

On May 2nd 2009, the Kentucky Derby will be 135 years young; since 1875 it has been held at Churchill Downs in Louisville, Kentucky and has grown from a local event to one that is watched worldwide by millions. Inspired by the British Epsom Derby, the American version grew from the imagination of Meriwether Lewis Clark, Jr. and his efforts to cement Kentucky as one of the horse racing capitals of the world.  In this he succeeded.

The Kentucky Derby is a southern spectacle rich in tradition; Burgoo, Mint Julep, and the infamous Infield are all terms a first time attendee will become intimately familiar with. Two events in one, the Derby is both a race and a two week party where fashion takes center stage.  The 140,000 attendees in the stands and box seats are requested to dress “smart casual” on race day; in response, thousands dress to the nines in their best summer garb, modeling everything from the traditional to the, well, unique. A sporting event and fashion parade in one, the Kentucky Derby lets viewers take part in forging the summer’s fashions.

So what should you wear to the Kentucky Derby?  How do you dress for the parties and celebrations that surround this unique American event? A relevant question, because even for a man who is not attending the Derby or a Derby party, the classic styles that work at Churchill Downs can be utilized in any American city during the summer. 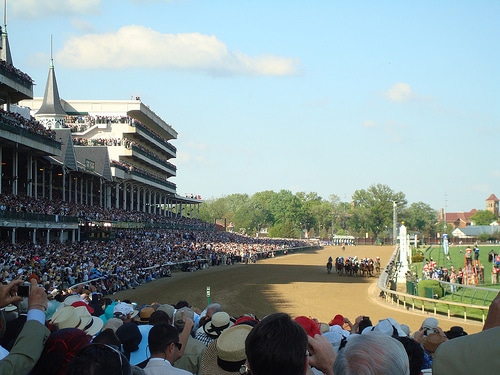 The Derby and the Setting of Style Trends

The future of style is definitely worthy to pursue, but what of the past? My specialty is clothing of the 1930s and 1940s, the Golden Era of American Style when the United States and its ambassadors of style set the tone that the world followed.  In this spirit of tradition, we’ll be building a classic summer outfit for the Kentucky Derby while looking through the lens of the Golden Era for inspiration. While we could take a look at summer suit styles (such as the classic seersucker suit) or the stroller (the daytime equivalent of the dinner jacket), we’ll instead look at an outfit most men already have the basic ingredients to build: the sports coat and odd trousers combination.

Starting at the Top – The Derby Hat 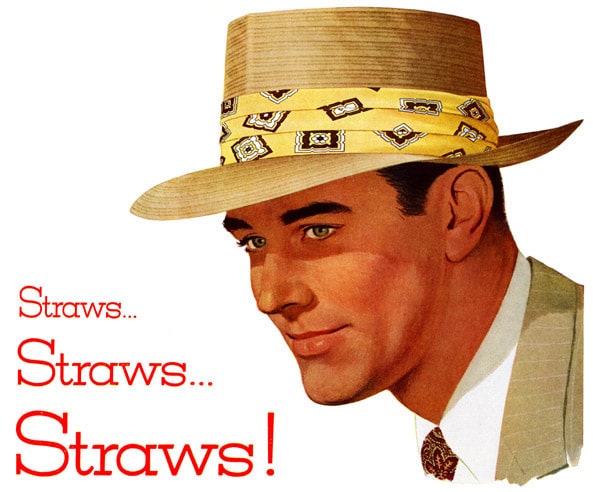 Perhaps the best reason to attend the Derby is to wear and look at the wide range and abundance of headwear.  With umbrellas banned and at the mercy of the weather, most attendees quickly realize the usefulness of a good hat. While women tend to have the most fun when it comes to headwear fashion, the men aren’t exactly slackers and will be sporting many classic styles. Straw hats have been favorites of the past since its lightweight build and weaves keeps the sun off the wearer’s head while allowing air to flow freely. Boaters, Panamas, Milans and other semi-formal straws are all solid choices for the discriminating man.  If straw is not to your taste or rain is threatening, turn then to the trusty felt hat such as a fedora or homburg.  If made from a lightweight felt, it will see you through the heat and glare in style.

Click here to get a primer on different hats, and here to find the best hat for your face shape. 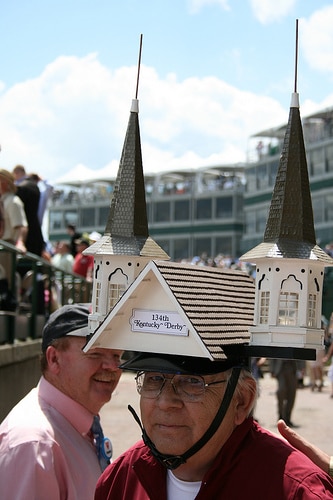 Of course if none of the normal hat choices fit you, you can mock up something all your own.

Under It All – the Derby Shirt

A great Derby shirt acts as a foundation for the outfit; it should be made of a breathable fabric such as cotton and woven with a tight enough weave to prevent heavy wrinkling.  Like a blank canvas, it allows the wearer to paint upon it with smooth strokes as he matches a jacket, trousers, pocket square, and tie to create his look.  Shirt style and fit should depend upon personal preference and build, but the color should in my opinion be somewhat muted – the Kentucky Derby is a day in which a man’s accessories make the outfit, so an attention grabbing shirt should be avoided so as not to overwhelm them. The plain white shirt, especially for a warm weather event like the Derby, provides a clean and unassuming background.  It allows other components of a man’s outfit such as a tie or pocket square to shine more brightly.

Hike ’em Up! – The Derby Trousers

Although you could wear a suit to the Kentucky Derby, I’m a bigger fan of a more casual but just as stylish look that requires more thought to pull off: the matching of a sports jacket with a pair of odd trousers.  Khaki and light grey are the most common color for summer odd trousers, however they are not the only options.  The nature of the Derby encourages some experimentation, and the man willing to wear cream or white trousers to contrast with his jacket will really stand out.  Smart combinations like a blue jacket with cream trousers create a striking image and can make the wearer appear deliberate and confident with his choices.  While toothpick-legged, low slung pants are in fashion at the moment, the high-waisted and wide, straight-legged trousers of old are never out of style. Pleats and cuffs or lack thereof is up to personal preference, but keep in mind that cuffs add weight to the leg and help it drape better. A full drape makes for elegant trousers.

The Main Event – The Derby Coat 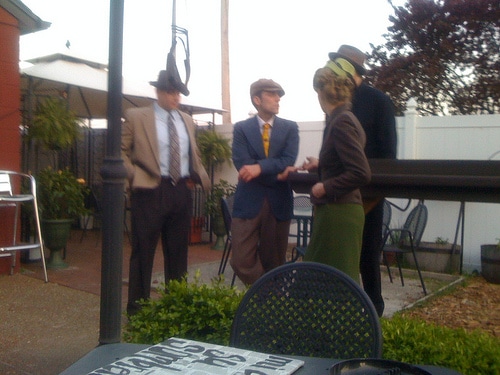 
The most observed layer of clothing a man wears to the Derby is his sports coat.  Literally a jacket for sporting, the modern sports coat can be traced back to the early 20th century when such manly hobbies as angling, hunting, target shooting and equestrian sports required rugged clothing that still had to retain a gentlemanly feel.  Demanding a large range of motion in the upper body, the sports coats of old afforded such movement by being built with belted, bi-swing, pleated, and center gusseted backs.  Today when choosing a Derby sports coat, look for an unbridled yet sophisticated style. I often see this combination in vintage sports coats, as that they are not too far removed from their wilderness roots.  Promising signs are patch or hacking pockets, interesting fabric patterns that seem too busy for a suit, and any of the back treatments mentioned above.  As to color, sports coats come in a wide range of them; navy blue, brown, tan, green, cream and even white are great for both late spring and summer.  All will be on display at the Derby, with perhaps the white and cream being the rarest.  Not because they are inappropriate, rather only because of their difficultly in keeping clean.  However the man that can wear white is guaranteed to create a striking figure. 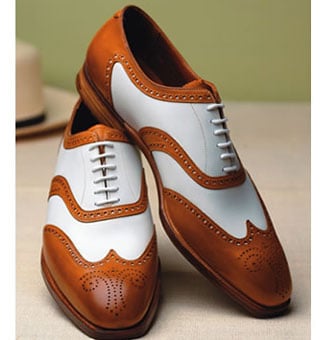 Since you’ll be on your feet quite a bit at the Derby, it is imperative to find comfortable footwear that will fit right in at the event. Any semi-formal shoe will work as long as it accentuates the rest of the outfit. However, this being a summer event, you might try something a little more daring such as the saddle shoe or even the classic spectator. A brown and white spectator shoe will go with most any outfit and adds some color and visual interest that would otherwise be missing. Even a brown or white suede oxford can stand out well among the crowd while keeping with the tradition of the event.  If you’re a man after the full Derby experience, a pair of equestrian boots like those of old might trip your trigger.

Dressing for the Infield?

If you are headed to the drunken party known as the Infield, well, you can ignore everything in this article except this bit of advice:  Eat a solid (not liquid) breakfast, wear sunblock, drink some water, and for goodness sake, avoid the cameras.

Dress well when you attend the Kentucky Derby, for a true gentleman understands the history of the event and realizes it’s one of the few remaining bastions of genteelness in America.  Add to the enjoyment of those around you by dressing in the mood of the festivities; like a uniform, it’ll help you better feel the ambiance and create lasting memories. If can’t attend the Derby in person but are looking for an excuse to get dressed up in Southern style, why not throw a Derby party at your house this weekend?

A hat tip to Andrew Holtzclaw for requesting this article