The flowers are growing, the birds are singing, and the storm clouds are gathering. Yes, it’s tornado season once again.

We had several thunderstorms here in Tulsa last month, and the tornado siren has already gone off three times (all of them in a single night), so preparing for a twister to come barreling through my neighborhood has been on my mind lately. Statistically, more tornados happen in May than any other month of the year.

With swirling winds that can reach up to 300mph, tornados are both fascinating and frightening. On average, 60 people die each year from tornado outbreaks, but in a particularly deadly year, like 2011, they can kill over 500. I’ve been through two big tornadoes during my time in Oklahoma that flattened entire parts of cities. It’s one of the most surreal and sobering things to see.

Tornado safety is pretty elementary – quite literally; if you grow up here in “tornado alley,” sometime during your grade school years a kindly local weatherman will probably show up at your school and teach you how to survive a twister. For me, Gary England was that kindly local weatherman. The man is a cult hero roun’ these parts. He’s calmly talked Oklahomans through tornadoes and severe ice storms for 40 years. Gary England is so beloved, there’s even a drinking game named after him.

Yet despite growing up in the panhandle state, I learned a surprising number of new things (as well as how advice has changed over the years) while researching this article. And if you’re a new arrival to the Midwest or Southeast, tornado survival 101 is something you should definitely take the time to learn. Also, just because you don’t live in a tornado-prone part of the country doesn’t mean this bit of lifesaving know-how doesn’t apply to you; tornados have occurred in all 50 states.

How to Survive a Tornado

Before the storm clouds even gather, know exactly where you’ll take cover in your home if a tornado approaches, and store some padding materials in this designated “shelter” (we’ll talk about this more below). When you’re out and about at the stores and restaurants that you frequent, take note of where the bathrooms are and if shelters are available. If you live in an apartment or mobile home park, know what the tornado evacuation drill is and where you’re supposed to go for shelter if a tornado is imminent.

Since tornados can knock out power and utilities for several days, I also recommend having a 72-hour emergency kit at the least, and ideally, supplies for a longer period of grid-down as well.

Tornados can occur without warning any time of day, even if there isn’t a thunderstorm in the area. And if it’s nighttime, or there is heavy rain and clouds in the vicinity, you may not be able to see signs of a potential tornado. That being said, most tornados occur in the afternoon, and they are sometimes preceded by a few telltale conditions. Signs of a possible tornado include a pea-soup green sky and/or a low, dark cloud; spotting a wall cloud around here is always a cause for concern. 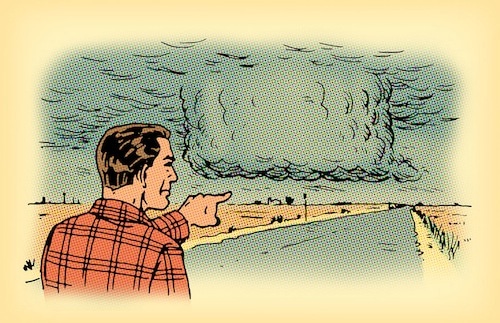 If a tornado is imminent, it may be accompanied by the following signs, provided by the NOAA Storm Prediction Center:

A tornado watch means that conditions are present that make tornados possible over the next several hours. This doesn’t mean tornados are imminent, but it’s something to be aware of as you go about and plan your day.

A tornado warning means an actual tornado has been spotted descending from the clouds or on the ground, or that meteorologists have seen circulation in the storm on their Doppler radar. Many cities and towns located in tornado-prone areas have sirens that will go off when this happens. If you don’t live in a place that has tornado sirens, it’s especially important to check in with the local forecast periodically during a tornado watch. Also consider putting something like the tornado warning app from the Red Cross on your phone that will sound an audible alarm if a tornado warning is issued. (This is a good idea even if there are sirens in your area, if like me, you sometimes sleep through them.)

Now, the professional advice is that once there’s a tornado warning, you should seek shelter immediately. And that’s good counsel. Personally, because the sirens go off even when there’s only suspicious circulation, or when a tornado is on the ground 30 miles from where we live (the average warning time before a tornado hits is almost 15 minutes), as soon as I hear the siren, I flip on the TV to a local news station, as they give you blow-by-blow reporting of exactly what’s going on. In many cases, they even give specific neighborhoods or crossroads in which people should immediately take shelter. (It’s a good idea to have an emergency radio for updates in case the power goes out.) I watch to see if we’re in the twister’s path, and am ready to bolt for our below-ground garage if necessary.

Now this isn’t to say that you should be blasé about tornado warnings. It is easy to get that way when you live in a place where the sirens often go off without anything happening. But experts think that’s exactly why the death toll from the 2011 Joplin, Missouri tornado was so high; people figured it was another false alarm and kept driving along and going about their activities instead of getting to shelter. You have to treat every tornado warning like it’s the real deal.

In a house. If you don’t have a dedicated storm shelter, the best place to take cover in a house (or anywhere else) is in the basement. If you don’t have a basement (and they’re not too common out here actually), head to an interior bathroom, hallway, or closet without windows on the lowest floor of your house; the more walls you can put between you and the wind, the better. If you live in a multi-story house, don’t position yourself under a large, heavy object that’s on the floor(s) above you – like a piano or refrigerator, if possible. It could come crashing down if the structural integrity of the house is compromised. 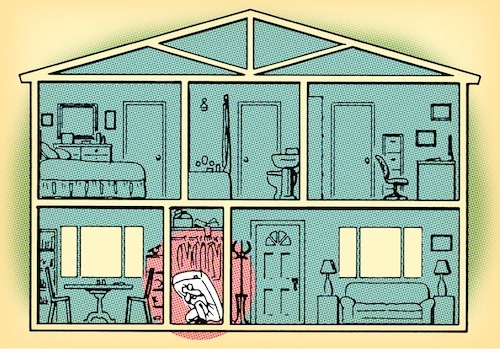 Wherever you hunker down, try to cover yourself with a mattress or blankets, or crawl under a sturdy table or workbench to protect yourself from debris, including that which might fall on top of you. Experts even recommend donning a motorcycle, football, or bicycle helmet to shield your noggin. If you don’t have any extra padding, at least curl into a ball and cover your head with your arms and hands.

In additions to these precautions, you should also be aware of a few myths you might have heard that aren’t true:

In a mobile home. Get out! People are 15 times more likely to die in a mobile home than any other location. Even mobile homes with a tie-down system cannot withstand the strong winds of a twister. Take shelter in a permanent building if you can. If no other shelter is available, lie facedown in a ditch and cover your head with your arms and hands.

At a business/office. If you’re at your office, take shelter in an interior room or bathroom on the first floor — one that’s free, or at the least far, from windows. Crouch facedown and cover your head with your hands and arms. Another good spot is interior stairwells. Avoid taking elevators as they can get stuck if the electricity goes out.

“Long-span” buildings (think shopping malls, big box stores, theaters, and gymnasiums) can be particularly dangerous places to be during a tornado, as the roof is often only supported by the exterior walls; when the buildings reach a “failure point” they can completely collapse. Some of these buildings have dedicated storm shelters; if not, go to the lowest level and look for a windowless bathroom or storage room at the interior of the store. If such a place cannot be located, try to hunker down under something that might provide stronger support, like a doorframe, or under something sturdy, like theater seats, that will shield you from falling debris.

Outside. If there are no shelters around, lie flat in a low area of ground like a ditch or gully and cover your head with your hands and arms. Try to pick a spot away from trees and other potential projectiles.

On the road. Your car is one of the most dangerous places you can be when a tornado strikes; the strongest of twisters can flip or pick up your vehicle and launch it hundreds of yards or wrap it around a tree. So if there’s a permanent building nearby, your best bet is to get out, get inside, and head for a place that matches the description given above; for example, at a fast food restaurant, take cover in the bathroom, or a walk-in freezer, if that’s available.

If there are no permanent shelters nearby, you may need to drive away from the storm. You might have heard that this kind of escape should never be attempted, but the NOAA’s Storm Prediction Center argues that it’s a viable option…if you’re smart about it. Only attempt to flee a tornado that is far away and not moving towards you. To gauge the tornado’s movement and direction, compare it to a fixed landmark like a telephone pole or tree in the distance. If it’s moving right or left, as opposed to remaining still and getting bigger, it’s not heading towards you. Drive off at a right angle from the direction it’s going. Basically you’re trying to put as many miles between you and the tornado as possible. 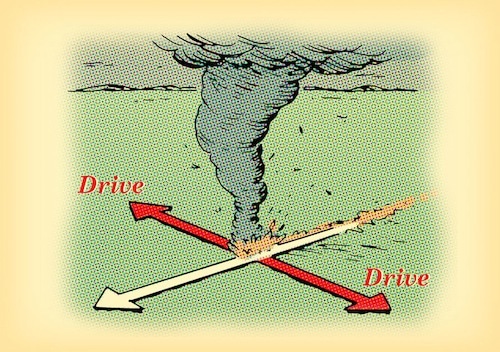 If the twister appears stationary and gets bigger, it’s coming your way and you won’t likely have time to outrun it. When I was a lad I was taught that if a tornado is bearing down on you while you’re driving, it’s always best to get out of your car and lie down in a ditch or gully, since the twister could turn your vehicle into a deadly plaything. But recent studies have actually shown that most tornados aren’t capable of hurling your car through the air, and that staying inside it can be safer than getting out. There’s still some controversy over which option is best, however.  What the Red Cross recommends is getting off the road, parking the car, and slouching down as low in your seat as you can while still keeping your seatbelt on. Duck and lean away from the windows and cover your head with a blanket or coat if you have one.

If you see that there’s an area below the level of the roadway for you to go, you may decide to get out of the car, lie facedown there, and cover your head.

The Red Cross helpfully adds, “Your choice should be driven by your specific circumstances.” Good luck with that decision! And stay safe out there, men.