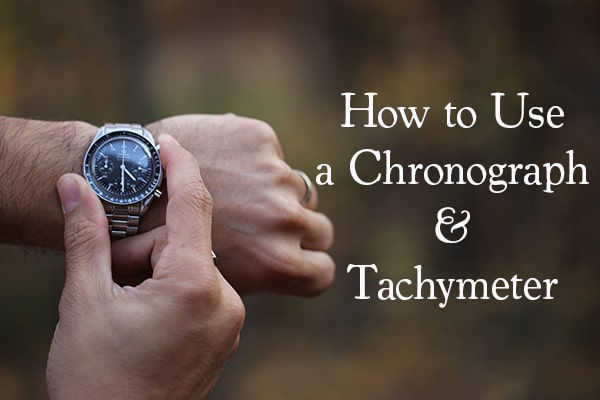 In our guide to men’s wristwatches, we discussed “complications” — the various extra features on a watch that go beyond just telling time. Two of the complications that you’ll often see on racing or pilot watches are a chronograph and a tachymeter.

They certainly make your watch look cool, but they’re not just for looks. Learning how these two watch complications work together can turn your watch into a pretty nifty measuring tool.

If you’ve been mystified by all the dials of your chronograph watch and have no idea what those tachymeter numbers around its bezel mean, then keep reading. We explain it all below.

How to Use a Chronograph

“Chronograph” is just a fancy word for “stopwatch.” They were added to watches back in the early part of the 20th century to allow racecar drivers and pilots to time themselves, and each other. Astronauts during America’s golden age of space exploration strapped watches with chronographs on their wrists too. For example, Apollo 13 astronaut Jack Swigert used the chronograph on his Omega Speedmaster to time a significant course correction on their perilous journey back to earth.

Using a chronograph is easy. You just press the start/stop button on the side of the watch to start or stop the stopwatch; push the bottom button to reset back to zero.

The more confusing part comes in understanding what the different sub-dials that make up the chronograph mean. 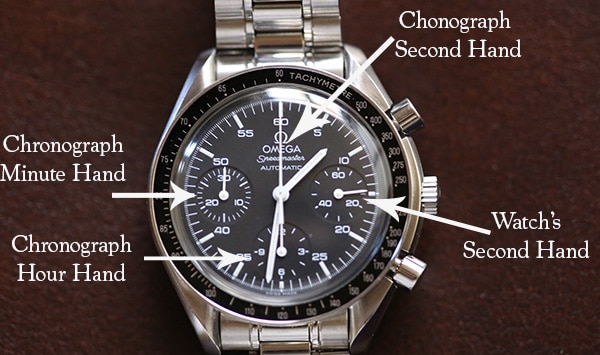 You might be thinking, “Where does a watch with a chronograph keep track of the seconds of the current time?” That’s done on one of the sub-dials on a watch’s face. On this Speedmaster, the second hand for the current time is on the right-side sub-dial.

The chronograph’s minute hand on this watch is on the left-side sub-dial. It lets you know many minutes have passed since you started the stopwatch. As you can see, it tracks up to 30 minutes.

The chronograph’s hour hand on this watch is the bottom, middle sub-dial. It tells you how many hours have passed since you started your stopwatch.

How to Use a Tachymeter 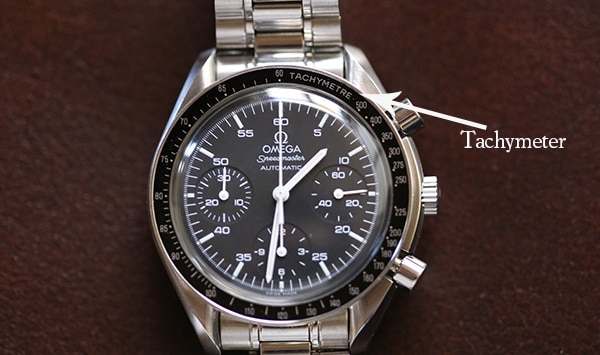 Alright, so using a chronograph is easy. It’s just a stopwatch.

Let’s move on to tachymeters. Using them requires a bit of mental math, but once you understand how to use it, you’ll be able to measure all sorts of things like speed and distance traveled, as well as fuel consumption (if you have a special ruler slide tachymeter bezel).

A tachymeter is a scale that’s inscribed around the bezel of a watch or the outside edge of the watch’s main dial. The formula to create this scale is:

Tachymeter scale value = 3,600 (number of seconds in an hour)/elapsed time in seconds

The scale allows you to convert elapsed time (in seconds per unit) to speed (in units per hour).

Most tachymeter scales only work and are valid for all elapsed times starting at about 7.2 seconds and up to 60 seconds. Notice on this Speedmaster that the scale begins at 500 at around the 7.2-second hash. So if you’re trying to measure the speed of something that has an elapsed time of less than 7.2 seconds, the tachymeter isn’t going to work for you. For things that take longer than 60 seconds to complete, you can still use a tachymeter to figure out the speed, you’ll just need to do some math. More on that in a bit.

Also keep in mind that a tachymeter can only measure known distances up to 1 full mile or 1 full kilometer. It’s possible to measure speed for objects that travel shorter or longer distances, you just need to do some math.

Let’s take a look at how to use a tachymeter to measure speed and distance in a few different scenarios.

How to Use a Tachymeter to Measure Speed

As soon as the car passes turn 1, push the start button on your chronograph. When it arrives at turn 2, stop it. According to your chronograph, it took the car 40 seconds to go from turn 1 to turn 2. 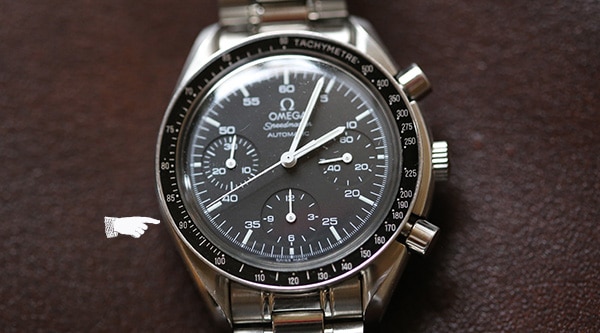 Looking at your tachymeter on your bezel, 40 seconds lines up with the 91 hash mark on the tachymeter. That means the car was averaging 91 mph as it was traveling from turn 1 to turn 2.

You can use the tachymeter for other measurement units like kilometers as well; it’s a neutral scale. For example, let’s say the racetrack you’re at is measured in kilometers. You know that the distance between turn 1 and turn 2 is exactly 1 km.

As soon as the car passes turn 1, start the chronograph. When it reaches turn 2, stop it. 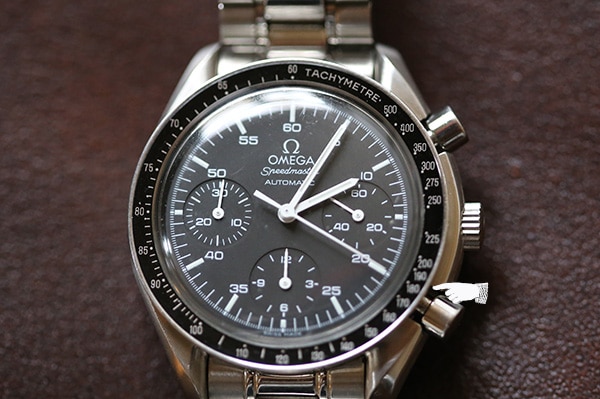 According to your chronograph, it took the car 22 seconds to go from turn 1 to turn 2. 22 seconds lines up with 180 hash mark on your tachymeter bezel, so the car was averaging 180 km/h between turn 1 and turn 2.

If you’re measuring elapsed times on distances shorter than 1 mile or 1 kilometer, you need to do a bit of math to get the average speed. Let’s say you’re watching a stock car race at Thunder Road in Barre, VT. The track is only a quarter-mile. 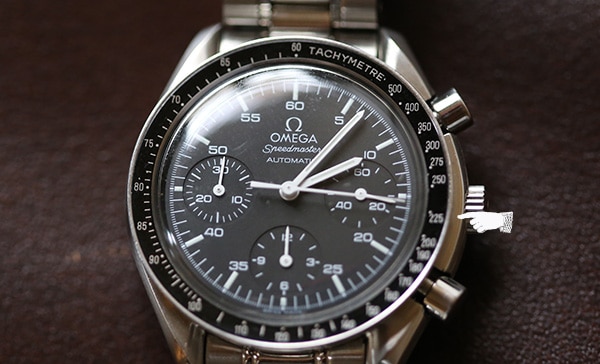 You start the chronograph when a car passes the start/finish line and stop it when it completes an entire lap. It took the car 16 seconds to complete a lap on the quarter-mile track. 16 seconds lines up with 225 on the tachymeter scale. There’s no way that car was going 225 miles per hour; to get the correct average speed, you need to remember that the track was only one-quarter of a mile. So we need ¼ of 225, which is 56.25. The car was averaging a speed of about 56 mph.

What do you do if you measure something that takes more than 60 seconds? Remember, the way the tachymeter scale is set up, it’s only good for measuring elapsed times up to a minute.

But, with a bit of math, you can still use a tachymeter to measure average speed for things that take longer than that. Let’s say you’re watching a 1-mile horse race, and you want to know how fast the winning horse was averaging. He completed the mile in 1 minute 34 seconds, or 94 seconds.

94 seconds is too long to get a speed with our tachymeter. But let’s judge his speed on half a mile. We can estimate that it took the horse 47 seconds to complete half a mile (94 seconds divided by 2 = 47 seconds). 47 seconds is within the range of the tachymeter and it lines up with the 75 hash mark. To get the average speed per hour for the full mile, we need to divide that 75 by 2, giving us an average speed of 37.5 mph.

Besides the speed of objects like cars, people, or race horses, you can even use a tachymeter to figure out how much time it takes to produce “x” amount of widgets in an hour. For example, if you want to know how many watches a watch company can make an hour, simply time how long it takes to make a watch from start to finish with your chronograph. Thanks to automation, it takes only 55 seconds. Looking at the tachymeter scale, 55 seconds lines up with 65. So a watch company can make about 65 watches in an hour.

How to Use a Tachymeter to Measure Distance

Besides measuring the speed of an object, you can also use a tachymeter to measure distance traveled. 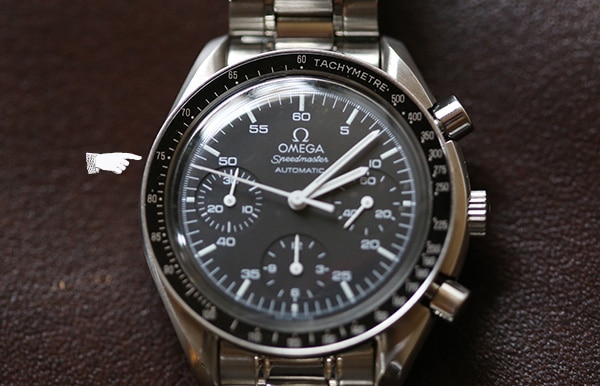 Let’s say you’re cruising on the highway at 75 mph. Start your chronograph second hand. When the second-hand reaches 75 on the tachymeter scale, it means you have traveled 1 mile.

Again, for this to work, your speed must remain constant during the entire time.

Now those dials on your chronograph watch don’t have to be so intimidating, and you can actually use and appreciate them for their function in addition to their form.