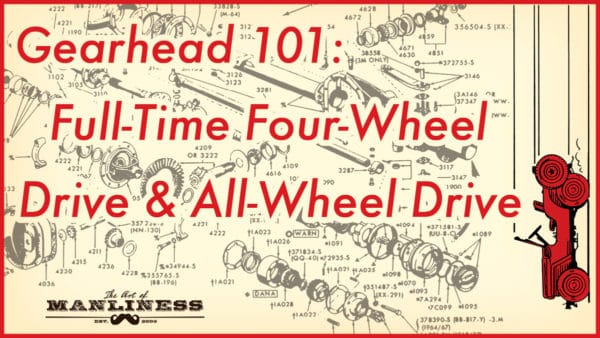 Last time we went into detail about how part-time 4WD works and why it’s beneficial to have all four wheels powering the car in low-traction situations. Today, we tackle full-time 4WD, as well as All-Wheel Drive (aka AWD).

In both drivetrain systems, all four wheels power the car all the time, and as we’ll see, they accomplish that feat using a similar drivetrain arrangement. But there are also some differences between full-time 4WD and AWD, which we’ll explain below.

The Benefits and Downsides of Full-time 4WD and AWD

As we discussed in detail in our post about 4WD, one of its benefits over 2WD is that having four wheels moving all the time significantly increases traction in low-traction situations like snow, mud, and loose dirt. If, say, your rear wheels hit a low-traction area on the driving surface, your front wheels might be on a high-traction area. With them receiving power, they can help keep your vehicle moving rather than your rear wheels just spinning while your car stays stationary.

All well and good, but why would you want all four wheels receiving power from the engine even under normal driving conditions? Why would you want 4WD on full-time, instead of just turning it on when needed?

The primary reason is improved handling. Having all four wheels moving the car allows it to take corners better and provides better directional stability when the car is moving in a steady state condition. Improved handling in normal driving conditions results in a safer drive. The improved handling benefit is one reason why you see AWD on sports cars and luxury sedans.

Another reason is convenience. Let’s say you’re driving on a road that has segments of ice and snow but is mostly dry. Instead of having to engage and disengage your part-time 4WD when you hit and leave those slick spots, with the four wheels going all the time, you don’t have to think about it. You just drive.

The big downside of full-time 4WD and AWD is that they use much more fuel than part-time 4WD because the engine has to transfer power to all four wheels, all the time.

How Full-time 4WD and AWD Work

So full-time 4WD and AWD have all four wheels moving the car all the time. But that raises the question: How do these drivetrain systems do that without jacking up the car when driving on high-traction driving surfaces?

As we discussed in the article about part-time 4WD, when you engage 4WD, the transfer case locks the front and rear drive shafts together. They send the same amount of power, or RPM, to the front and rear differentials. When making a turn on dry pavement the front wheels are forced by good traction and geometry to rotate faster than the rear wheels. But because the front drive shaft is going the same speed as the rear drive shaft, a large amount of tension is created that can eventually lead to what’s called drivetrain binding or windup. This can seriously damage your car.

So how do full-time 4WD and AWD avoid this problem?

By adding a third differential in the middle of the drivetrain.

Just like on part-time 4WD vehicles, full-time 4WD and AWD have both a front and rear differential on the front and rear axles that allows the left and right wheels to move at different speeds when making a turn. This prevents the wheel skip that would occur with all four wheels moving. 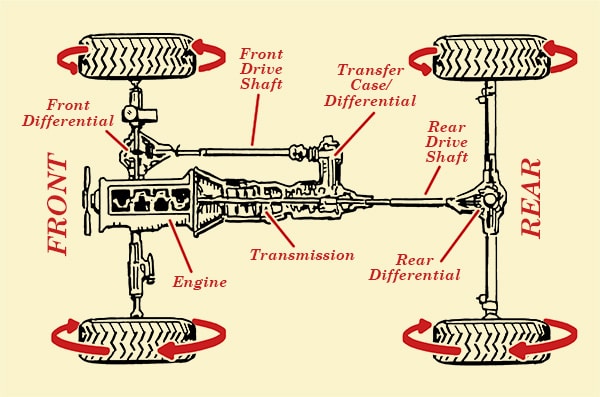 So the center differential is what allows full-time 4WD and AWD to send power to all four wheels at the same time, all the time.

What’s the difference, then, between full-time 4WD and AWD?

What Makes Full-Time 4WD Not AWD: A Locking Center Differential 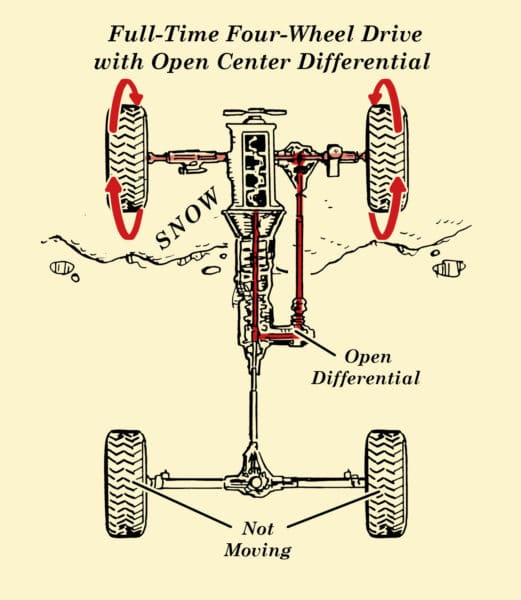 Let’s say you’re in a full-time 4WD or AWD vehicle with a center open differential. You’re driving up your driveway, and the front wheels hit a patch of icy snow. You think “I’ve got AWD! This shouldn’t be a problem.” But it is. Those front wheels have the least amount of traction, and consequently represent the path of least resistance. So the center differential is going to send all the power to the front wheels, causing them to spin in place while your rear wheels just sit there on dry pavement not moving at all. To get up the driveway, it’d be nice to have those rear wheels getting some power.

So in our snowy driveway scenario, a full-time 4WD or AWD vehicle with a center LSD would send some of the engine’s power to the rear wheels that have traction instead of all of it to just the front wheels that have no traction, allowing you to get your car up the driveway.

Limited slip differentials definitely improve traction compared to open differentials. For most 4WD scenarios, LSDs are all you need for adequate traction. But LSDs still don’t provide optimal traction because most of the power is still going to the wheels with less traction. There’s still a chance of wheel slip.

Some full-time 4WD vehicles increase the traction capabilities in low-traction settings by having options to lock the rear differential, or even both the front and rear differentials, turning the vehicle into a true 4×4.

Many full-time 4WD vehicles also have the option to shift to Lo-gear, allowing you to deliver more power to your wheels while going at lower speeds.

AWD vehicles don’t have the option for a locking center differential, so they don’t provide as much traction in slippery scenarios as 4WD vehicles. While AWD can help improve handling on normal driving surfaces, and can improve traction on rainy roads and a bit on snow-covered roads, you wouldn’t want to take an AWD vehicle off-roading. That’s what trusty 4WD is for.

Well, there you go. The basics of how full-time 4WD and AWD work. With that, we’ve pretty much covered the drivetrain on a car. Next up in our Gearhead 101 series: the transmission.