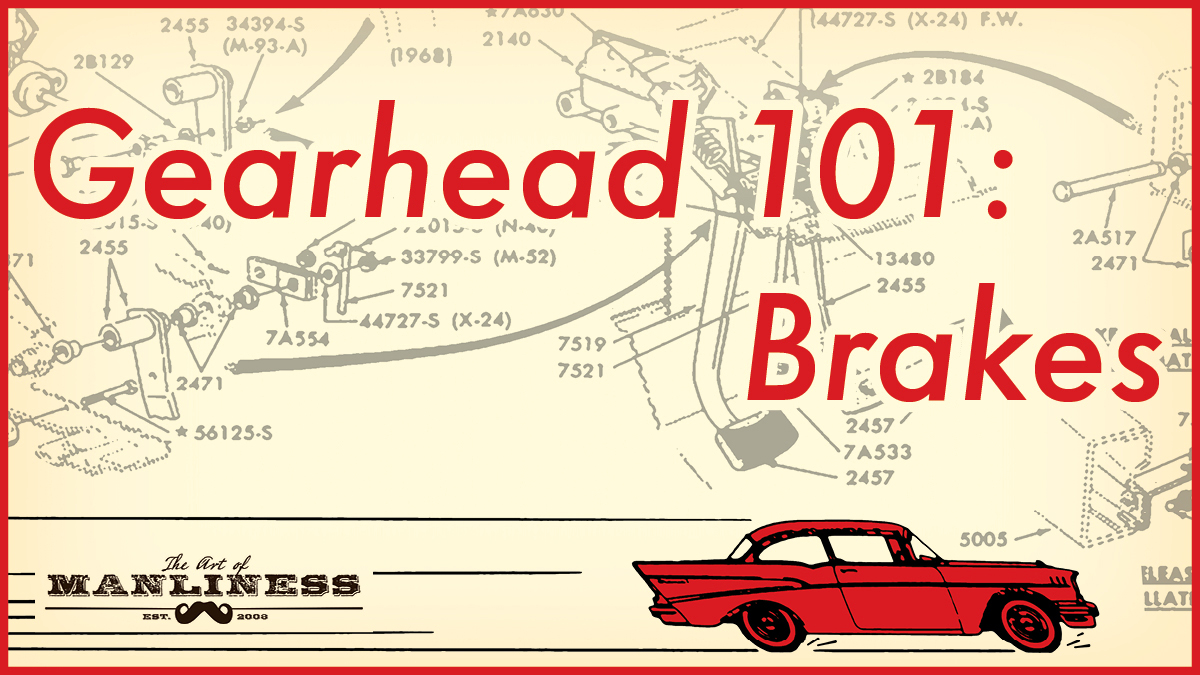 If you’ve been following Gearhead 101, you know how a car engine works, how the engine transfers the power it generates via the drivetrain, and how a manual or automatic transmission functions as a sort of power switchboard between the engine and the drivetrain.

Today we’re going to discuss the automotive system that you use hundreds of times a day, the failure of which would likely kill or seriously injure you.

I’m talking about your brakes.

But there are two different ways to skin this motion-into-heat-energy cat, and a few other parts that allow them both to work.

The Parts of a Car’s Brake System 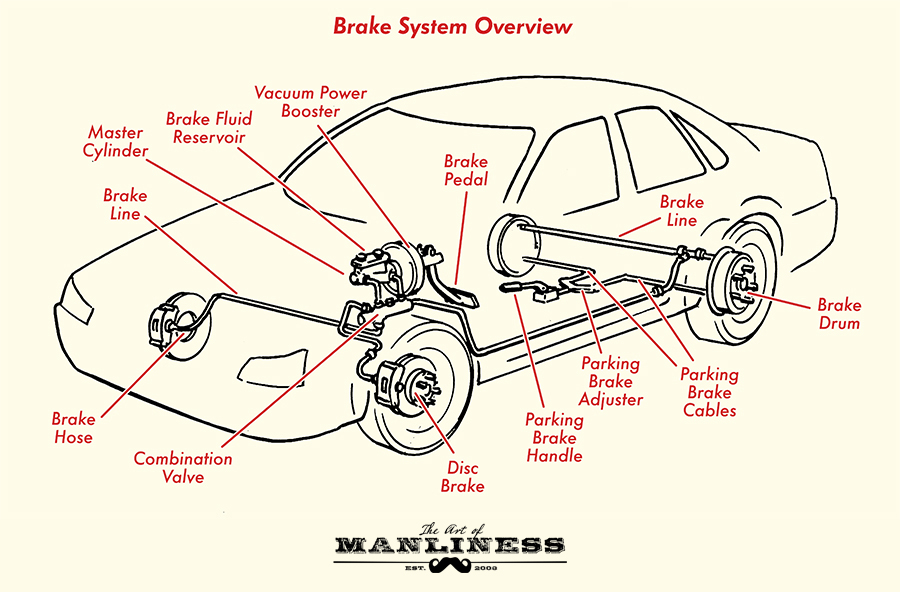 Brake pedal. You’re familiar with the brake pedal. It’s the lever you press with your foot to slow down and stop the car. The brake pedal on most modern cars connects to a . . .

Brake booster. Today most vehicles have what’s called “power brakes.” Power brakes increase the force produced from your pressing on the pedal, which is applied to the rest of the braking system. That means you don’t have to press down on the brake pedal with too much effort to get your car to slow or stop. The brake booster is what makes power brakes, power brakes. 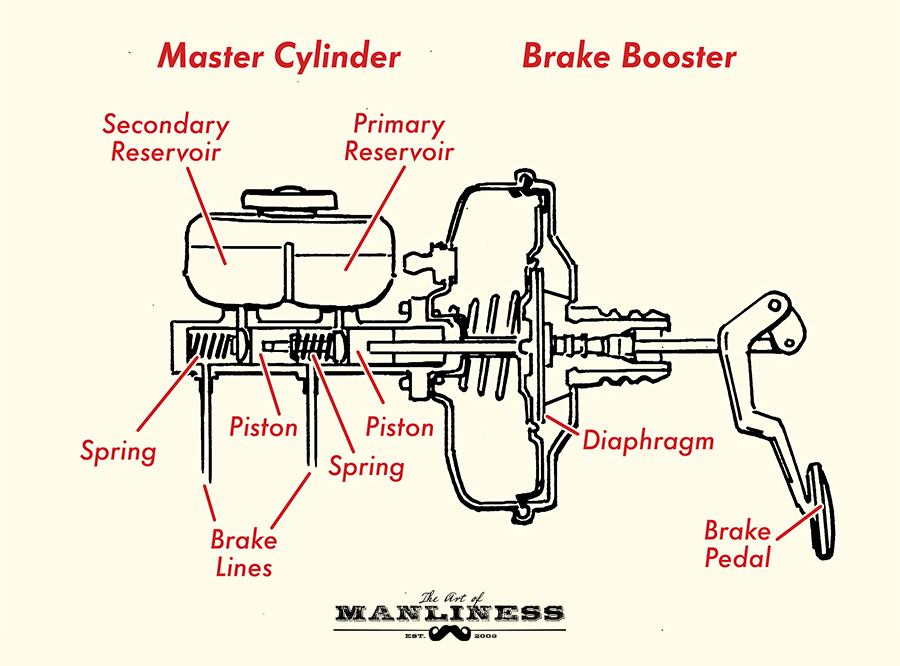 The master cylinder ensures that equal hydraulic power is sent to all four brakes. If one brake was to get more power than the other, it would result in uneven braking pressures, which would cause an unsafe slowdown or stop. Imagine what would happen to your car if your right wheels were to slow down faster than your left wheels. You’d fishtail or possibly flip the car.

Most modern master cylinders are divided into two reservoirs, each filled with brake fluid. This is called a dual brake system. It acts as a fail safe in the event there’s a leak or a fluid block on either the front or rear brakes.

Of course, if both reservoirs and the brake lines leading out of them are leaking or blocked, none of the brakes will work. That’s what’s called a catastrophic brake failure.

Brake lines. Brake lines are steel tubes that leave from the master cylinder and go to each of the four brakes on your car’s wheels. The brake lines transfer the brake fluid to either a drum brake or a disc brake. The pressure from the fluid activates the brakes. 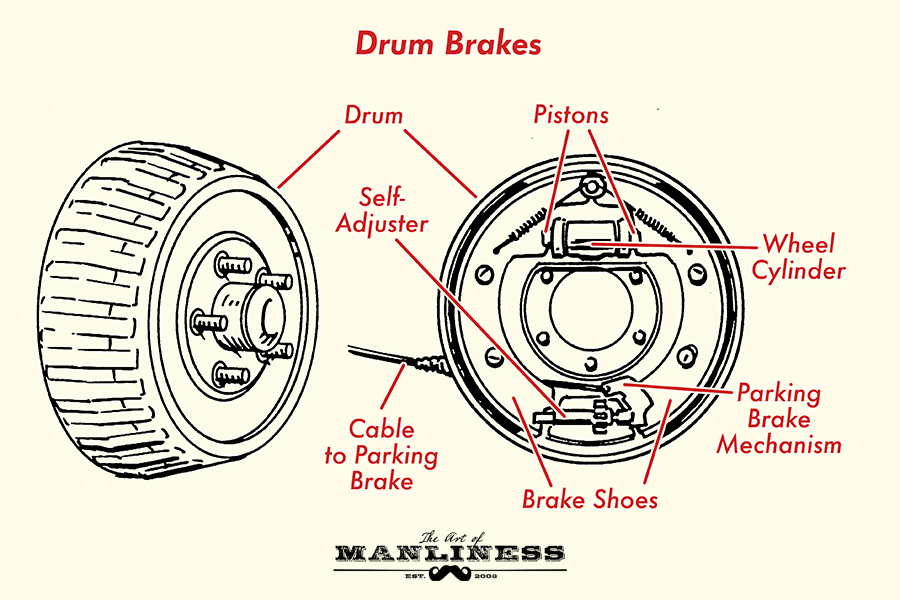 Drum brakes. There are two types of braking devices used on cars: drum brakes and disc brakes. Drum brakes have been on cars since 1900 and they’re still used today. Drum brakes attach to the wheel. The inside of the drum contains two heat resistant pads called brake shoes. When you press the brake pedal, brake fluid goes into the drum brake’s wheel cylinder. The fluid then activates two small pistons inside the wheel cylinder which push the brake shoes out and squeeze them against the brake drum. The pads slow the drum, and the drum (which is attached to the wheel) slows the wheel down.

The advantages of drum brakes are several: they’re cheap to make and repair, they require less hydraulic pressure to activate, and they can last longer than disc brakes.

As mentioned above, drum brakes are still used on cars today. If a car has drum brakes, you’ll typically find them on the rear wheels of the vehicle. 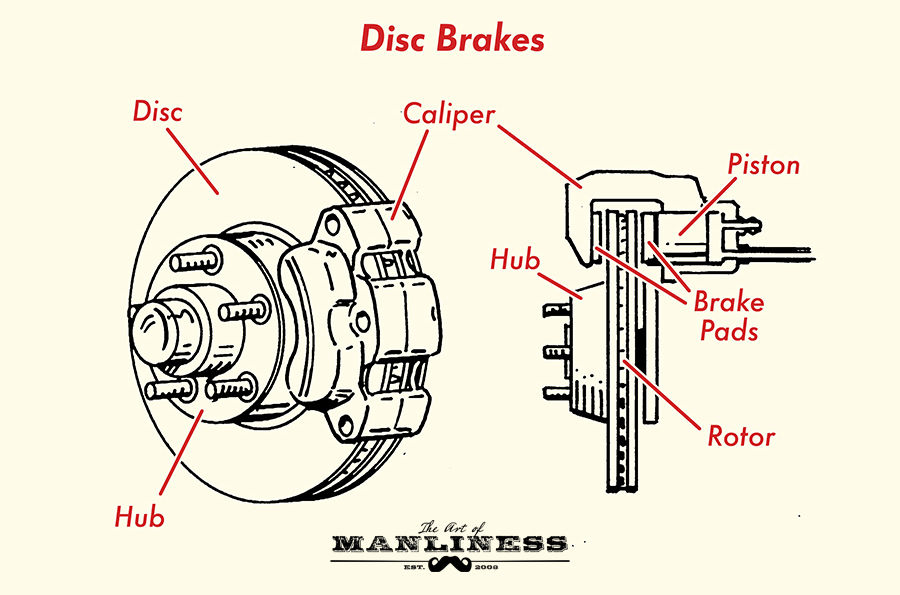 Disc brakes. One of the downsides of drum brakes is that they’re self-contained. The heat that’s created from friction in the brake pads stays inside the drum brakes. Under intense conditions and frequent braking, drum brakes can get really, really hot. If the brakes get too hot, they can no longer produce the friction needed to slow the car down.

To solve for that problem, engineers developed the disc brake.

Disc brakes operate in a pretty simple fashion. You step on the brake pedal, and brake fluid is sent to a piston on the disc brake. The piston causes the calipers to squeeze the disc or rotor. The pads inside the calipers create friction, which slows down your car.

Instead of pressing out against a drum to slow the car down, the calipers found on disc brakes squeeze the brake pads in towards a metal disc attached to the wheel. Squeezing in with calipers does a few things to improve braking. First, it allows you to create more pressure, which aids in increasing friction. Second, the disc brake design is open. The brakes aren’t inside of a drum. This allows the air to cool them off much more quickly, which also increases friction. Finally, the design allows for increased surface area of the brake pad, which again helps increase friction.

Disc brakes were first used on race cars in 1951. In 1955, they started appearing on mass-produced cars. By the 1980s, most cars were using disc brakes, at least on the front wheels.

So let’s put all the parts of the braking system together.

If the wheel has a disc brake, the brake fluid will activate a piston that will cause calipers that have brake pads to squeeze against a disc, or rotor, attached to the wheel, slowing the car down. When you release the brake pedal, the brake fluid flows back into the master cylinder, causing the calipers on the disc brake to open up again.

That, in a nutshell, is how your car’s brakes work.

What About Antilock Brakes? 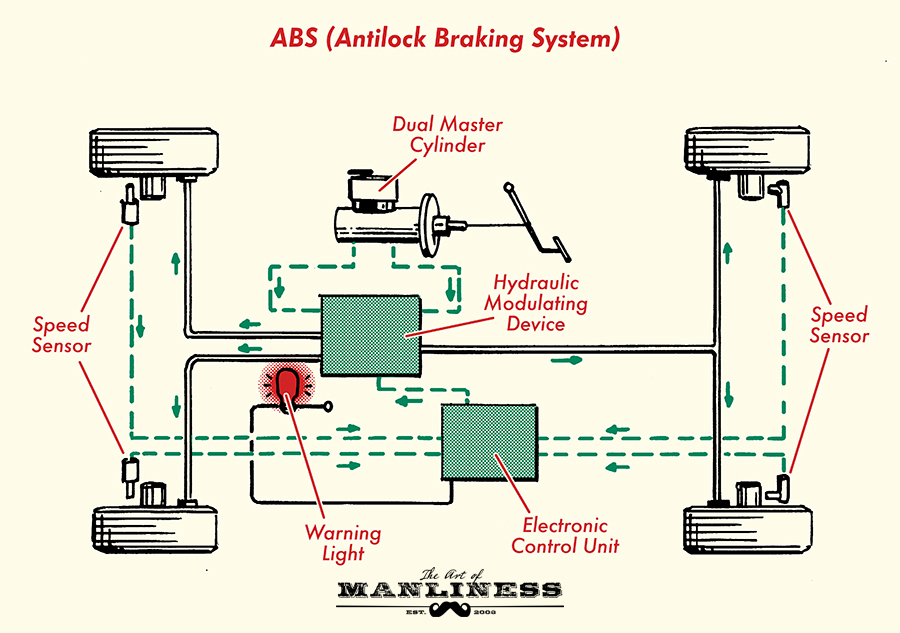 But wait . . . there’s more. Your car likely has antilock brakes (ABS). Before ABS, when you slammed on the brakes, your wheels completely stopped. They locked up. This caused your tires to skid. A skidding tire provides you little or no control to steer the car. So if you were driving a car back in 1950 and had to suddenly slam on the brakes to avoid hitting a kid that ran out into the middle of the street, you’d still skid forward and you’d have no ability to steer the car left or right. If you wanted to avoid a skid when you used the brakes on old cars, you’d have to repeatedly pump the brake (to repeatedly release and lock up the wheels) which is easier said than done.

To avoid tire skidding, ABS uses a computer and sensors near each wheel to monitor wheel speed. When you apply strong pressure to the brake pedal, the ABS system is checking the speed of each wheel independently. If one wheel is going slower than the other wheels, it means that that wheel is likely locked up. So the ABS system will reduce the hydraulic pressure sent to that brake, which will allow it to turn again, preventing a skid and allowing you to maintain steering control.

You know your ABS is working because when you slam the brake pedal, you can feel the brake pulsating. Don’t be alarmed. Keep applying pressure. You don’t want to pump the brakes on cars with ABS or else they won’t work properly.

When you get a new car, it’s always a good idea to get a feel for its ABS system so you’re not freaked out a little the first time you feel it engage. You can do this by driving in an empty parking lot when it rains or snows (which will induce a bit of skidding) and slamming on the brakes.