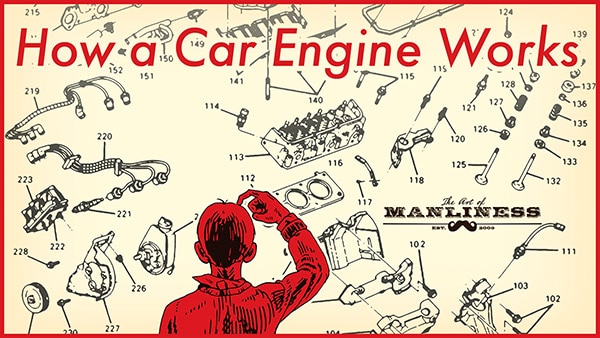 I’ve never been a car guy. I just didn’t have any interest in tooling around under the hood to figure out how my car works. Except for replacing my air filters or changing the oil every now and then, if I ever had a problem with my car, I’d just take it into the mechanic and when he came out to explain what was wrong, I nodded politely and pretended like I knew what he was talking about.

But lately I’ve had the itch to actually learn the basics of how cars work. I don’t plan on becoming a full on grease monkey, but I want to have a basic understanding of how everything in my car actually makes it go. At a minimum, this knowledge will allow me to have a clue about what the mechanic is talking about the next time I take my car in. Plus it seems to me that a man ought to be able to grasp the fundamentals of the technology he uses every day. When it comes to this website, I know about how coding and SEO works; it’s time for me to examine the more concrete things in my world, like what’s under the hood of my car.

I figure there are other grown men out there who are like me — men who aren’t car guys but are a little curious about how their vehicles work. So I plan on sharing what I’m learning in my own study and tinkering in an occasional series we’ll call Gearhead 101. The goal is to explain the very basics of how various parts in a car work and provide resources on where you can learn more on your own.

So without further ado, we’ll begin our first class of Gearhead 101 by explaining the ins and outs of the heart of a car: the internal combustion engine.

It wouldn’t be until 1860 that a reliable, working internal combustion engine would be invented. A Belgian fellow by the name of Jean Joseph Etienne Lenoir patented an engine that injected natural gas into a cylinder, which was subsequently ignited by a permanent flame near the cylinder. It worked similarly to the gunpowder atmospheric engine, but not too efficiently.

Building on that work, in 1864 two German engineers named Nicolaus August Otto and Eugen Langen founded a company that made engines similar to Lenoir’s model. Otto gave up managing the company and started working on an engine design that he had been toying with since 1861. His design led to what we now know as the four-stroke engine, and the basic design is still used in cars today.

The Anatomy of a Car Engine 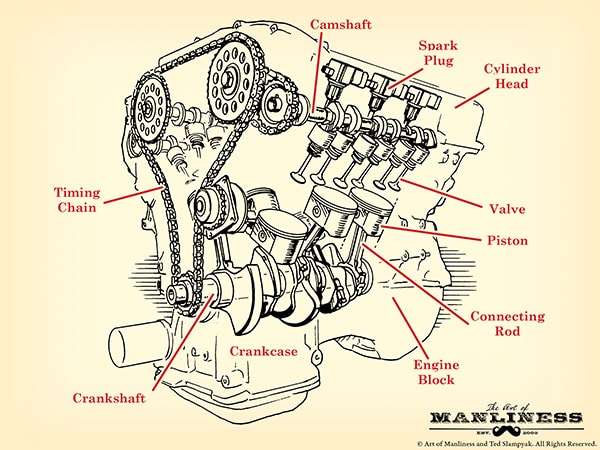 I’ll show you how the four-stroke engine works here in a bit, but before I do, I thought it would be helpful to go through the various parts of an engine so you’ll have an idea of what’s doing what in the four-stroke process. There is terminology throughout these explanations that relies on other terms in the list, so don’t worry if you get confused at first. Read through the whole thing to get an overall grasp, and then read it again so you have a basic understanding of each piece as it’s being talked about.

The engine block is the foundation of an engine. Most engine blocks are cast from an aluminum alloy, but iron is still used by some manufacturers. The engine block is also referred to as the cylinder block because of the big hole or tubes called cylinders that are cast into the integrated structure. The cylinder is where the engine’s pistons slide up and down. The more cylinders an engine has the more powerful it is. In addition to the cylinders, other ducts and passageways are built into the block that allow for oil and coolant to flow to different parts of the engine.


Great question! It has to do with the shape and number of cylinders an engine has. In four-cylinder engines, the cylinders are typically mounted in a straight line above the crankshaft. This engine layout is called an inline engine.

Another four-cylinder layout is called the “flat four.” Here the cylinders are laid horizontally in two banks, with the crankshaft going down the middle.

On the top of the piston, you’ll find three or four grooves cast into the metal. Inside the grooves piston rings are put in. The piston rings are the part that actually touch the walls of the cylinder. They are made from iron and come in two varieties: compression rings and oil rings. The compression rings are the top rings and they press outward on the walls of the cylinder to provide a strong seal for the combustion chamber. The oil ring is the bottom ring on a piston and it prevents oil from the crankcase from seeping into the combustion chamber. It also wipes excess oil down the cylinder walls and back into the crankcase.

The crankshaft resides in what’s called the crankcase on an engine. The crankcase is located beneath the cylinder block. The crankcase protects the crankshaft and connecting rods from outside objects. The area at the bottom of a crankcase is called the oil pan and that’s where your engine’s oil is stored. Inside the oil pan, you’ll find an oil pump that pumps oil through a filter, and then that oil is squirted on to the crankshaft, connecting rod bearings, and cylinder walls to provide lubrication to the movement of the piston stroke. The oil eventually drips back down into the oil pan, only to begin the process again

The camshaft is the brain of the engine. It works in conjunction with the crankshaft via a timing belt to make sure intake and outtake valves open and close at just the right time for optimal engine performance. The camshaft uses egg-shaped lobes that extend across it to control the timing of the opening and closing of the valves.

The valvetrain is the mechanical system that’s mounted to the cylinder head that controls the operation of the valves. The valve train consists of valves, rocker arms, pushrods, and lifters.

Rocker arms are little levers that touch the lobes, or cams, on the camshaft. When a lobe lifts one end of the rocker, the other end of the rocker presses down on the valve stem, opening the valve to let air in to the combustion chamber or letting exhaust out. It works sort of like a see-saw.

With direct fuel injection, each cylinder gets its own injector, which sprays fuel directly into the combustion chamber at just the right time to combust.

With ported fuel injection, instead of spraying the fuel directly into the cylinder, it sprays into the intake manifold just outside the valve. When the valve opens, air and fuel enter the combustion chamber.

Above each cylinder is a sparkplug. When it sparks, it ignites the compressed fuel and air, causing the mini-explosion that pushes the piston down. 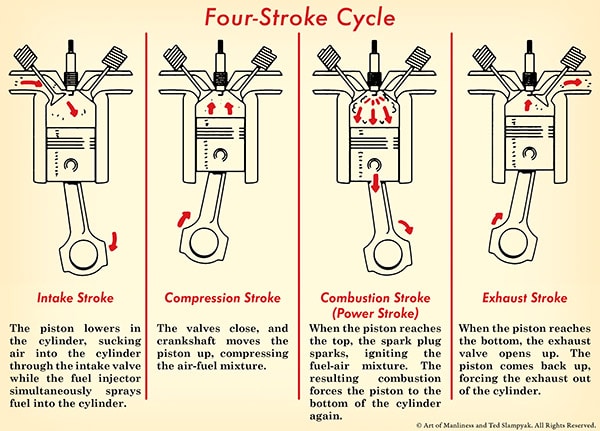 So now that we know all the basic parts of the engine, let’s take a look at the movement that actually makes our car move: the four-stroke cycle.

The above illustration shows the four-stroke cycle in a single cylinder. This is going on in the other cylinders as well. Repeat this cycle a thousand times in a minute, and you get a car that moves.

Well, there you go. The basics of how a car engine works. Go take a look under your car’s hood today and see if you can point out the parts that we discussed. If you’d like some more info on how a car works, check out the book How Cars Work. It has helped me out a lot in my research. The author does a great job breaking things down into language that even the total beginner can understand.