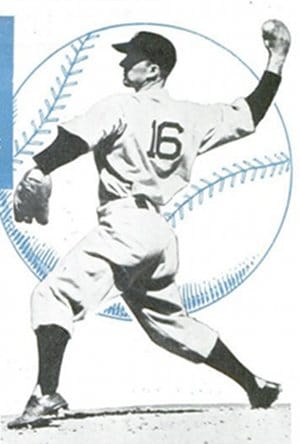 As a Little Leaguer, I spent countless hours learning and mastering several baseball pitching grips. For me, the grips to throw breaking balls or fastballs were akin to the grips of a secret society.  I felt I was taking part in a secret baseball tradition that went back for generations and that by mastering them I would unlock an occult baseball power that would make me unstoppable on the mound. Yeah, I was a nerd.

While I was throwing the ball around with my brother a few weeks ago, I realized that my pitching skills had gotten a little rusty since my younger days. I was having a hard time putting that spin on the curveball and making the splitter sink correctly. So I did some reviewing and figured I’d share with you all what I learned. Whether you’re just wanting to throw the ball around for fun or you want to initiate your son into the secrets of pitching, here are the ins and outs of the 7 baseball pitching grips every man should know. 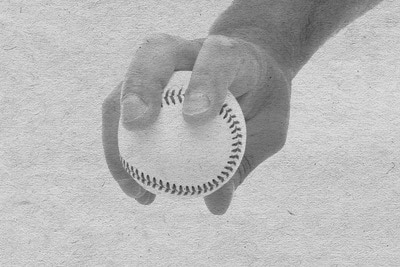 This is probably the first baseball pitching grip you learned when you first learned how to throw a baseball. The four-seam fastball is fast, but it also affords pitchers a great amount of control over where they place their pitch.

To grip a four-seam fastball, place your index and middle fingertips across the perpendicular seams of the baseball. Place your thumb directly underneath the ball. Your thumb tip should rest on smooth leather, not on a seam.

When holding the baseball, don’t smother the ball close to your palm. Hold it more by the fingertips so that the ball is as much as an inch away from the palm. This ensures that there’s the least amount of friction between your hand and the ball. Less friction means the ball can leave your hand faster.

Throw the ball at full velocity. When the ball is released, the batter will see four parallel seams spinning towards him, hence the name “four-seam fastball.” 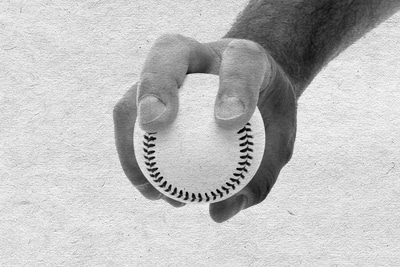 To grip a two-seam fastball, place the index and middle fingers directly on top of the narrow seams as shown in the picture above. Place your thumb directly underneath the baseball. Your thumb tip should touch the smooth leather, not the seam.

Unlike the four-seam fastball, you want to hold the ball tighter and closer to your hand with a two-seam fastball.

Throw the ball at full velocity. When you release the ball, the batter will see only one pair of horizontal seams spinning towards him. 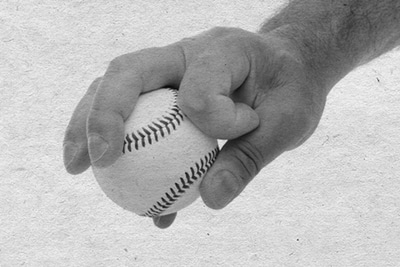 After you’ve thrown a few heaters at your batter, he’ll start to get a sense of your timing. That’s when you want to throw him off with a change-up pitch. A change-up looks just like a fastball, except when the ball leaves your hand it does so much more slowly. When throwing a change-up, your arm velocity and body mechanics should be exactly the same as when you’re throwing a fastball. The only difference is the baseball pitching grip. Because it looks like you’re throwing a fastball, but the ball is moving slower, the batter will usually swing too early, either missing the ball completely or fouling it off.

There are several change-up grips, but my favorite was the circle change-up. Make a circle with your thumb and index finger like you’re giving someone the “okay!” sign (Note: unless you want to get smacked, don’t make the “okay” sign while visiting Latin America or any of the Mediterranean countries). Place the ball in your palm and hold it with your three other fingers. The ball should fit nice and snug against your circle.

When you pitch the ball use the exact same arm speed and body mechanics as you would with a fastball.  For a change-up to be effective, you need to sell the batter that you’re throwing him another fastball. The grip will slow the ball as it leaves your hand.

Pedro Martinez of the Philadelphia Phillies has a killer circle-change up. 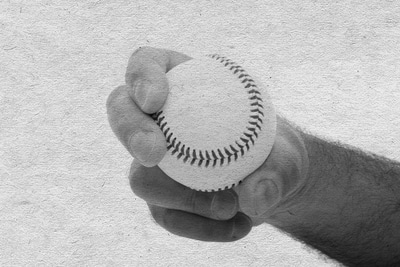 The curveball is a great pitch to have in your arsenal in order to throw off and fool batters. A curveball slightly sinks as it reaches the catcher’s glove. Moreover, when thrown correctly, a curveball can appear to be outside the strike zone, but then suddenly break back in towards the plate so that it’s a strike.

How does a curveball make these movements? Well, part of it is an optical illusion. When we look at a curveball with its unique spin in our periphery, the ball appears to curve more than it actually does.

The delivery of the curveball is a bit different than the fastball. First, when throwing a curveball, you want to keep your elbow equal with or slightly above your throwing shoulder. This will reduce the amount of stress placed on your arm when you rotate your wrist. Also, try to release the ball closer to your body than you would with a fastball, as this will result in tighter rotation.

When you release the ball, rotate your thumb upwards, and your middle and index fingers downward. To do this, simply rotate your wrist out and down. You want the ball to rotate off your index finger when it leaves your hand. This twist in your wrist will give the ball its forward top-bottom rotation that will make the ball break.

Because of the shortened arm action and the rotation on the ball, curveballs are much slower than fastballs.

The curveball has been around since the 1870s. Historians debate whether Fred Goldsmith or Candy Cummings invented the pitch. Notable curveball pitchers include Steve Carlton, Nolan Ryan, Dwight Gooden, and David Wells. 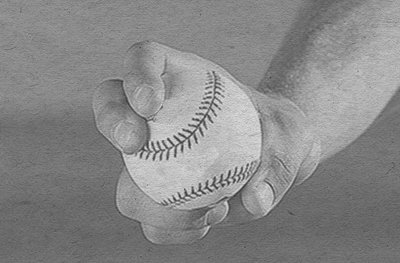 Hitting legend Ted Williams once said that “the slider is the best pitch in baseball.” Sliders drive batters batty because they’re faster and break much later than curveballs. When the ball does break, it does so laterally and down.

Position the ball much in the same way as you would position a two-seam fastball, only now place your middle and index fingers next to the right seam as shown in the picture above. Your ring finger should rest on the side of the ball. Place your thumb directly underneath the ball on the smooth leather. Squeeze the ball between your middle finger and thumb.

Arm speed is the same as a fastball. You don’t have to twist your wrist when you throw it because the way you’re holding the ball will create the spin necessary for the ball to break. Just make sure you keep your wrist loose so you can get a nice wrist-snap; this will give the ball more spin when you release it. If you gripped the ball correctly, it should spin off your index finger from the outside of the ball. 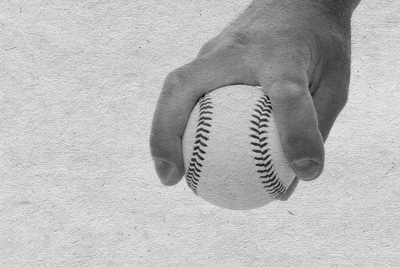 The delivery and release is just like a two-seam fastball pitch. The ball will start dropping during the last 15 feet in flight.

Roger Craig is credited with inventing the pitch. Bruce Sutter, David Cone, and Rich Harden used the splitter effectively during their careers. 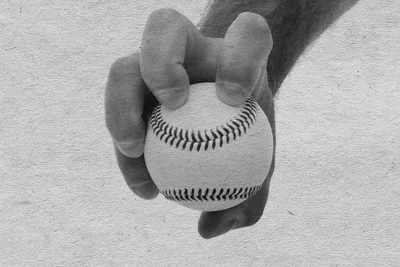 The knuckleball plays mind games with the batter. It has an erratic motion that makes it hard for the batter to hit. From the batter’s point of view the ball looks like it’s floating while making darting movements in different directions. What gives a knuckleball its weird motion is that there’s hardly any spin on the ball. Scientific America actually went into some detail in explaining the physics of a knuckleball. Here’s what they had to say:

For a knuckleball, the important thing is that the ball rotate about an axis so that the seams are on one side of the front of the ball at one instant, whereas a little later they are on the other side of the front of the ball. The ball will then drift in the direction of the leading seam, and then drift back when the seam becomes exposed on the other side. The seams produce turbulence in the air flowing around the ball, disturbing the air layer traveling with the ball and thereby producing a force on the ball. As the ball slowly rotates, this force changes, causing the ball to “flutter” and slowly drift.

Got that? Good, because there will be a test on it.

To grip the knuckleball, position the ball in the same way as you would in the two-seam fastball or the splitter. Now, instead of laying your fingers along the seam of the ball, dig your fingertips into the leather. Don’t touch the seams at all. (See picture above). Place your thumb directly under the ball. Again, don’t touch the seam.

The knuckleball is the slowest pitch, and it’s the most difficult to throw. Because of it’s unpredictable motion, knuckleballs can result in a lot of wild pitches.

Lew “Hicks” Moren is credited with inventing the knuckleball during the 1900s, but Eddie Cicotte is often associated with the pitch mainly because of his fame from the Black Sox Scandal.  There are only two MLB pitchers today who use the knuckleball: Tim Wakefield and Charlie Haeger.

What are your favorite baseball pitching grips? Have any pointers on delivering a killer fastball? Share them with us in the comments section.