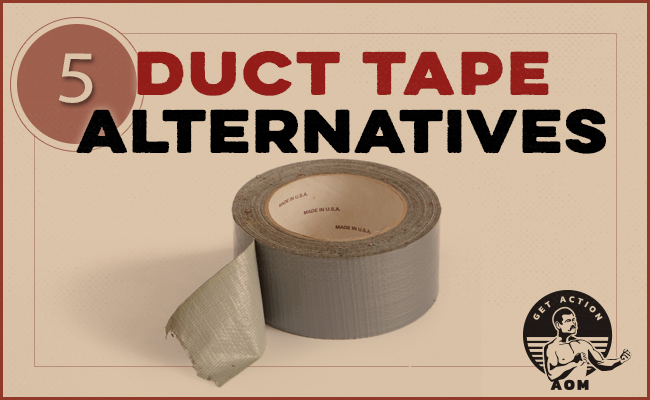 Editor’s Note: This is a guest article by Brett Stone.

If you stop and think for a second, you can probably name two or three places where you have partially used rolls of a sticky, gray, string mesh-reinforced polymer fix-all stashed around your house, garage, and vehicles.

Good ‘ol duct tape: it’s as ubiquitous as it is time-tested. Before it was used for household fixes, it saw action in World War II as a jerry-rigged repair for vehicles and weapons. Later, the venerable tape even went to the moon and helped Apollo 17 astronauts improvise a needed fender extension on the lunar rover. It’s still popular today with more varieties, colors, and patterns than ever.

But despite its popularity and storied history, there are situations where duct tape may not actually be the best choice. Check out these five, too-often overlooked alternatives to duct tape that you may want to consider stashing alongside your old gray standby:

Ever tried to remove and then replace duct tape more than once or twice only to find that the tack or “stickiness” that held it in place so well the first time had weakened significantly, maybe entirely? Loss of tackiness, while likely to improve your social interactions, is less beneficial when it comes to holding pieces of something together. Enter another space-proven tool: Velcro.

More properly called “hook and loop fasteners” unless you’re specifically referring to the brand name product (for why, check out this YouTube video), Velcro also saw action on Apollo missions, including on the astronauts’ space suits.

Double-sided pull-apart Velcro straps come in rolls and a variety of widths. Open and close as many times as you want; the tiny hooks and loops keep on keeping on without losing their grip.

When you need the surfaces of two different planar objects to stick to each other, you may be tempted to roll a piece of duct tape into a cylinder with the sticky side out to put between the surfaces. But wouldn’t it be great if the two surfaces could just magically stick to each other without the awkward and weak gap caused by rolled up tape?

It’s not magic, but it does come in an aerosol can. Spray on adhesives like 3M’s Super 77 Multipurpose can bond cardboard, paper, fiberglass insulation, even carpet after only about 15 seconds. What’s more convenient than that?

Advertised with the bold claim that its repair wrap is 100X stronger than duct tape, FiberFix is basically a resin-based fiber composite for those of us who don’t work on jet aircraft or Formula One racecars (where fiber-reinforced composites are common). It’s most useful for broken cylindrical items — think shovel or broom handles, metal or plastic pipes, chair legs, etc. The resin in the fiber-infused wrap begins to cure with exposure to moisture; in about 15 minutes, it hardens into a strong, waterproof barrier around whatever you wrapped.

Also known as cable ties, zip ties use a small clip mechanism or “cased ratchet” to lock onto grooves cut into long, narrow plastic straps and were originally developed to help manage the masses of cables in aircraft. Impressively strong and inexpensive, the uses for these ties abound: Temporary gate or luggage lock? Check. Need to give your car’s plastic fender “stitches” until you can get it to the body shop after it kissed the corner of the house? Check. Oh, or maybe you want to manage the unruly tangle of cables behind your desktop computer? Checkmate.

Duct tape is useful for all sorts of things. We’ve all seen the duct tape boats, duct tape prom suits and dresses (there’s a scholarship for that — really), and duct tape wallets. A study even found that duct tape is more effective than cryotherapy for removing warts. Yet ironically enough, for all of duct tape’s amazing uses, one that you shouldn’t use it for is the one from which it takes its name.

While duct tape was originally known as duck tape because it was made from duck cloth material, after WWII, people started calling it duct tape, because it was used in the HVAC industry to wrap air ducts.

But as it turns out, the tape is not at all suited to this purpose.

Lawrence Berkeley National Laboratory in California built an HVAC test system that alternated between blowing air at home furnace and air conditioner temperatures through ducting to simulate the stresses an HVAC system experiences over its life. They then sealed the ducting joints with a variety of methods, including duct tape.

“Of all the things we tested, only duct tape failed. It failed reliably and often quite catastrophically,” said Max Sherman, head of the Energy Performance of Buildings Group.

So much for using duct tape on ducts.

What should you use on your dryer or HVAC ducting instead? While there are a variety of options, mastic, a putty-like substance that comes in a tub or a squeeze tube, is the option most often recommended.

Dr. Brett Stone is a husband and father of two beautiful children. Before he began teaching as a professor of mechanical engineering at Utah Valley University, he worked as a design engineer in the aerospace industry helping to design rockets, airplanes, and satellites. Connect with him on LinkedIn.