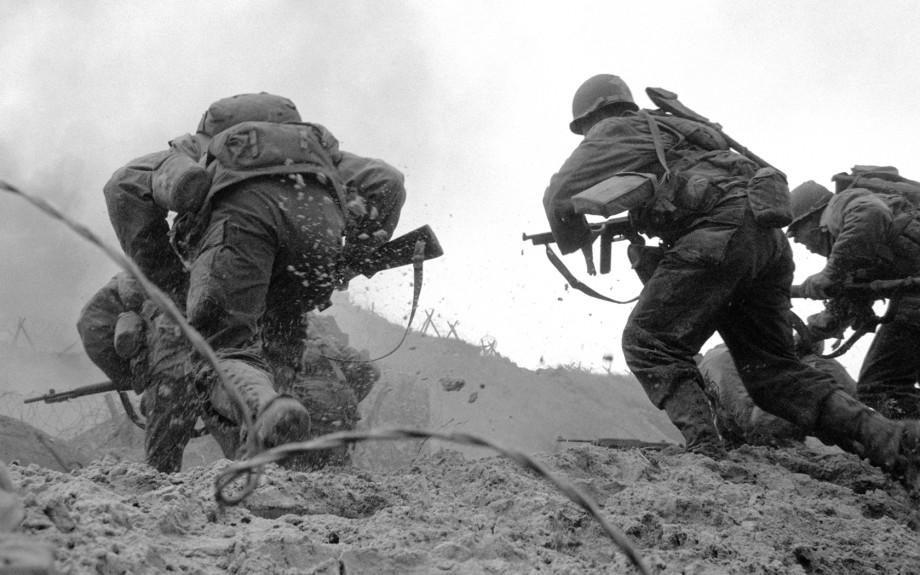 Editor’s note: The following excerpt was included in FM 21-13, an Army field manual published in 1952. As with all discourses on the art of war, it’s interesting both on a literal level, as well as in its applications to the practice of strategy and teamwork in endeavors beyond the battlefield.

Your job in the Army is to be ready to do your duty when your country needs you. You may be a rifleman, truck driver, or clerk; you may be in any branch of the Service. Regardless of your assignment, you as a soldier must be prepared to fight. You will probably not be sent out to fight by yourself, but rather you will be cooperating with other soldiers under your unit leader. Experience has shown that men working as a team have increased confidence and efficiency because each protects and assists the others. You should be able to withstand successfully without assistance, using only your personal resources of weapons, initiative and courage, the excessive pressure imposed on you by enemy infiltration tactics and guerrilla warfare.

You must learn to move quickly and quietly over various types of terrain by day and by night. In combat you may frequently be required to move close to or within the enemy’s position. To do this, you must be highly skilled in moving silently and in taking advantage of cover and concealment. You must be able to find your way across strange terrain by using a map and compass. Your eyes must be trained to see in daylight and at night. You must develop patience. You must know what to look for and how to report it promptly and accurately. You must learn how to capture, how to kill, and how to stay alive. Learn your combat lesson so well that doing the right things becomes habitual; then when you go into combat you will perform automatically and correctly.

In this phase of your training, you will learn active and passive measures to take for your own protection; you will learn how to go out on patrol and collect information; and you will gain confidence in yourself as a soldier who has learned to take care of himself under any circumstances.

The Four F’s of Fighting

You will find that there are four main steps that are followed in all types of offensive combat and these are followed whether performed by a squad or by several armies working together. These basic combat principles are sometimes called “the Four F’s of Fighting”: FIND ‘EM, FIX ‘EM, FIGHT ‘EM, and FINISH ‘EM!

You can’t fight an enemy if you don’t know where he is. When you are sent on reconnaissance, you will be expected to find out all you can about the enemy, where he is, what weapons he has, his strength in men and equipment, and where the strongest and weakest parts of his defenses are located. You want to know whether he is in woods, gullies, trenches, or in the open; whether he is on top of hills, astride roads, or behind streams, and what concealment your unit might use in attacking him. Your unit commander may already know part of even all of this information. He still needs reconnaissance to fill in or verify any information he has so he can plan the attack more efficiently and effectively. The better job of reconnaissance you do, the fewer lives and less time will be lost in taking your unit’s objective.

After you have found the enemy you have to FIX ‘EM. You must keep him pinned down by your fire power so he can’t fire well-aimed shots at you. You FIX ‘EM by blasting him with all available weapons, then, while part of your unit advances against the enemy’s position, the rest of your unit keeps the enemy fixed by use of all available or necessary fire power.

If your job is to fire supporting fires instead of to fight the enemy directly, you may not even get to see the enemy. Most of the time he is too well hidden or too far away. You may be aiming at a puff of smoke, a building, a tree, or a hilltop. Your unit leader may sometimes tell you your target, as well as when and how fast you should fire. Even though you may not see the enemy, your supporting fire pins the enemy down and enables your team to advance.

Your support fires are to soften the enemy up so you may FIGHT ‘EM. While the enemy is fixed, your platoon crosses the line of departure, or “jumping off place,” and moves toward the assault position from which it will close with the enemy. When you are under fire or near the enemy, your unit moves in small groups, or by individuals, and tries as much as possible to keep all movements hidden from the enemy. You do this by taking advantage of hidden routes, ravines, clumps of trees, shaded places, and other aids to concealment, and by moving rapidly across open spaces. While moving up, you must be constantly on the alert against enemy resistance that must be wiped out as soon as possible to avoid delay in reaching your goal. Your unit’s fire power, if massed quickly enough, can often beat down groups of enemy attackers. If it doesn’t, you must use fire and maneuver – part of your unit fixes the enemy by fire power while the rest of your unit maneuvers toward the objective. If your leader wants supporting fire, he knows what weapons are supporting him, what their capabilities are, and how to get their fires on the target as soon as possible.

When you have moved in close to the objective, your leader has the supporting fire shifted so it will not endanger your own unit.

There is no use in taking your objective unless you put all enemy soldiers out of action, either by killing or capturing them, so that you will never have to fight these same enemy soldiers again. To FINISH ‘EM you use the shock action of an assault. This is the final blow to knock the enemy out and have him choose between surrender or destruction. To capture an objective, your riflemen use their own fire power to help keep the enemy fixed during the assault. Then you move on to your goal deployed as skirmishers delivering assault fire.

After the objective has been taken and the enemy put out of action, your unit prepares to defend the new position against enemy counterattack and your unit leader reorganizes his team so you will be ready to act immediately on any further orders which you may receive.