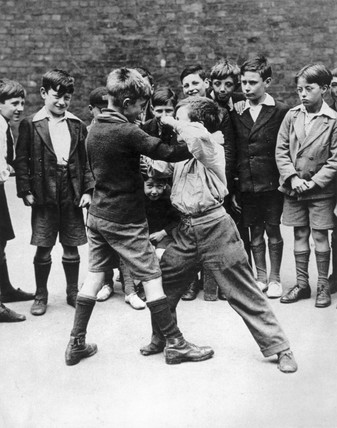 Editor’s Note: This week’s post on thumos brought to mind this Manvotional. Tom Brown’s School Days was a popular nineteenth-century novel that followed eleven-year-old Tom Brown, as he adjusted to life at a public boarding school for boys and learned how to become a young gentleman. The following excerpt introduces an account of Tom’s only big fight at the school. The headmaster had given him a student to look after, and when a large bully attacked the frail and sensitive boy, Tom stepped in to stop the beating and fight the bully himself.

Let those young persons whose stomachs are not strong, or who think a good set-to with the weapons which God has given to us all an uncivilized, unchristian, or ungentlemanly affair, just skip this chapter at once, for it won’t be to their taste.

It was not at all usual in those days for two schoolhouse boys to have a fight. Of course, there were exceptions, when some cross-grained, hard-headed fellow came up who would never be happy unless he was quarreling with his nearest neighbors, or when there was some class dispute between the fifth form and the fags, for instance, which required bloodletting; and a champion was picked out on each side tacitly, who settled the matter by a good, hearty mill. But for the most part the constant use of those surest keepers of the peace, the boxing-gloves, kept the schoolhouse boys from fighting one another. Two or three nights in every week the gloves were brought out, either in the hall or fifth-form room; and every boy who was ever likely to fight at all knew all his neighbors’ prowess perfectly well, and could tell to a nicety what chance he would have in a stand-up fight with any other boy in the house. But of course no such experience could be gotten as regarded boys in other houses; and as most of the other houses were more or less jealous of the schoolhouse, collisions were frequent.

After all, what would life be without fighting, I should like to know? From the cradle to the grave, fighting, rightly understood, is the business, the real, highest, honestest business of every son of man. Every one who is worth his salt has his enemies, who must be beaten, be they evil thoughts and habits in himself or spiritual wickedness in high places, or Russians, or Border-ruffians, or Bill, Tom, or Harry, who will not let him live his life in quiet till he has thrashed them.

It is no good for Quakers, or any other body of men, to uplift their voices against fighting. Human nature is too strong for them, and they don’t follow their own precepts. Every soul of them is doing his own piece of fighting, somehow and somewhere. The world might be a better world without fighting, for anything I know, but it wouldn’t be our world; and therefore I am dead against crying peace when there is no peace, and isn’t meant to be. I’m as sorry as any man to see folk fighting the wrong people and the wrong things, but I’d a deal sooner see them doing that, than that they should have no fight in them.