While a poorly cut on cigar isn’t likely to ruin your experience (though it’s better to make the cut well), a poorly lit stogie will generally leave you frustrated and without the relaxing smoke you were looking for.

The goal is to get the wrapper and the filler (the tightly rolled tobacco leaves inside the wrapper) evenly lit. That’s what leads to a smooth smoke and an even burn. To help you out with terminology, here’s a simple diagram of a cigar’s anatomy:

The cap is what you’ll cut off, and the foot is what you’ll be lighting. Let’s jump right into the proper tools to light up, and how to do so to get the best smoking experience.

While a Zippo looks nice and carries a certain air of nostalgia, keep it tucked away while lighting a cigar. Rather, use one of the two following options:

Butane lighter. Often called “cigar torches,” using a butane lighter ensures a clean, odorless burn. Butane evaporates almost instantly when lit, so you don’t get any of the off flavors that can result when using a lighter fluid, like is required for Zippos. Butane torches also provide far more heat and get the cigar lit much quicker and with less work. What’s nice about this type of lighter is that it’s refillable, and doesn’t need filling nearly as often as a Zippo.

Cigar matches. Generally close to 4” long and without the sulfur head of a standard match (which can cause off flavors), cigar matches are another good option for lighting your stogie. It takes a little more finesse and speediness, but is considered the most natural option since it’s just a small stick of wood.

Aficionados will sometimes claim you should only light cigars with matches, but I’ve tried both and don’t notice a difference; lighters are just easier. 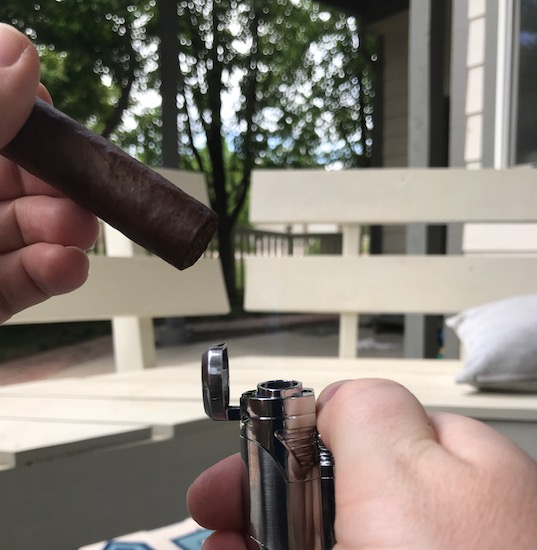 Toasting the foot. If you look very closely you can see the blue flame of the torch lighter.

Think of how you toast a marshmallow over a campfire. You keep it adjacent to, but not touching, the flame, and slowly turn it to get an even burn. Do the same thing with the foot of your cigar.

Light your torch or match and hold the cigar about an inch from the flame, turning it until the tip is blackened, maybe about 10 seconds. You do this to ignite the outer layers of the cigar; if you just held the flame up and started puffing right away, you’d only light the filler and you’d have an uneven burn. 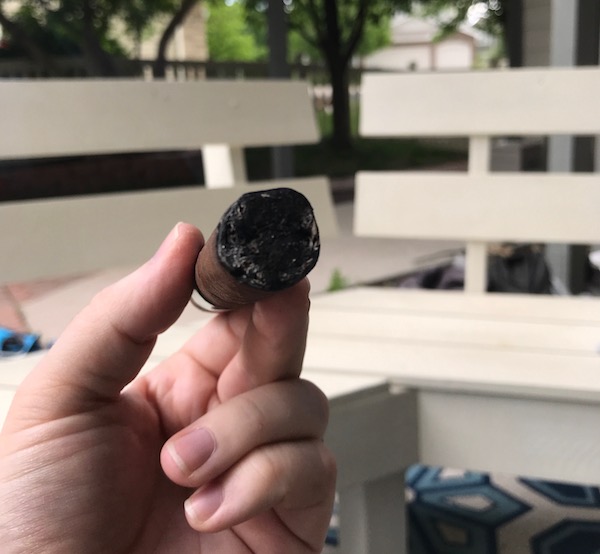 A toasted foot. Notice the gray, ashy edges. That’s what you’re going for.

2. Puff like you’re sucking a straw. With the foot properly toasted, you can now actually light the cigar. Hold the stogie closer to the lighter this time and take a few gentle draws just like you would suck liquid through a straw. The flame will flare up a little and you should get some smoke in your mouth — this is a good thing. Do that a few times, then feel free to look at the foot to ensure an even burn. There should be a consistent, gray ashy look to the whole thing. If one part is still cigar-brown, it means you have an uneven burn; try lighting again, focusing especially on that part of the cigar.

3. Don’t puff too much; re-light as needed. You won’t always get the perfect light. Sometimes the problem is actually with the cigar itself (if it’s not rolled just right or if it’s been stored at sub-optimal conditions), and sometimes you just don’t get it quite evenly lit. It happens. Don’t let it ruin your experience; just re-light as needed, as evenly as you can. 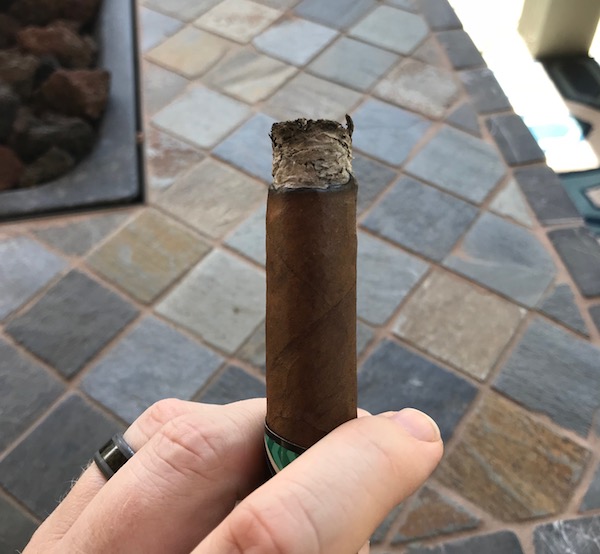 An evenly lit and burning cigar.

Also don’t take too many puffs, which can cause the cigar to get overheated. You don’t want to constantly be drawing. Give it a break and puff a few times every 30-60 seconds. If it’s overheated, the wrapper will burn black instead of the ashy gray it should be. At that point, you’ll want to let the cigar die out and re-light it, though in some cases there’s not much you can do, as it’s often dried out too much.