While most of the enjoyment of the cigar-smoking experience comes the quality of the stogie itself, cutting it poorly can result in a less-than-stellar smoke. Most people cut too much off their cigar, but with just a little bit of know-how, it’s quite easy to get it just right. That know-how begins with understanding the anatomy of your stogie.

Above, you’ll see a basic diagram of a cigar. What it doesn’t show is the inside, which is comprised of tightly rolled tobacco leaves. Around those leaves is one more leaf, the highest quality of the entire cigar, that acts as the wrapper. Unlike with a cigarette, which uses a paper wrapper, the entirety of a cigar — minus the band/label, which is just a brand signifier — is tobacco.

On a new cigar, one end — the “foot” — is already open. The other end — the “cap” — is enclosed by a small piece of tobacco leaf that’s separate from the main wrapper. As the cap end of the cigar will go in your mouth, it must be cut open before you can smoke it.

The goal in making this cut is to create a smooth opening without compromising the integrity of the cigar. You want to cut enough off for a smooth draw, but not so much that you cut into the main wrapper and risk it unraveling. You need to also cut quickly so that the break is clean and not frayed; you’ll always get some little flecks of wrapper in your mouth, but much fewer with a clean cut.

For tips on how to execute this kind of cut and get the most out of your cigar, read on.

This isn’t an exhaustive list of the types of cigar cutters out there, but if you’re using something other than these, you’re a real connoisseur, and won’t need this tutorial anyway.

Guillotine. By far the most common type of cigar cutter. It’s usually double-bladed, and unlike a real guillotine, attacks its victim from two sides rather than just one. No need to skimp — even the stainless steel variety only costs about $10 and will last years and years.

Punch. Looks sort of like a bullet and does just what it says: punches a hole in the end of the cigar rather than snipping some off. Advocates of the punch say it’s less destructive to the cigar and that it perhaps makes it a bit more full-bodied. These aren’t as common, but come in handy because they’re easily kept on a keychain and can’t accidentally chop a finger off.

Knife/Mouth. In dire straits, it’s easy to improvise cutting a cigar. If you have a pocket knife on you, which you should, use it to make a crude, but effective cut. Sans even that option, use your chompers to make an even more crude cut by biting off just the end. It’ll be a rough opening, of course, so feel free to smoke the stogie backwards — that is, from the end that wasn’t just cut (for that matter, you can always smoke it backwards if you’ve made a poor cut).

How to Make a Perfect Cut 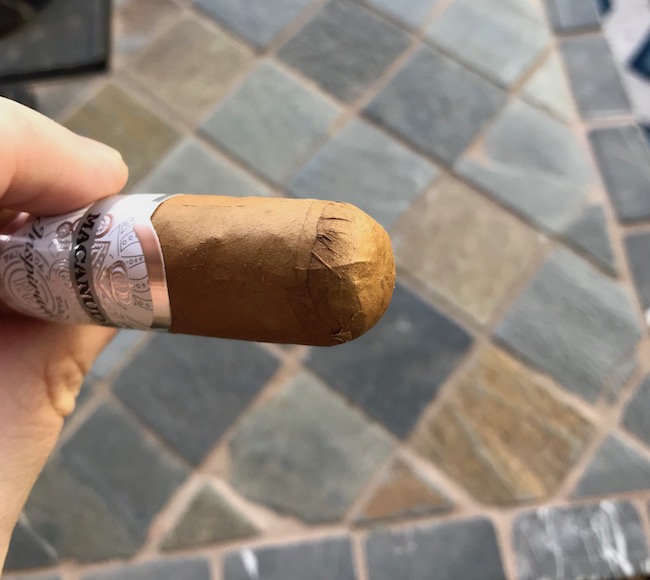 As mentioned above, the cap is just a small piece of tobacco that covers the end and keeps the whole thing together. It’s very easy to locate. This is all you want to cut — no more.

2. Position the blades right on the cigar, just inside the end of the cap. 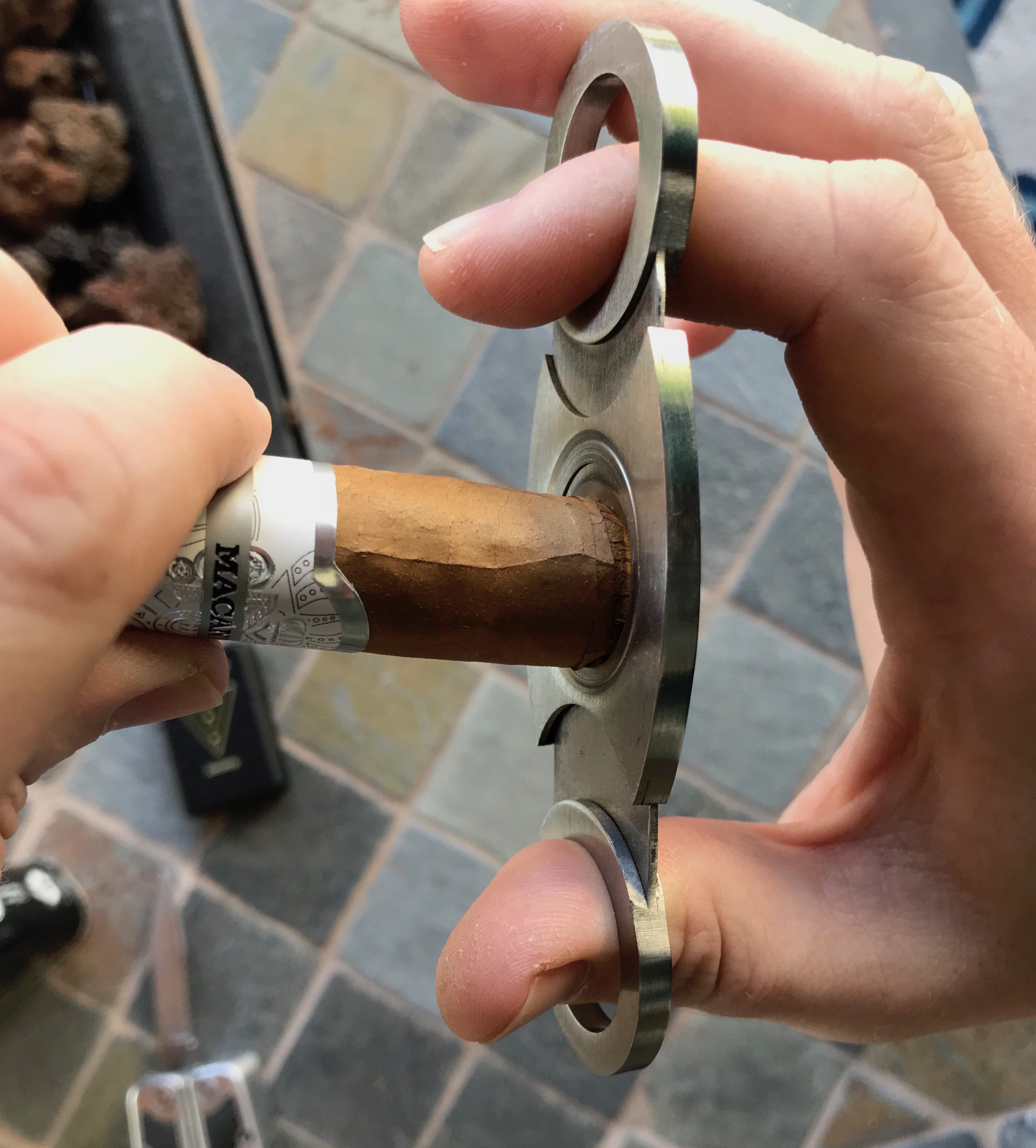 You want to position the blades a couple millimeters in from the end of the cap. 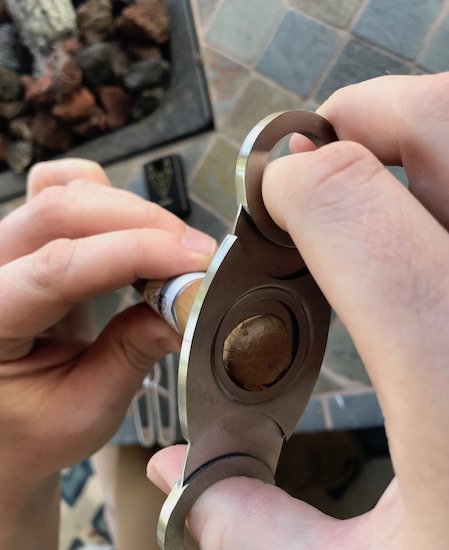 Another view. It’s really not very much that you’re cutting off.

3. Make a quick cut — no lollygagging. 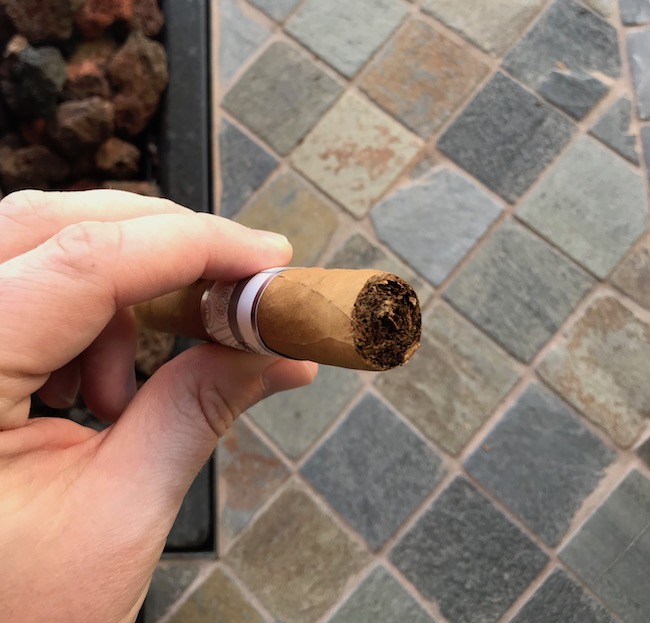 The first few cigars I cut, I was too tentative, and ended up with flayed cuts. For a clean, smooth smoking experience, “rip off the bandaid” and cut the cigar firmly and quickly. It may not be perfectly straight — that’s just how it goes — but it’ll most likely at least be clean and leave fewer little tobacco flecks to end up in your mouth. 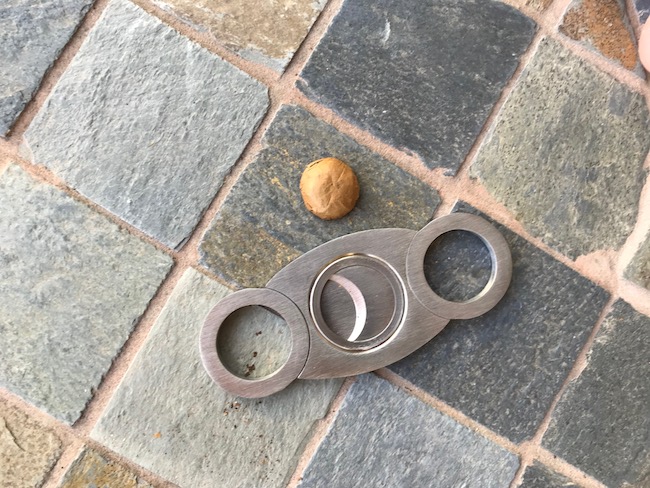 This cut ended up just about perfect and the cap cleanly came off.

4. Smoke and enjoy! For more tips on that, see our illustrated guide to smoking a cigar.