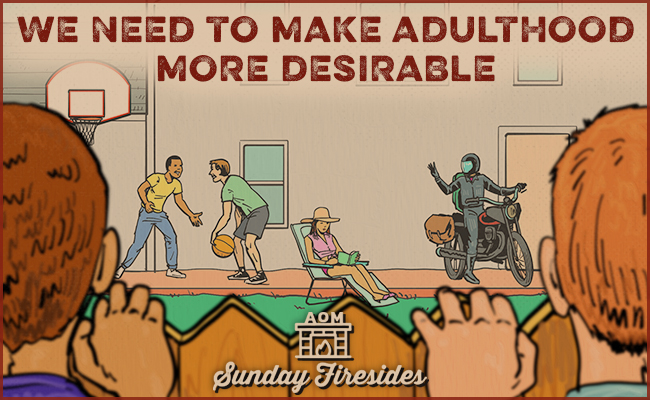 Sometimes people criticize the youth of today for their failure to launch into adulthood. They think those stuck in prolonged adolescence are lazy, soft, and unambitious.

Other people lay the blame at the feet of the mothers and fathers of these young adults. They say that parents coddle their kids, indefinitely extending their childhood.

These critiques (along with many other cultural and economic forces) may partly explain the phenomenon of arrested development. But there’s another, deeper factor which underlies and drives them both: an insufficient pull and too-conflicted push.

For many, adulthood means trading a life entirely devoted to learning for one in which you only read (maybe) two books a year. It means swapping a full schedule of sports, clubs, and music lessons for having exactly zero hobbies (unless watching Netflix counts). It means going from hanging out with peers for the bulk of each day to (maybe) seeing friends a few hours a month. It means shifting from experiencing plenty of firsts to being stuck in a hamster wheel of thousandths.

From the outside looking in, young people see the life which is lived by most adults, and understandably aren’t sure they want the same. And the grown-ups living those lives aren’t sure they want them either: They’re not unhappy, but they’re not happy either, and this ambivalence subconsciously lends a mixed message to their parenting; while one part of themselves nudges their kids towards maturity, another says, “Don’t be in a hurry to grow up — it doesn’t get better on this side of the fence!”

Adulthood means taking on more responsibilities, and in turn, receiving more privileges. Unless we do something worthwhile — fun, interesting, desirable — with those privileges, young people won’t want to apply to the society of grown-ups, and adults won’t be able to wholeheartedly encourage them to join its ranks.