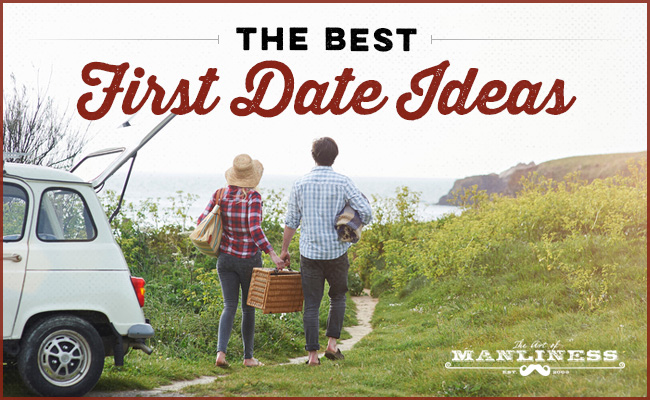 There are essentially two categories of first dates.

There are first dates with people you’ve never seen in the flesh, nor probably talked to on the phone — those you met through an online dating service. The best first date for this scenario is the coffee date, which is something of a cliché, but for good reason: accordion-like in nature, you can cut things short after a 20-minute chat if the person’s looks or personality don’t match what you expected from their profile, or, if things go well, you can extend the date, and ask her if she’d like to accompany you on a second activity — perhaps checking out a local street fair or farmer’s market.

Then there are first dates with someone you’ve already met in person and chatted with a bit. Maybe a classmate, or a barista at a coffee shop you frequent, or a gal you talk with in passing at church. It could even be a long-time friend, who’s previously been nothing more than that. You know them a little (or a lot), but you’ve never gone on an actual date (defined by the 3 P’s: Planned ahead, Paired off, Paid for) with them. In this situation, in which you feel more confident in your chances with the person, and are eager to spend more time with them in a new context, you can opt for a first date that involves a little more commitment.

It’s that category of first dates that the list below is focused on.

A dynamite date in this category includes 5 elements:

There are plenty of lists out there that will give you 30 or 50 “best” first dates — but these actually consist largely of ideas that would make for awesome second, third, or fourth dates. Using the criteria above for the very best first date, you can narrow things down significantly. The 8 date ideas below are those which will set up the best possible chances for having a good, spark-catalyzing time.

You’ll never run out of interesting things to say as you tour through a museum’s exhibits, and the backdrop can elevate your conversation above the usual first date banalities. Plus, a nice art museum just feels dang classy.

Playing putt-putt has an almost cliché, overly wholesome feel to it, but that can actually work in your favor — it shows you don’t take things too seriously, which is an attractive trait. You’ll have plenty of laughs over the course of 18 holes, and afterwards you can move on and treat her to — what else? — a couple of ice cream cones.

Drinks and trivia are both good inhibition looseners, and you’ll likely be in for a night of laughs and fun. Plus, the element of competition adds a bit of emotional charge.

There are places that offer pre-made ceramic pieces that you simply select and paint. It’s surprisingly fun and soothing to do something creative together, and this is a good date if she’s more of a mellow, introverted type.

“Paint and Sip” places are a related idea, and certainly a fine option, but it’s easier to sit face-to-face and converse at a pottery painting place.

Going to a professional sports game violates the “affordable” tenet of best first dates, but attending a minor league game is right on target. Spectating is admittedly a little side-by-side in nature, but minor league games are usually so casual and laid-back that it’s really easy to turn to each other a lot to converse.

Picnics have a lot going for them as far as building attraction. First, you demonstrate your skill and ingenuity in assembling the food you’ll bring (we’ve got tips for the perfect spread here) as well as in the spot you choose to set up camp (showing you know an impressive location, especially one with a perfect view of the sunset, will score you big points — women like a man who’s got a scout-like knowledge of terrain); don’t go anywhere too secluded though, as that won’t make a lady who doesn’t know you very well yet comfortable. Second, nature is an incomparable backdrop for a date, as it’s been shown to elicit all kinds of positive feelings.

What’s great about the standard coffee date is that it packs plenty of face-to-face time around the imbibing of hot beverages — which, believe it or not, has actually been shown to induce warm inter-personal feelings. To retain those two elements, but in a form that’s less causal and abbreviated, try going to a tea house. Not one of those foo-fooey ones, with doilies and crumpets and overstuffed velvet chairs frequented by ladies in big hats, but a classy, “gender-neutral” kind of place where you can taste gourmet teas in a zen-like atmosphere and snack on tasty victuals.

Plus, if the second Karate Kid film taught me anything, it’s that tea ceremonies are a prelude to a first kiss.

Nothing will quite get the butterflies fluttering like the laughs and thrills offered by an amusement park. From the darkened tunnels of the spook house, to the suspenseful climb up the rollercoaster hill, there will be plenty of hand-holding moments to go around. Plus, a chance to show-off your he-man strength and win your gal a giant stuffed animal.