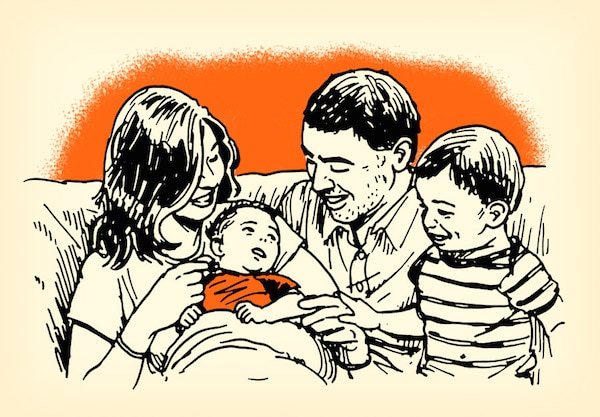 Having your first kid is a huge adjustment. A baby bomb drops from the sky, or at least a gurney, and explodes your old routines and way of being in the world. It can be a stressful experience (less so if you follow these tips), as you pretty much have no idea what you’re doing. You’re figuring out everything for the first time, learning by trial and error, and worried you’re not doing stuff right.

In comparison, having your second kid is a cakewalk. You feel like an old veteran. You’ve been down this road before and pretty much know what to expect and how to proceed. You’re usually a lot more relaxed.

Yes, the arrival of your second kid is usually a pretty straightforward affair. But there are two new things this time around to be aware of, and today we’ll offer some advice on how to address them and smooth the transition to becoming a family of four.

Tip #1:  Give Your Firstborn Dedicated Attention and Support

Having your second kid is just like having your first, except for one important wild card: rather than bringing your baby home to an empty house, you’ll be returning to territory that’s already been marked and occupied by child #1.

Parenting books will give you advice on getting your firstborn ready for their sibling’s arrival — taking them to one of your wife’s prenatal appointments, reading them books about what it means to be a big brother/sister, letting them “help” decorate the baby’s new room, etc. But I honestly think these kinds of things serve to comfort the parents more than the kid. Little tykes really can’t conceptualize what having a baby bro/sis is actually going to mean for them; it’s like someone asking you to imagine a color you’ve never seen.

No, all you can really do for your firstborn is to be there for them during the adjustment period after the baby comes home.

It’s impossible to say how your firstborn is going to react to having a sibling — it all depends on their age and personality. Flexible, roll-with-the-punches kids and older children tend to have an easier time. Kids who are sensitive and like having a strict routine, will likely have a harder adjustment. Even within a single kid, their reaction may swing from interest, happiness, and affection, to anger, sadness, and hostility all in the course of a day (or hour!).

However they react, just be patient, supportive, and sympathetic. You’ve just got to keep in mind that it really is a huge adjustment to go from being the center of your parents’ universe, to having to share their time and attention with another creature. Feelings of jealousy and rivalry are natural. It’s like if your wife brought another husband into the family, and you were expected to immediately jump on the polyandry train. A baby adds a new addition to the family, but there’s genuine loss there too, which you may even feel a twinge of yourself — it’s the end of the 3 amigos.

When Scout was born, Gus, who was almost three, acted pretty much fine for about a week. Then, I guess when he realized that this new addition was permanent, he commenced acting out and having nuclear meltdowns. When I’d hug him, he’d sob and heave on my shoulder with a heartbreak that was truly palpable; it genuinely broke my heart as a dad. We didn’t let him get away with it when he broke the rules (he still had to go to timeout), but we were as patient with his outbursts as possible. And when he cried, I tried to reassure him that the new baby wasn’t taking his place, and that I loved him just the same as before. When it seemed like he wished he was getting babied too, I’d remind him of all the advantages of being older, like say, not having to crap in your pants.

Both parents should try to have some dedicated, one-on-one time with your oldest each day, but since mom tends to be the most preoccupied, this is something you can really focus on as a dad. As mom has less time for your firstborn, you can step into the gap and give him or her more attention.

Gus and I already spent a lot of time together, but I made an even greater effort to hang out with him. Maintaining the firstborn’s routine as much as possible is important and we kept up with our Saturday morning ritual of going out to breakfast together, and I also made a concerted effort to bring him along on errands or take him out somewhere to play.

Not only does plenty of dad attention reassure your firstborn that he or she hasn’t been forgotten, but it can get them out of the house and away from a caterwauling newborn. So spend that alone time with your oldest, and if you haven’t already done so, establish some one-on-one rituals that will make him feel special.

No matter how hard your firstborn initially takes gaining a sibling, the new family relationship and dynamic will eventually settle in. Gus and Scout now refer to themselves as best friends and get along great.

Tip #2: Don’t Expect the Second Kid to Be Anything Like the First

You may think, maybe even hope, that your first and second children will be similar in temperament and personality. And not having any other experience, you’ll also very likely think that the way your firstborn developed and hit milestones is the way babies develop. Anything that went well with your first, you’ll attribute to your great parenting skills, and imagine being easily reproducible.

But you are very, very likely in for a surprise.

According to pediatrician Dr. Perri Klass, “the hardest thing to teach, especially to people who haven’t yet done any child-rearing, is how different…healthy, normal babies can be, right from the beginning”:

“Every child is a different assignment — and we can all pay lip service to that cheerfully enough. But the hard thing to believe is how different the assignments can be. Within the range of developmentally normal children, some parents have a much, much harder job than others: more drudge work, less gratification, more public shaming. It sometimes feels like the great undiscussed secret of pediatrics — and of parenting. Babies and children are different, assignments are different, and we spend a lot of time patting ourselves on the back — as parents and as pediatricians — when the easy babies and toddlers behave like themselves, and a lot of time agonizing and assigning blame when the more difficult kids run true to form…

As a pediatrician, I feel this in the exam room all the time — respect for parents who are coping good-naturedly with the cranky and the colicky. Sympathy for parents who break down when they describe public tantrums and the judgments passed by onlookers who assume that a crying baby must automatically reflect either a too-indulgent or a too-neglectful parent — or both at once…

So much of your kids’ personalities comes hardwired right out the gate that you’ll wonder if Plato wasn’t on to something with his idea of there being a preexistence! A failure to recognize these inherent differences, and approaching your second child with set rather than open expectations can cause you a lot of grief. If your first kid was really easy, you’ll attribute this to your parenting skillz and expect your second kid to be likewise; if he’s not, you’ll become monumentally frustrated. If your first kid was hard, you might end up being too tough on yourself for a temperament you can’t control. Either way, you may try parenting strategies that worked for your first kid on the second, continually attempting to fit a square peg in a round hole, and experiencing vexation rather than success.

Here’s how having erroneous expectations for our second kid played out for us.

Gus started sleeping through the night at about 8 weeks, and was a tremendously good sleeper from pretty much there on out. Kate and I hadn’t really done anything to encourage that, but still figured we must have had something to do with it — that maybe it was because we were so calm and laidback, and he had absorbed these calm vibes, which helped him relax into a nice, normal sleep cycle. We couldn’t understand all the fuss and debate about sleep training, and figured those parents must be overly stressing or something.

Well, as it turns out, we would soon come to understand it all very well — for somehow our calm vibes failed to have the same effect on Gus’ sister! Scout developed acid reflux, and didn’t sleep through the night ‘til she was almost 2. We even did a consultation with a baby sleep coach to try to crack the code. Boy, it was a frustrating two years, and I think it was even more frustrating because we had expected her to sleep just like Gus.

Gus’ and Scout’s personalities were (and are!) absolute polar opposites too. Gus was a very serious, intense kid who was generally compliant when it came to good behavior, and started spelling with blocks at 17 months, reading at 2, and could count to 800 before he was 3. Scout, who’s almost 3 now, is joyful, fun-loving, affectionate, fiercely stubborn, and has yet to read a word.

We’ve come to realize that Gus is never gong to be Scout, and Scout is never going to be Gus; they’re both unique individuals. We don’t expect Gus to be ebullient, nor expect Scout to be working on her arithmetic. We don’t take credit for Gus’ precocious cognitive skills, nor blame ourselves for Scout’s stubbornness and occasional public outbursts.

That doesn’t mean we’ve absolved ourselves of responsibility in raising them. Rather, we see them as seeds with a potential we didn’t program ourselves. A lot of what they’re going to grow into we can’t control, but we can do our best to shape and nurture their potential — watering and fertilizing the seed, building a fence to keep out herbivores, and trimming back weeds.

While we use the same parenting best practices with both children, we’ve had to learn that different kids sometimes need different approaches. You can’t automatically apply the exact strategy that worked so well for one kid to their sibling. You set certain rules and standards for behavior, and then you adjust them to each child’s idiosyncrasies, loving them for who they are and what they’ll become.