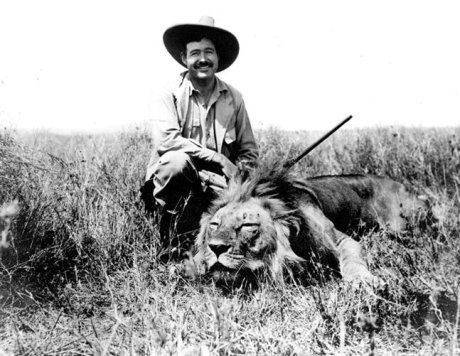 Editor’s note: This post is from Chris Hutcheson, a former guest writer, and now official Art of Manliness contributor. His friend, Josh Parchman, helped research this article. Thanks Josh.


Welcome Hutch! The site is even manlier with you on board.


“Nowhere on earth (and possibly space either) can the senses as well as the emotions wallow in a combination of stimulate such as are found in the African bush: The whine of flies, the moan of a sway-bellied lion leaving his kill in the carmine dawn, the hacksaw rasp of a leopard in the gloom, the bowel-freezing scream of a bull elephant catching your wind. The musk of sweat-lacquered black skins blending with the smoke of the dying mopane fires; the wild, sweet decay of buffalo dung; the odd, heady cloy of cordite and the conglomerate of red, sun-raped dust mixed with the powdery fragments of crushed, dry, golden grass. The buzzing oozing, crawling rot of meat and the whorish impact of jasmine. ”

When looking back on the adventures of the men of times gone by, no great adventure stands out more prominently than the hunting safari. The imagination quickly jumps to images of bouncing across the savannah in an open top Land Rover, scattering a herd of grazing zebra while searching out the tracks of the lion that killed less than a mile from your camp last night. Or perhaps of pushing through grass that grows four feet taller than most men, so close to the rhino you are stalking that you can literally smell him, but not even knowing which direction you should be pointing your double barreled rifle. Stories of adventures like these filled the imaginations of boys and the dreams of men for generations.

Although the modern safari (by gun or camera) is financially out of reach for most of us, the stories of the golden age of the safari are readily available in the form of fiction and non-fiction alike. Authors such as Ernest Hemingway, Peter Hathaway Capstick, Robert Ruark, and even the father of manliness himself, Theodore Roosevelt, have written volumes on the topic. From within the pages of these masterpieces of masculine literature sprout stories of man-eating lions, elephants chasing fleeing Land Rovers, hippos attacking river cruises, and so much more. Through these books we are offered a glimpse of the lives of these men and the adventures they experienced in a world that most of us will never see, a world of open savannah as far as the eye can see, or jungle so thick one cannot see what dangers await ten feet in front of him. Consider the words of Peter Capstick, one of the foremost 20th century authors on the subject:

“On safari, there is exhilaration. And fear. There’s the joy of having done a stalk properly. There’s also the terror of having done it badly or of having shot poorly, bringing the blur of hurtling lion or the avalanche of elephant down on your neck in an instant, tourist board or no. There will be the swelter of heat, the probing fingers of cold, the pleasure of exhaustion and the dry, cicada-filled hours of boredom when it’s too hot to hunt and you can baste the early afternoon away in your own juices. There will be small quarrels and triumphs, frustrations and elation. And (I rather prefer “but), if nothing else, there will be adventure.”

Safari literature and the safari itself rose to prominence in Europe and the United States chiefly following Theodore Roosevelt’s 1909 expedition through much of East and Central Africa. During this expedition Roosevelt bagged over 500 big game animals, the large number of which he justified in the name of science by donating the hides to the Smithsonian Institute and partner museums, who were all but obliged to accept. As most would consider the life of Theodore Roosevelt to be a pinnacle of manliness, it is worth noting what he said in regards to the hunt:

“In hunting, the finding and killing of game is after all but a part of the whole. The free, self-reliant, adventurous life, with its rugged and stalwart democracy, the wild surroundings, the grand beauty of the scenery, the chance to study the ways and habits of the woodland creatures-all these unite to give to the career of the wilderness hunter its peculiar charm. The chase is among the best of all national pastimes; it cultivates that vigorous manliness for the lack of which in a nation, as in an individual, the possession of no other qualities can possibly atone.”

We too can join in on the thrill of the chase that Roosevelt so passionately described by joining these courageous men of long ago on their adventures as chronicled in the pages of safari literature. The simple yet descriptive language of many of the great safari writers such as Rourke and Capstick often imitates the style of Hemingway, where the fewest amount of words evoke the strongest emotions. When reading the description of the tracking of a man-eater who is in all likelihood tracking you, or of the tense moments before the shot is taken on a large cape buffalo who is capable of forwarding you on to your maker with a single charge, it is easy to sink so deep into the story that it is as if you are actually there. Capstick’s description of stalking a bull elephant is a fitting example:

“As he gets closer, it will dawn on you that there is simply no place you can go to avoid his six tons of murder. He can easily outrun the fastest sprinter with his deceptive shuffle, and if you’re thinking of climbing a tree, don’t bother. He’ll either knock you out of it personally or toot up a couple of chums to share in the festivities. If 12,000 pounds of screaming, screeching, infuriated elephant bearing down on you has somehow rattled your nerves to the point that you miss the six-by-four inch spot on his forehead…then you may as well forget it. The most talented mortuary cosmetician in the world couldn’t rewire you so your own mother would know if you were face up or down.”

Below is compiled what may be considered a “starter pack” for those interested in this most thrilling of literary genres. Encompassing a couple hundred years of history, these books detail exploration of the last wild places, thrilling hunts, tribal warfare and the expenditure of copious amounts of gunpowder by day and scotch by night.

Death in the Long Grass

Death in the Silent Places

Death in the Dark Continent

Peter Capstick’s Africa: A Return to the Long Grass

These books are just a few examples of the works of Peter Hathaway Capstick, considered by many to be the greatest writer of the genre. His uncanny ability to break the reader out in a cold sweat while describing the stalking of a man-eater is not to be missed. His first work, Death in the Long Grass, should be first on the list of someone interested in exploring the genre, as it is unsurpassed both in its conveying of the thrill of the hunt and in its humor. Capstick serves as an example to those who are bored in their humdrum lives; a successful Wall Street stock broker in his twenties, he walked away from his career to take up professional hunting, and he never looked back. 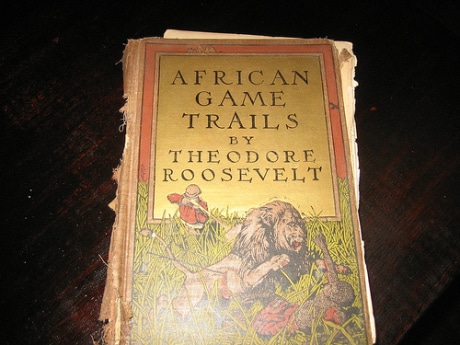 What can be said about Teddy Roosevelt that readers of this site would not already know? The epitome of manliness, Roosevelt chronicles his first African safari, embarked on just days after leaving his post in the oval office. Peter Capstick says this of African Game Trails:

“African Game Trails has been a standard item in every library of hunting Africana since it first appeared in print. It represents the success, from the American viewpoint, of someone who sowed a dream in the American psyche to go to Africa and experience the hunt and to bring back qualities that would enhance the hard-care manliness, love of the outdoors, and the strength of person and nation that became America.” 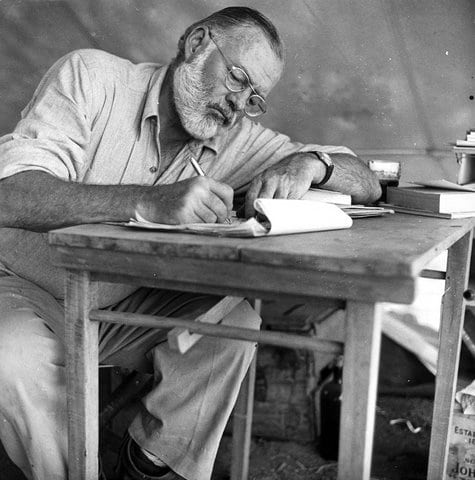 Books: The Green Hills of Africa

Papa Hemingway was a master with the written word, producing classics such as For Whom the Bell Tolls and The Old Man and the Sea. He was also an acclaimed big game hunter and spent much time in East Africa where he rid the area of problem animals at government request and also did his fair share of trophy hunting. In The Green Hills of Africa and Under Kilimanjaro Hemingway weaves the tale of his life in Africa, including surviving two separate plane crashes in the latter. True at First Light is considered both autobiographical and fiction, in that it is assumed that Hemingway mixes memory with imagination along the way. The Short Happy Life of Francis Macomber is one of the finest short stories ever produced and follows a man and his wife on guided safari, detailing the man’s struggle with cowardice and his breakthrough, revealing his true courage.

Books: Horn of the Hunter

Labeled as “the poor man’s Hemingway,” Rourke’s style is similar to Papa’s, and is all the better for it. Horn of the Hunter details his first safari in the early 1950’s. Use Enough Gun is a compilation of Rourke’s safari stories, including some found in Horn of the Hunter. 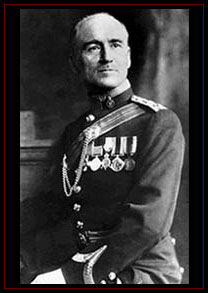 Book: The Man Eaters of Tsavo and Other East African Adventures

Another classic of the genre, this is the 1907 account by Lieutenant Colonel John Henry Patterson, who was dispatched to Kenya by the British East Africa Company to build a railway bridge over the Tsavo River. During construction, workers were regularly killed by a pair of man-eating lions later known as the Man Eaters of Tsavo, or as the locals called them, the Ghost and the Darkness. Patterson set out to rid the workers of this threat, and the story is thrilling. He kills one unsuspecting man-eater with reasonable ease, but this is only the beginning. Before the end, the man-eaters seem almost supernatural in their ability to survive all of Patterson’s best laid plans. Indeed, one of the man-eaters escaped unscathed from being trapped behind steel bars and fired on by trained soldiers at point blank range. Patterson recalls this when he writes:

“Altogether they fired over a score of shots, and in the end succeeded only in blowing away one of the bars of the door, thus allowing our prize to make good his escape. How they failed to kill him several times over is, and always will be, a complete mystery to me, as they could have put the muzzles of their rifles absolutely touching his body.”

Before it was all said and done, the Man Eaters of Tsavo killed over 140 workers and injured many more, as well as essentially halting the power of the British Empire by completely stopping construction of the railway line. The film The Ghost and the Darkness starring Val Kilmer is loosely based on this account.

Books: The Man-Eaters of Kumaon

The Man-eating Leopard of Rudraprayag

Jim Corbett is another legend of the genre, though he never wrote of hunting in Africa. Corbett’s adventures all took place in India, where he was employed by the government to hunt man-eating tigers and leopards. His first book, The Man-Eaters of Kumaon, is a classic that describes his hunting of several of the most deadly man-eaters in history, including one tiger responsible for over 400 deaths. The Man-Eating Leopard of Rudraprayag details his pursuit of a leopard who was responsible for over 125 deaths.