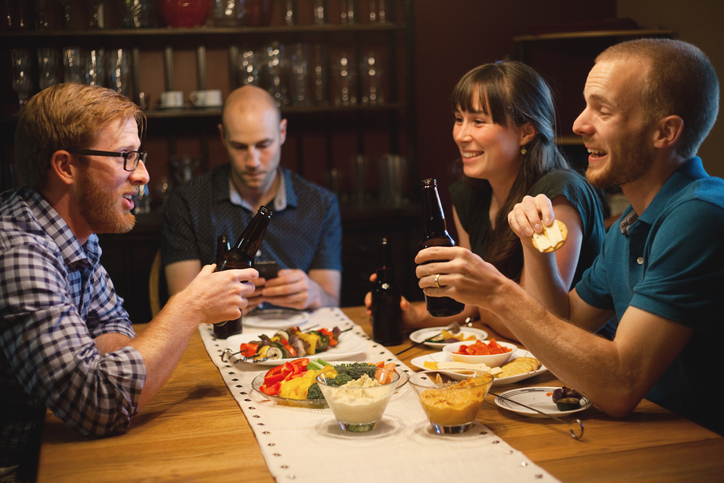 We all have that friend or relative who tells the same stories over and over. As soon as he or she gets underway with the well-worn setup, you can see spouses exchange a “here we go again” glance, and people intentionally try to put on a face they hope disguises their disinterest and carries the appearance of listening to something for the first time.

We want to be patient with people. Some folks retell stories because their memory isn’t very good, or because the deck of life experiences they draw from to make conversation isn’t very deep. At the same time, however, listening to the same stories over and over can make gatherings and get-togethers rather dull.

So what should you do in this situation?

Since it’s not the greatest hardship to listen to a story for the tenth time, and it seems like it would be rude to tell the speaker you’ve heard it before, most folks just grin and bear it.

That’s a fine course of action, especially if you’re interacting with an older person, whose mind isn’t what it used to be and who could use some grace and perennially attentive listening.

But it’s arguably not the best way to handle things in many cases, either for yourself as the listener, or for the speaker.

Even though we think that letting people tell the same stories without correction is the “nice” thing to do, in some ways, it’s actually not so polite.

Though listeners try their best to pretend it’s the first time they’ve heard what is in fact a familiar story, most people aren’t very good actors (some people start to look down at their phones because they know they’re not); it’s particularly hard to fake genuine, surprise-driven laughter. As a result, something invariably seems off to the speaker about the reaction of his “audience”; he can sense that his listeners don’t seem as interested or amused by the story as he thought they’d be. The speaker may thus feel confused and hurt, and wonder if he said something wrong, or is just a boring person.

At the same time, most people would want to know if they were telling a story they’d already shared before, which is something nearly everyone does on occasion, including yourself! It’s a little mortifying to think that there have assuredly been times when people were faking their reactions to your own repeated anecdotes. You probably would have preferred that someone stopped you.

You just wouldn’t want them to do it in a rude way.

Fortunately, there’s an approach to stopping a repeated story which minimizes the sting of “rejection.”

Interrupting someone when they begin an anecdote you’ve already heard with “You’ve told this story before!” will tend to make the speaker feel chastised and embarrassed.

Instead, frame your interjection in a softer form — a question which shows you’re already familiar with the story: “Was this the time when you lost your hat?” “Was this the trip where you ran into Arnold Schwarzenegger?” The speaker will likely then say something like, “Oh, you’ve heard this story before!” By getting them to say it, instead of you, the realization won’t make them feel as awkward.

Sometimes, even if you have heard someone’s story before, you realize you’ve forgotten some of the details, and would like to hear it again, in which case you may say, “I have heard this story, but I forget how it turns out. Tell us again.” A story that might have seemed tedious if the speaker had “forced” it on you, will then seem more interesting, since you asked for it. Both speaker and listener will enjoy a greater sense of rapport.

If someone is a perennial story-reteller, it can help to bring up their previously-told stories yourself at other times. “Well at least you didn’t lose your hat this go round.” “Would you say the experience was even better than meeting Arnold?” Hearing external affirmation of their stories will solidify in their memory the fact that they’ve already shared them with you. (Re-surfacing things people have previously told you is just a generally good practice; everyone likes to know that you truly listen and retain what they tell you!)

When you’re the speaker, if you feel any tinge of uncertainty as to whether or not you’ve shared a certain story before, it never hurts to ask before you begin: “Did I ever tell you about the time I got into a fist fight with the postman?”

So too, which stories you’ve shared with which sets of friends/relatives can get understandably confusing, so it can help to make a mental note after a social gathering like, “Okay, I’ve shared my story about the ferocious koala bear with the Smith’s.”

Everyone re-tells stories from time to time, and if as a listener you like repeated tales, by all means enjoy them on each and every go round. But if you feel like it might be best for all involved to stop a narrative train before it leaves the station, know that there’s a way to offer some polite redirection.