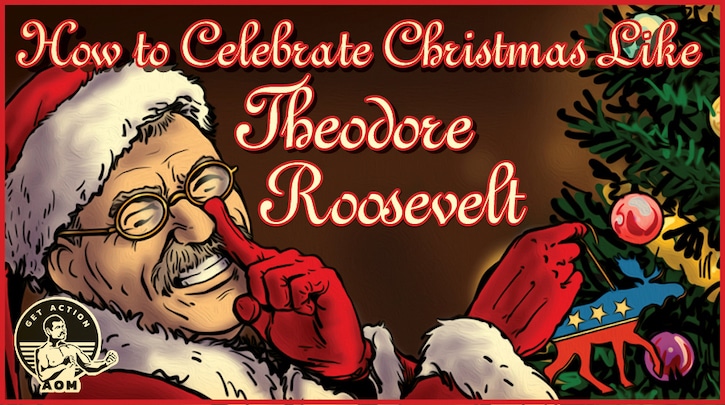 Teddy Roosevelt, the patron saint of the Art of Manliness, had an exuberant love of life.

A friend of T.R.’s described his joie de vivre as the “unpacking of endless Christmas stockings.”

If Teddy Roosevelt approached all of life as if he were unpacking Christmas stockings, what was he like when it was actually Christmas?

According to the man himself, he derived “literally delirious joy” from the holiday.

Below we unpack how T.R. approached Christmastime with strenuous festivity and how you too can enjoy the warmth and cheer of the season just like the Bull Moose himself.

Connect With Your Inner Child

It’s been said that Teddy Roosevelt never entirely grew up; there was still a bit of boy in him even when he was in the prime of manhood. He wasn’t childish but retained a childlike capacity for boundless enthusiasm. That connection to the boyish part of himself is one of the reasons he had so much zest for life and why Christmas was always magical in the Roosevelt home.

In his autobiography, Teddy describes Christmases when he was a boy and how he tried his best to recreate the same magic when he became a father himself:

In the evening, we hung up our stockings — or rather the biggest stockings we could borrow from the grown-ups — and before dawn we trooped in to open them while sitting on father’s and mother’s bed; and the bigger presents were arranged, those for each child on its own table, in the drawing-room, the doors to which were thrown open after breakfast. I never knew any one else have what seemed to me such attractive Christmases, and in the next generation I tried to reproduce them exactly for my own children.

So the first step to celebrating Christmas like T.R. is reconnecting with your childhood sense of wonder and fun. Think about your favorite holiday memories growing up. What traditions do you remember enjoying the most? Is there a way to recreate them, in perhaps new form, now that you’re an adult?

Put Up a Christmas Tree

There’s a famous story that Theodore Roosevelt banned Christmas trees from the White House because of his commitment to conservation. In 1902, the story goes, his 8-year-old son Archie snuck a contraband Christmas tree into a closet and decorated it with the help of a White House carpenter. On Christmas morning, he surprised his father with the Christmas tree, and, just like the Grinch who has a change of heart, Teddy Roosevelt lifted his ban on tannenbaums.

There’s only one problem with this story: it’s largely humbug.

Roosevelt was never anti-Christmas tree. The Roosevelts put a tree up in their Oyster Bay home, and T.R. gave a tree to the local school there each year.

It is true that the family didn’t put a tree up in the White House the first Christmas they spent there in 1901. But it wasn’t because Teddy was against the idea. The practice of putting up a tree hadn’t taken such hold in the country that it was considered a sacrosanct tradition (it wasn’t until the 1920s that Christmas trees became a regular fixture in Americans’ homes), and it seems the Roosevelts just decided not to have a tree that year.

It’s also true that Archie snuck a Christmas tree into the White House in 1902. On Christmas Day, he threw open the closet door it was hidden behind to the surprise and delight of his family. Upon the tree, he’d placed a gift for each of his parents and siblings, as well as the Roosevelts’ pets, “Jack the dog, Tom Quartz the kitten, and Algonquin the pony, whom,” T.R. said, “Archie would no more think of neglecting than I would neglect his brothers and sisters.”

So if you want to celebrate Christmas like T.R., don’t hesitate to put up a tree (a real one — always a real one!) and enjoy the evergreen smell and twinkling lights of one of the very best parts of the season.

While he was growing up, Roosevelt’s father would donate money and volunteer his time to provide Christmas dinner at the local newsboys’ lodging house. As a young man, Roosevelt followed in his father’s footsteps by doing the same.

As an adult, Teddy continued the tradition of doing good at Christmas by handing out presents to children at the local school in Oyster Bay. First, he would give a speech. Roosevelt said his speeches “[were] always mercifully short, my own children having impressed upon me with frank sincerity the attitude of other children to addresses of this kind on such occasions.” He’d then pass out presents to the kids, slap folks on the back, and say, “Bully Christmas!”

Some historians suggest that Roosevelt would dress up like Santa while passing out the gifts. This has never been confirmed, but I’d like to imagine T.R. dressed up like Old Saint Nick.

Go Big on the Presents for the Kids

When Roosevelt was a boy, his parents gave him more practical presents for Christmas. But he liked to get his own kids a spread of gifts that were designed for their imaginative play and sheer delight. He loved watching the looks on their faces when they caught sight of their holiday haul.

In a letter, Roosevelt described the excitement of Christmas mornings in his home:

At seven all the children came in to open the big, bulgy stockings in our bed; Kermit’s terrier, Allan, a most friendly little dog, adding to the children’s delight by occupying the middle of the bed. From Alice to Quentin, each child was absorbed in his or her stocking, and Edith certainly managed to get the most wonderful stocking toys. Bob was in looking on, and Aunt Emily, of course. Then, after breakfast, we all formed up and went into the library, where bigger toys were on separate tables for the children.

I wonder whether there ever can come in life a thrill of greater exaltation and rapture than that which comes to one between the ages of say six and fourteen, when the library door is thrown open and you walk in to see all the gifts, like a materialized fairy land, arrayed on your special table?

Roosevelt was, of course, well-off and could afford to get his kids a nice array of presents, and one shouldn’t go into debt to make Christmas morning a big extravaganza. But within reason, and within one’s budget, it can be enjoyable to lay out an impressive assortment of goodies. After all, Christmas comes but once a year! (And your kids will be out of the house before you know it. Have you seen this chart? Boy, that chart). You don’t need to give your kids cool gifts to spend quality time with them, naturally. But it does make for a memorable bit of annual fun.

A historical side note here: According to the book Christmas Past, it wasn’t until the 1950s and 60s that wrapping Christmas presents became a thing. Most families just put the toys unwrapped in stockings or on a table like the Roosevelts. Growing up, my siblings and I each had our own couch where Santa placed our presents unwrapped, Rooseveltian style. Kate grew up with Santa putting wrapped gifts under the tree. To each their own.

Sleigh-riding was a big thing in the late 19th century, and it developed its own culture that was all about drinking, having a good time, and even a bit of male bravado (really getting that sleigh chugging along and taking the downhills with gusto!). “Jingle Bells” is a song that arose from this sleigh-riding culture.

On Christmas Eve, Roosevelt would get his family all bundled up and go for a more domesticated sleigh ride to church.

Unfortunately, we don’t get enough snow here in Oklahoma to go for a sleigh ride. But one day, we’d love to spend a Christmas in a cold climate, partly to check taking a yuletide sleigh ride off the bucket list.

Teddy Roosevelt was a regular churchgoer and always attended Christmas Eve service with his family. He’d typically attend Christ Church while residing in Oyster Bay and Grace Reformed Church when he lived at the White House.

Roosevelt had fond memories of singing Christmas songs with his congregation in Oyster Bay:

Our family goes to Catholic Mass on Christmas Eve. The sights, sounds, smells, and chance to belt out Christmas hymns help get us in the spirit.

Now that you know how to celebrate this most wonderful time of year like Teddy Roosevelt, have yourself a very Bully Christmas!

Theodore Roosevelt for the Holidays: Christmas and Thanksgiving with the Bull Moose by Joshua Hodge

Christmas Past: The Fascinating Stories Behind Our Favorite Holiday’s Traditions by Brian Earl