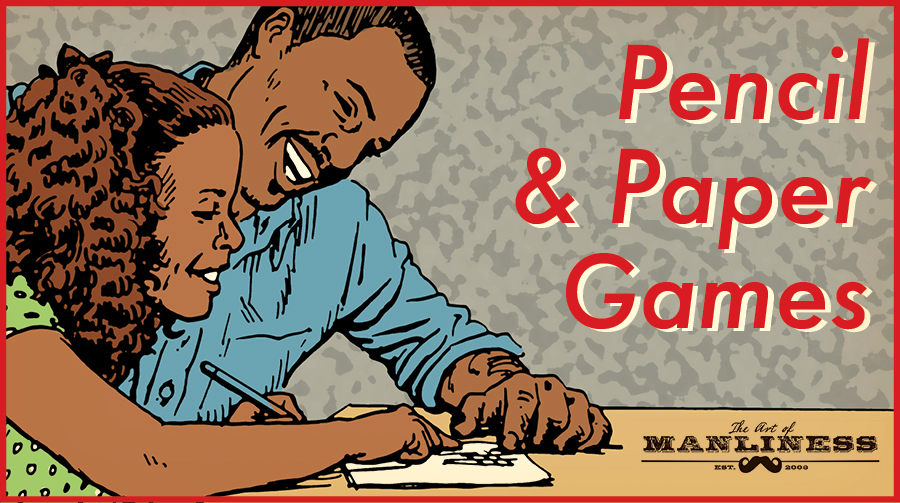 With our archives now 3,500+ articles deep, we’ve decided to republish a classic piece each Friday to help our newer readers discover some of the best, evergreen gems from the past. This article was originally published in June 2018.

In a time before people could cure their boredom by looking down at their phone and immediately retreating into an individual silo of entertainment, slaying its specter was often a cooperative exercise, requiring nothing more than a pencil and paper.

Even though pen and paper games have been supplanted by phone toggling when it comes to passing the time, it’s still handy to keep a few of them in the back pocket of your brain. These “analog” games come in handy for times when your phone’s out of charge, or when you want to entertain a kid without resorting to handing them a device. Their discreet-ness also makes them useful for work or church meetings where you’re bored out of your skull, but not supposed to be on your phone. Pencil and paper games are an all-around great source of impromptu entertainment, as you’ll almost always have all the supplies needed for their play on hand.

When it comes to such games, you surely already know tic-tac-toe (which once you learn how to win, becomes super boring). So here are 5 more pencil and paper games that will help you, and a compatriot, while away the time. 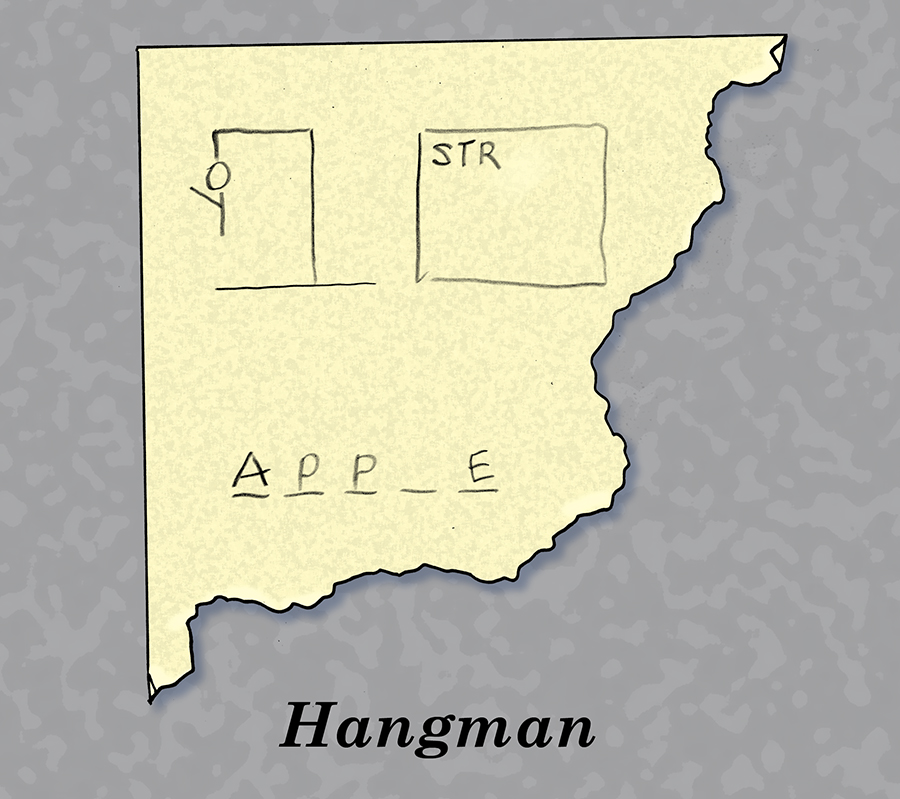 This classic boredom killer is an oldie but a goodie.

Hangman can be played with two or more players.

Start off by drawing a basic looking gallows. This is where you’ll keep track of incorrect guesses in this game.

One person thinks of a word (without telling the other players) and marks out the number of letters in dashes on the paper.

The other players take turns guessing letters one at a time. Whenever a player guesses a letter in the word correctly, you write that letter above the corresponding dash.

If they guess incorrectly, draw a body part of the hangman on the gallows. Typical order is head, body, right leg, left leg, right arm, left arm, noose. So basically, players have seven chances to guess the correct letters. If a complete hangman is made before the correct word is guessed, the game ends. You can increase the number of chances players get to guess by increasing the number of body parts that are added before the hapless stick victim gets the noose — left eye, right eye, nose, mouth, ears, etc. Just make sure everyone is on the same page as to what constitutes a complete hangman before you start.

A player wins the game when they guess the correct word. They can guess the entire word at any point in the game. A wrong word guess also results in a body part added to the hangman.

You can write incorrect letter guesses next to the gallows so players can see which letters they’ve already guessed. To make the game harder, don’t list missed letter guesses, and count duplicate wrong guesses against them.

The classic board game (turned terrible movie) actually got its start as a pencil and paper game. The old-school version has the advantage of not needing those annoying little pegs or a manufactured game board, making starting a spontaneous showdown, or playing in the car on a long road trip, much easier.

This is a two-player game.

Make sure neither player can see the other’s grids.

On the “My Ships” grid, each player outlines the five ships that represent their fleet.

A fleet consists of the following:

Each ship occupies adjacent squares on the grid, horizontally or vertically. No diagonal ships.

Here’s an example of a fleet layout you might have: 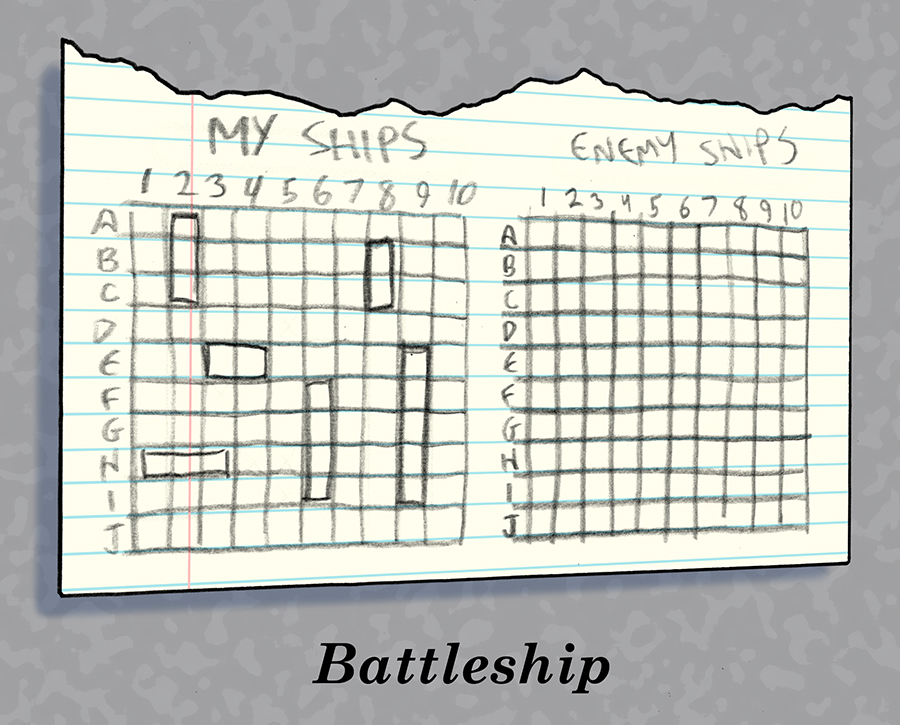 Once each player has drawn out their fleet, the play begins. Players take turns taking shots at their opponent by calling out coordinates of a square. For example, B-10, G-5, D-3. 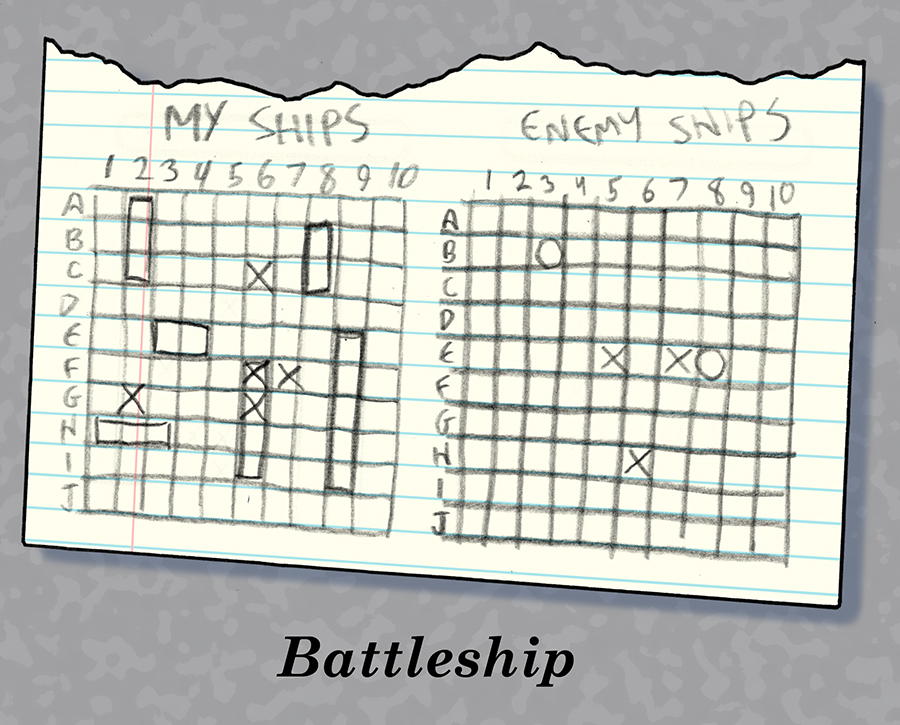 If an opponent hits all the squares in a ship, you must call out the name of the ship (e.g., “You sunk my battleship!”)

First player to lose all his ships loses the game. 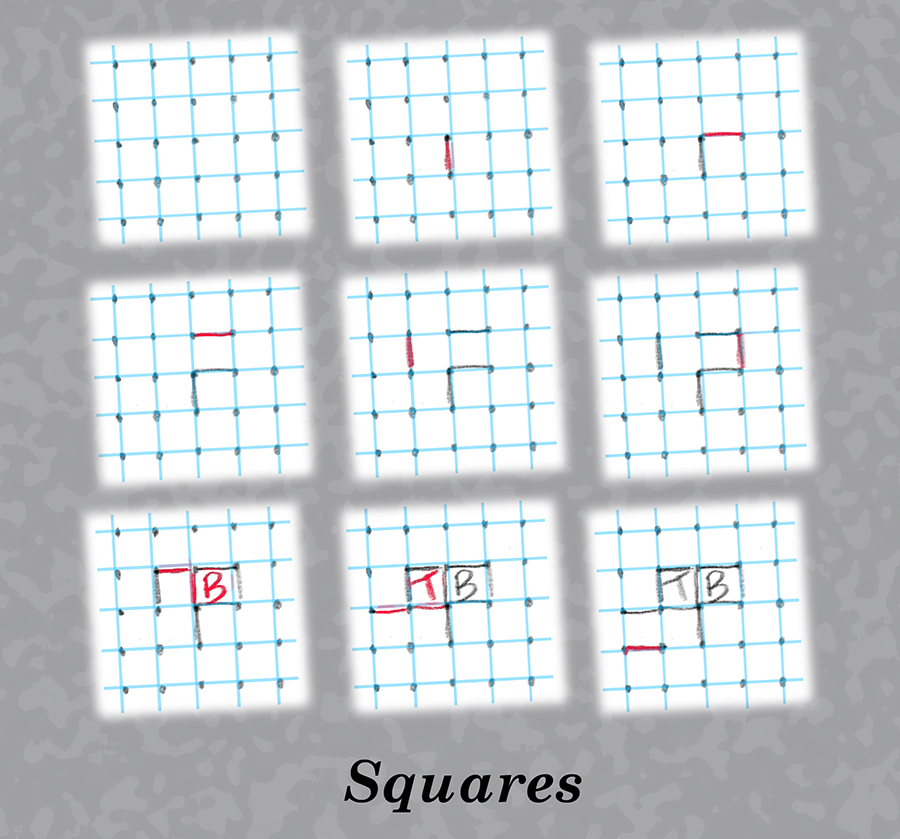 This was a game my brother and I played quite a bit on the back of the paper program at church services.

Draw a grid of dots – it can be as large or as small as you want. The larger the grid, the longer the game lasts. 10×10 is good-sized “field of play.”

Each player takes a turn drawing a line between two dots. You can connect dots horizontally or vertically. The goal is to create a box. If a player completes the fourth side of a box, he writes his initial in the box. When a player completes a box, he gets another immediate turn to connect the dots.

The game is over when the grid has been completely filled with boxes. The player with the most boxes wins.

This is a two-player game created by Hungarian mathematician László Kozma.

Create a grid of squares at least 6×6. The larger the grid, the longer the game will go.

Each player takes turns writing their mark in one of the squares on the grid. But here’s the catch: You can only mark a square if all of its neighbors (including the diagonal neighbors) are empty.

Here’s an example of a game so you can see play in action: 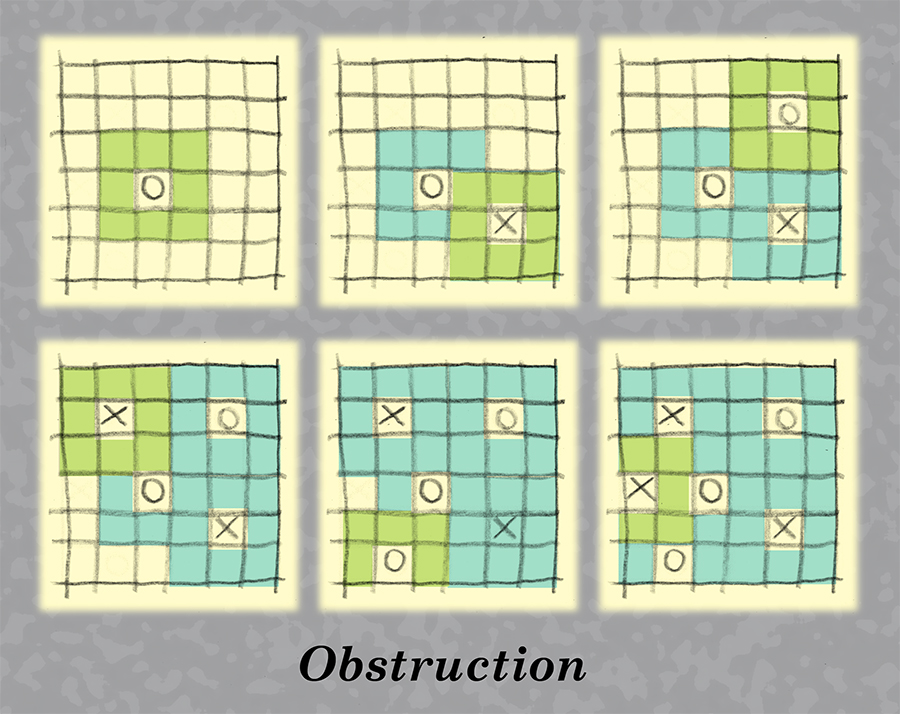 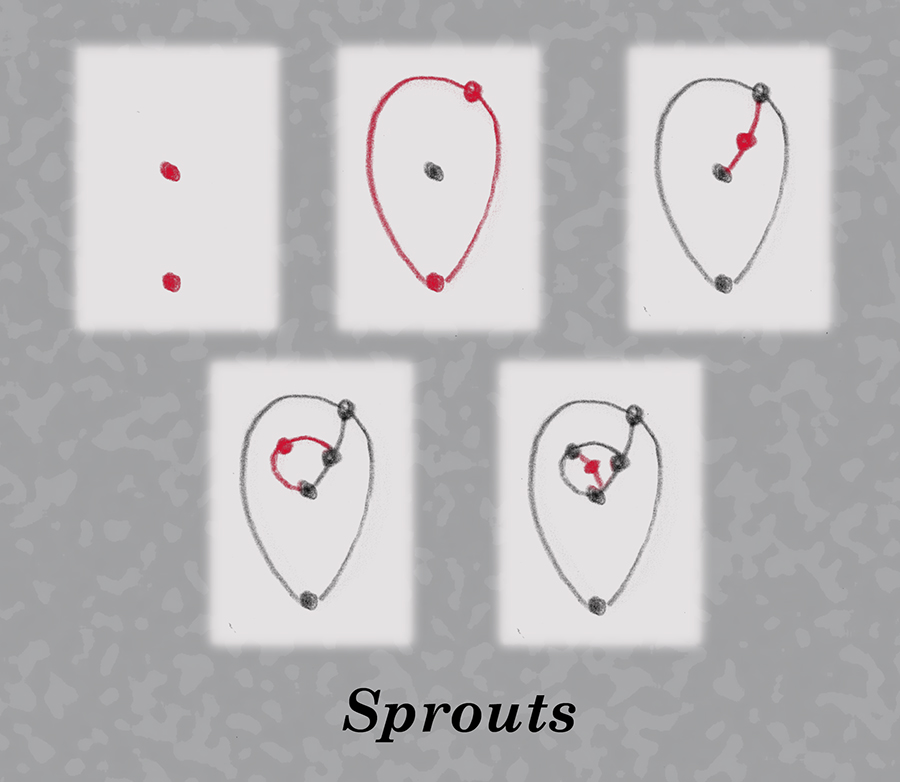 Sprouts is another pencil and paper game invented by a math whiz. Actually two: John Horton Conway and Michael Paterson.

This is a two-player game. Start off by drawing two or more spots on a sheet of paper.

Players take turns according to the following rules: