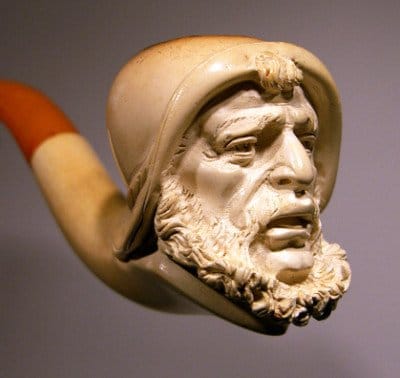 The Song of the Pipe


When the night air is shading ’round you,
And the lake is lying still;
When you hear the evening tuning,
Of the lonely whippoorwill;
When the woods are big and silent,
And the world seems all at rest;
And the cheerful fire is blazing,
Then your good old pipe is best.

When you are tired out from tramping,
Through the winding forest ways;
And you’ve had your trout and coffee,
And you dream of future days;
When you sit close to the fire,
Then the time is surely ripe;
With the owl’s bark resounding,
To fill up the good old pipe.

When the dreary rain is falling,
And the world is wet and gray;
When the loon’s long, dismal holler,
Rolls out clear and dies away;
When the woods are all adripping,
From the alder to the oak;
Then just lay back in your chair,
And hit good old pipe, and smoke.

Whether clamped between the teeth of General Douglas Macarthur as he surveyed the progress of the Allied efforts from aboard ship during World War II, or nestled in the weathered hands of your grandfather as he sits back in his favorite chair and relives the adventures of yesteryear to a captive audience of grandchildren, the tobacco pipe exudes manliness. And while Macarthur’s oversized corncob pipe and your grandfather’s traditional briar pipe are certainly pipe smoking classics, nothing reflects the character of the smoker more than a meerschaum. Simultaneously a smoking implement and a work of art, meerschaum pipes not only boast stunning visual appeal but are known for the quality smoke they provide as well.

And Just What Is Meerschaum Anyway?

Meerschaum is a clay-like white mineral known for its porous nature. The use of meerschaum for pipe making dates back to the early 18th century, and many examples of meerschaum pipes still exist, some even unsmoked, as they were often seen as art as much as smoking implements and were kept behind glass. Meerschaum is valued by pipe makers and collectors for three reasons. Most notably for the tobacco enthusiast, meerschaum does not burn as opposed to briar or other traditional pipe materials, allowing for a purer smoke. Aesthetically, meerschaum is noted for two key characteristics. First, the softness of the mineral makes it very suitable for carving, with designs ranging from basic to extravagant.

The characteristic most prized by collectors, however, is due to the composition of the mineral itself. Meerschaum is by nature extremely porous. Indeed, the quality of meerschaum can be tested by wetting your finger and rubbing the mineral. If the moisture absorbs, you know you’ve got the good stuff. Thus, when a meerschaum pipe is smoked, the oils and other byproducts of the process are absorbed into the pipe itself, eventually coloring the pipe from its original whitish-cream color through a spectrum of woody yellows, nutty browns, and deep reds. This coloration only adds to the individuality of each meerschaum pipe. As pipe smokers usually consider their pipes a very personal item, these characteristics, which combine to make each pipe not only unique but decidedly personal, are what make the meerschaum pipes the king of the tobacco world and a must have for collectors.

While meerschaum deposits are relatively rare, there are several located across the globe, most notably those of the Eskişehir region in Northwest Turkey. The overwhelming majority of meerschaum pipes on the market today are crafted with material from the mines in Turkey. Several grades of meerschaum pipes exist, and the quality of the pipe depends not only on where the meerschaum comes from, but the process with which it was obtained.

A quality meerschaum pipe must be carved from a solid block of meerschaum, and the deeper the meerschaum deposit, the better quality of mineral you will have. By utilizing a solid block of meerschaum and carving out the pipe design, all the attributes of the meerschaum, its porous and easy to carve nature, are perfectly preserved. Lower quality meerschaum pipes are made from the dust and shavings that are left over from the mining and carving process. These leftovers are then mechanically pressed into solid form, resulting in a product which is to solid meerschaum as particle board is to oak. Pressed meerschaum pipes do not retain the porous nature of their solid block counterparts and are typically sold at bargain prices to amateurs who do not know any better.

From Simple to Extravagant

Your first mental image of a meerschaum pipe is probably that of a white pipe carved to resemble a pirate head, or possibly a Viking. Such designs are relatively common, and certainly the most memorable, but there exists a myriad of styles and designs ranging from the simple to the simply ostentatious. Many meerschaum purists prefer simple bowl designs which resemble standard briar pipes and showcase the coloring and smoking quality of the meerschaum the best. Others, however, are drawn to the ornate carvings and designs available. Designs range from simple patterns carved into the bowl of the pipe, to a bowl being cradled by a hand or claw, to heads of various historical characters and beyond. Here’s just a few examples of the artwork that can be created in the hands of a skilled meerschaum craftsman: 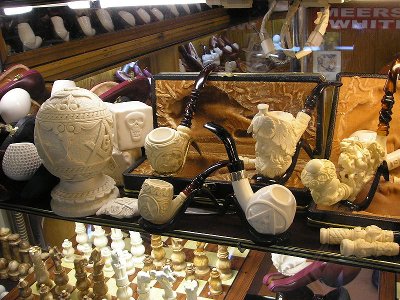 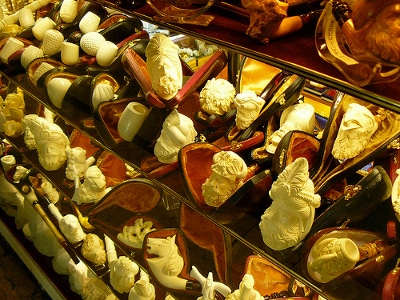 Photo by Kathy Gray. Taken in the Grand Bazaar in Istanbul. 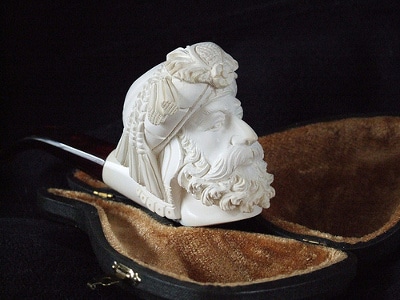 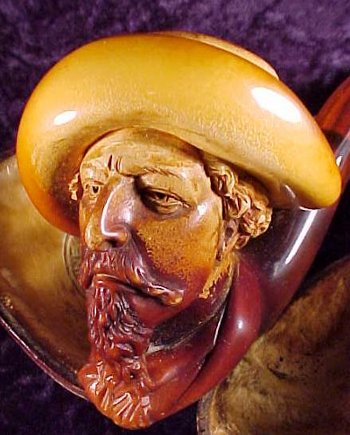 A Buffalo Bill Cody meerschaum pipe illustrating the coloring of a pipe that occurs with regular smoking.

Another popular variant of the meerschaum is the calabash pipe. Traditional calabash pipes are honed from the stem of the calabash gourd, which is treated and lined with meerschaum. Modern variants have replaced the calabash gourd stem, which is extremely costly to produce, with less expensive mahogany, which retains the original design but loses value as a collectible. This pipe, made famous by Sir Arthur Conan Doyle’s Sherlock Holmes, is known both for its beautiful simplicity and the quality smoke provided by the meerschaum lining and the “cooling chamber” that exists below the bowl, allowing for a cool, smooth smoke. 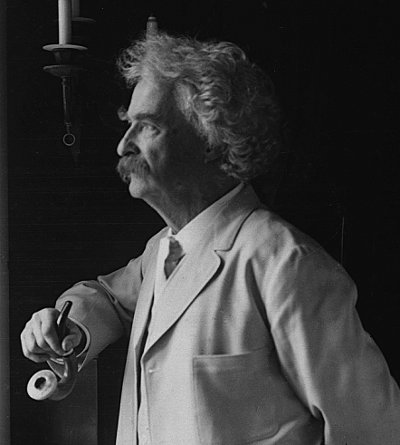 A calabash pipe in the hands of Mark Twain.

For both the connoisseur and the beginner, choosing a pipe is a very personal choice that can potentially reflect your personality in a way few other personal items can. For the quiet, brooding types, a large bowl with a simplistic design will allow for long, ponderous smokes without drawing unwanted attention. For the more extravagant among us, nothing says “look at me” more than lighting up a smoke atop this fitting example: 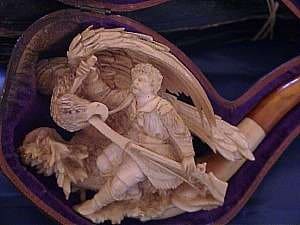