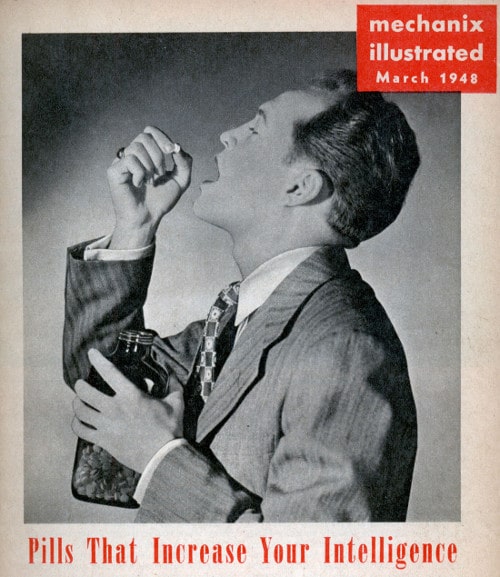 Editor’s Note: This is a guest post from Mans Denton.

For all the discussion about health and fitness, the primary driver of the human organism is often left out: the brain.

Since the 1950s, neuroscience has made discoveries that we can use to improve our memory, focus, alertness, and general cognitive abilities.

The application of these discoveries led to the birth of “nootropics,” a term coined by a Romanian doctor named Corneliu Giurgea in 1972 after discovering a family of “smart drugs.” Nootropics are natural and synthetic compounds that can improve your general cognitive abilities, such as memory, attention, focus, and motivation.

Despite the relatively new term, smart drugs have been used for thousands of years. In the absence of modern technology and scientific understanding, ancient cultures utilized herbs to improve cognitive function on all corners of the globe. Records of traditional Chinese medical doctrine date all the way back to 1100 BCE; and in Ayurvedic medicine on the Indian subcontinent, herbs were utilized as cognitive enhancers as early as 5000 BCE.

Caffeine in tea form was discovered between 1500 and 1000 BCE in China, while the more potent coffee beverage was popularized in the 13th and 14th centuries. The human love affair with brain boosting substances is ancient, but only recently has science caught up with our ambitions. What follows is a brief description of nootropic benefits, a list of recommendations, tips on customizing your usage, and a few words of caution.

How to Approach the Use of Nootropics

Unfortunately, so far there has been no pill invented that will instantly transform you into a cognitive superman, a la the movie Limitless. There are no shortcuts to mental sharpness: the foundation of cognitive deftness and fortitude remains study, discipline, and regularly engaging in attention-strengthening exercises.

Rather than giving you mental strength, nootropics can simply enhance the mental strength that you’ve already built the old fashioned way. Approach them the very same way you do supplements for your physical workouts. Downing pre-workout drinks and whey protein isn’t magically going to turn you into a ripped strongman if you don’t use them in conjunction with hitting the gym. In the same way, nootropics won’t transform you into a genius, but they can give your brain a stronger “pump,” and help you hold on to the gains you make from your mental exercises.

Ancient medical practices recognized the different applications for various herbal remedies, and modern nootropics have a wide variety of uses as well. There are five main applications for nootropics, which all require specific supplementation. The specifics of the compounds I mention can be found below.

Memory – For young adults and the elderly alike, a better memory is always useful. Many nootropics are specifically designed to prevent the type of neurological degradation that causes Alzheimer’s, senile dementia, and Parkinson’s. Young individuals can retain material more efficiently when using memory-enhancing nootropics. Some smart drugs are better utilized for short-term/working memory, while others operate with longer-term effects. Piracetam, choline, and creatine are common memory enhancers.

Focus – Anybody that has experience with coffee knows the advantage of enhanced focus and attention. Many of the smart drugs that improve focus or alertness are stimulatory in nature, but also create a sense of clarity. Caffeine is a nootropic when paired with L-theanine. Asian ginseng and CILTeP also improve focus.

Mood Enhancer – Some nootropics enhance cognitive function by improving mood and reducing anxiety. In numerous studies, reduced anxiety results in higher test performance for a variety of cognitive indicators (including short and long-term memory). Caffeine and L-theanine is a mood enhancer, along with bacopa monniera and Asian ginseng.

Many nootropics have evidence to support these claims, but unfortunately, due to poor funding, long-term studies have not yet been done. Therefore, the long-term effects — whether for good or ill — of utilizing smart drugs on the brain is yet unknown.

Where to Get Nootropics

Below, we get into the specifics of nootropics and dosage recommendations. Many of them, however, are probably compounds you’ve never heard of. So where do you go to find these nootropics?

Some nootropics are available at brick and mortar stores that specialize in health products, like GNC and Whole Foods. The downside with going this route is that the prices tend to be higher and the selection lower.

For lower prices and better selection, buying online is the best route to go. But make sure to only buy from reputable dealers. Anyone can fill a pill with rice powder and pass it off as the real deal. To avoid being sold a bottle of snake oil, I recommend only purchasing supplements that come with 3rd party certificates of analysis for safety purposes. Also check out online reviews and forums for recommendations on reputable dealers. Here’s one to peruse: http://www.reddit.com/r/Nootropics/

Nootropics are typically single-chemical compounds extracted from nature or synthesized by man. Combining compounds together for synergistic effect is called “stacking.” For beginners, here are a few compounds and stacks that are safe to choose from.

Surprise! There is something better than caffeine alone. L-theanine is an amino acid found in green tea that can negate many of the side effects of excessive caffeine usage while enhancing the positives. Advantages of using L-theanine with caffeine include:

For those who consume caffeine regularly, a dosage of 100mg caffeine and 200mg L-theanine is best. Beginners can see positive effects with as low as 50mg of caffeine and 100mg of L-theanine, but the 1:2 ratio is best.

For the same reason that creatine is useful for improving muscle mass and strength, it serves as a powerful nootropic as well.

Using creatine for cognitive purposes requires doses of 5 grams per day. At this rate, it will take around 2 weeks to start seeing an effect, but users can utilize a “loading phase” of 20 grams per day for 5 days to speed up this process before reverting back to 5 grams per day.

The neurotransmitter benefits include improved acetylcholine release (involved with enhanced memory) and reduced stress on dopaminergic systems, which regulate the dopamine neurotransmitter related to happiness and pleasure.

Using 300mg of bacopa monniera extract (50% bacosides A and B) is best for beginners. Unlike other herbs, bacopa is fat soluble so it is best to take this with some type of dietary fat source; a piece of meat or a meal with cooking oil will suffice. Traditional Indian villagers use ghee with bacopa monniera.

The first “nootropic” found in 1972 was piracetam, which is a derivative of the neurotransmitter GABA. Scientists are still unclear about the exact mode of action, but piracetam does increase acetylcholine uptake and utilization in regions of the brain responsible for memory formation. Early studies on animals and humans showed that piracetam alone could improve memory better than a placebo, but combining choline with piracetam was even more effective.

Choline is a useful nootropic alone, as it is the dietary precursor to acetylcholine (which improves memory formation). Most people do not consume enough organ meat and eggs to fulfill choline needs, which makes it useful to supplement. The combination of choline and piracetam is not only effective for improving memory in young adults, but is also a leading treatment for Alzheimer’s, senile dementia, and other neuro-degenerative diseases in the elderly.

Another interesting feature is the use of this stack for lucid dreaming. Lucidity is an awareness of being within a dream and manipulating events consciously.

Piracetam is the most popular and most well-known of the racetams, but there are structurally similar chemical relatives that have varying effects. Aniracetam is a more potent analogue that absorbs quickly, but does not last long. Oxiracetam is a neuro-protective agent that can halt and reverse brain trauma, while newer analogues like coluracetam and phenylpiracetam are still being tested in a laboratory setting.

A starting dose of 1600mg of piracetam is sufficient, though some people can utilize up to 6 grams. The most effective sources of choline are alpha GPC and CDP choline (200-300mg of either), rather than taking lecithin or choline bitartrate.

This high-altitude herb is utilized as a mood enhancer and anti-fatigue agent. Rhodiola can help improve mood and enhance memory by increasing serotonin levels. Chronic usage of rhodiola can reduce reaction time and improve reasoning skills as well. The increased mood is often responsible for enhanced performance, which is why traditional Chinese medicine relied heavily on rhodiola (called “Hong Jing Tian”).

Starting with 350mg of rhodiola (3% rosavins) once a day can improve mood and reduce mental fatigue similar to creatine. Unlike creatine, rhodiola is an adaptogen that benefits from routine cycling rather than daily use. For rhodiola, a 3:1 ratio “on” and “off” is optimal, but individual guesswork is needed.

A new and more advanced nootropic combination is CILTeP, which stands for “chemically induced long-term potentiation.” The combination of artichoke extract and forskolin improves cAMP and inhibits PDE-4, which theoretically improves alertness, focus, and memory.

CILTeP is the result of a collaboration of the nootropic community. It came out of an open-source process instead of a laboratory. The ingredients were tweaked by dozens of nootropic users (including Tim Ferriss) to find the optimal doses, but has been completely untested in a research setting.

Like diets and other lifestyle choices, the best nootropic stacks and combinations are often based on the individual. Many nootropics interact differently from one person to the next, which is why subjective, personal testing can be an effective tool for optimized cognitive enhancement. Test out different stacks and determine for yourself what works best.

Some products, such as Onnit’s Alpha Brain, try to help individuals with pre-made combinations. Alpha Brain has many effective compounds, including alpha GPC choline and L-theanine, but many of the ingredients aren’t at a level that will serve as an effective dose for everyone.

OptiMind is another nootropic with pre-made combinations (Editor’s Note: This is what I use on a daily basis).

1. You must track results. There are many different modern technologies that can allow you to test and track nootropic usage to ensure they are having a positive effect on your cognition. No matter what area of cognition you are improving, Cambridge Brain Sciences and Quantified Mind have various tests to track progression. Even the Mercury App, which offers subjective testing based on feelings, can help you determine whether certain nootropics are working for you.

2. Do not become attached. People using nootropics sometimes fall victim to attachment either physically and/or mentally. Physical addictions to caffeine, rhodiola, and phenibut can reduce cognition and alter brain chemistry in the long-term. Mental addiction is harder to distinguish, but equally disastrous; any time you feel a need for nootropics, take a break. Use smart drugs in special situations rather than craving enhancement all the time.

3. Nootropics are not a substitute. If you are chronically under-slept, have a poor diet, and do not exercise routinely, nootropics will not solve all of your problems. Proper lifestyle choices are the number one priority; cognitive enhancement through nootropics is just a bonus in times of need.

Being mindful of these three rules and starting slowly with nootropics can expand your capabilities and help you to achieve your goals. Traditional cultures across the world have utilized many of these cognitive enhancing compounds for thousands of years, but modern science is validating their claims and making nootropics more accessible for everyone. Most importantly, they will allow you to break free from genetic limitations and deficiencies.

Check out my podcast with Kamal Patel on the real science of nutrition and supplements.

Mans Denton is a biohacker hoping to optimize mental and physical capabilities by any means necessary. He blogs at The Hacked Mind and manages Pure Nootropics, which focuses on a small line of safe smart drugs.