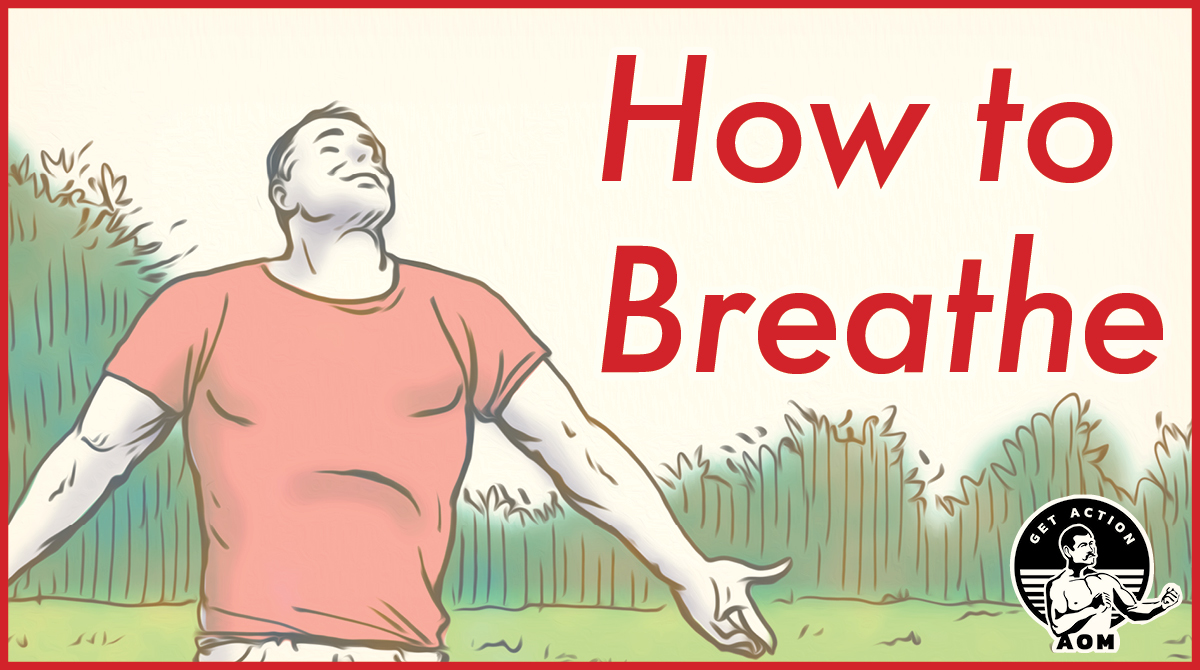 How to breathe? Do people really need instructions on breathing? I mean, isn’t doing so as natural, as, well, breathing?

Did your chest go up and down?

Congratulations, you just failed at breathing.

Surprisingly enough, even something as supposedly instinctual as breathing can go awry. But don’t worry, by the time you finish this article, you’ll be on your way back to the kind of optimal breathing you did as a baby, and the better health that comes with it. 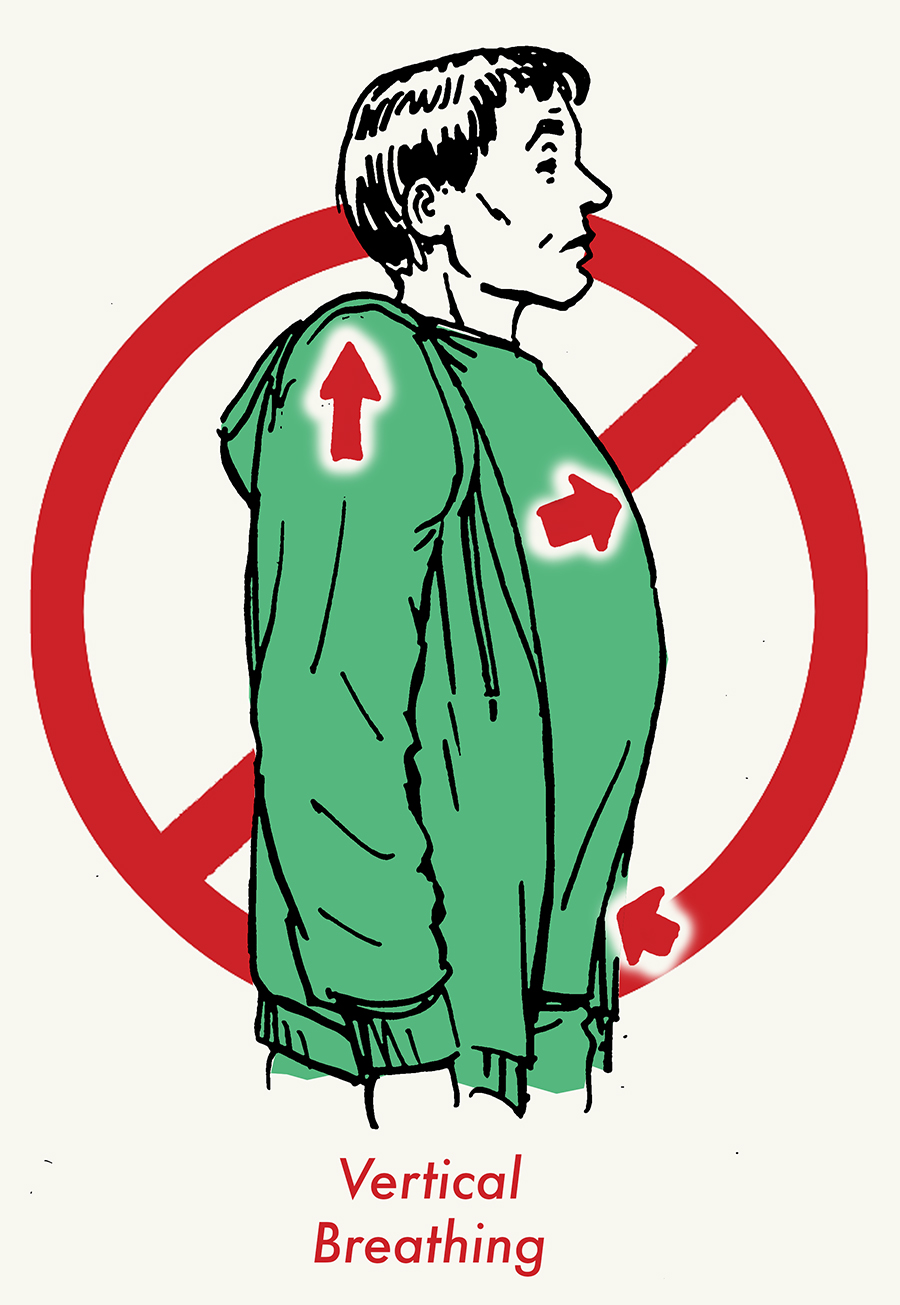 The majority of people in today’s modern world don’t breathe the way the body is designed to breathe.

While it may feel like you’re taking a full breath when you breathe vertically, you’re not. You’re primarily using the tops of your lungs, which are the smallest parts of these organs. By using less of your lungs to inhale, you’re depriving your body of the oxygen it needs to function at its best.

But vertical breathing doesn’t just diminish our inhaling; it also messes up our exhaling. A vertical breath doesn’t allow us to expel all of our air completely. As Dr. Vranich explains, by not fully exhaling, you don’t allow your lungs room to breathe in fresh, new air. You can’t take a full, deep breath because there’s no room in your lungs to do so. This feeling like you can’t really breathe deeply is called air hunger, and it can lead to some health issues like vascular dementia (more on that in a bit).

Vertical breathing isn’t all bad. It’s what your body does naturally when your fight or flight response kicks on. It’s when you’re breathing like that all the time that it becomes a problem.

Why Most Modern People Breathe Poorly

You didn’t start out life doing vertical breathing, and if it’s inefficient and causes potential health problems, why do most modern Westerners fall into this pattern?

In her book Breathe, Dr. Vranich traces the cause to the following factors:

Poor breathing patterns can also be caused simply by being dealt a crummy genetic hand. Chronic allergies, asthma, or a deviated septum can prevent you from breathing properly. In addition to working on your breathing patterns, you’ll need to see a doctor to address these underlying issues.

Other Types of Breathing Issues

According to Dr. Vranich, these include:

The Health Risks of Poor Breathing

“Alright,” you might be thinking. “I’m a vertical breather. But big whoop. I’m alive. I run 5Ks. It must not be that big of a deal that I’m not breathing the way nature intended me to.”

Dr. Vranich lays out several health issues that can come from improper breathing, and they all stem from a decrease in oxygen. Since your body uses oxygen for a host of physiological processes, when you’ve got less of it, your body and mind don’t function at their best. This can result in:

The bottom line here is that while poor breathing might not kill you right away, it can be a contributing factor to myriad health issues and make you feel a low-grade crappiness.

In addition to exercising, eating right, and getting enough sleep, breathing the way nature intended can help optimize your health and well-being.

So let’s dig into how to do it.

How to Breathe Correctly 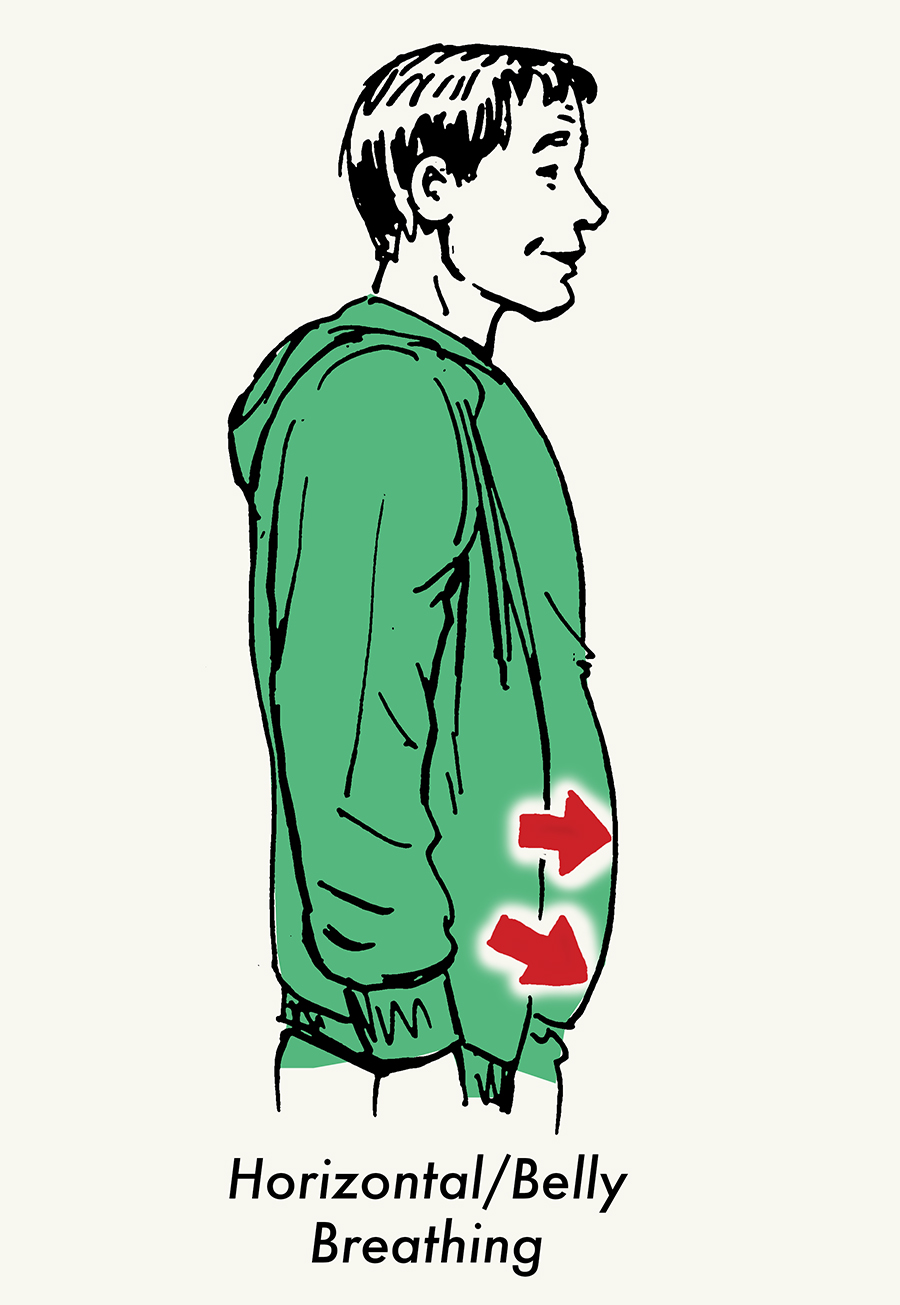 Yes, yes it does. 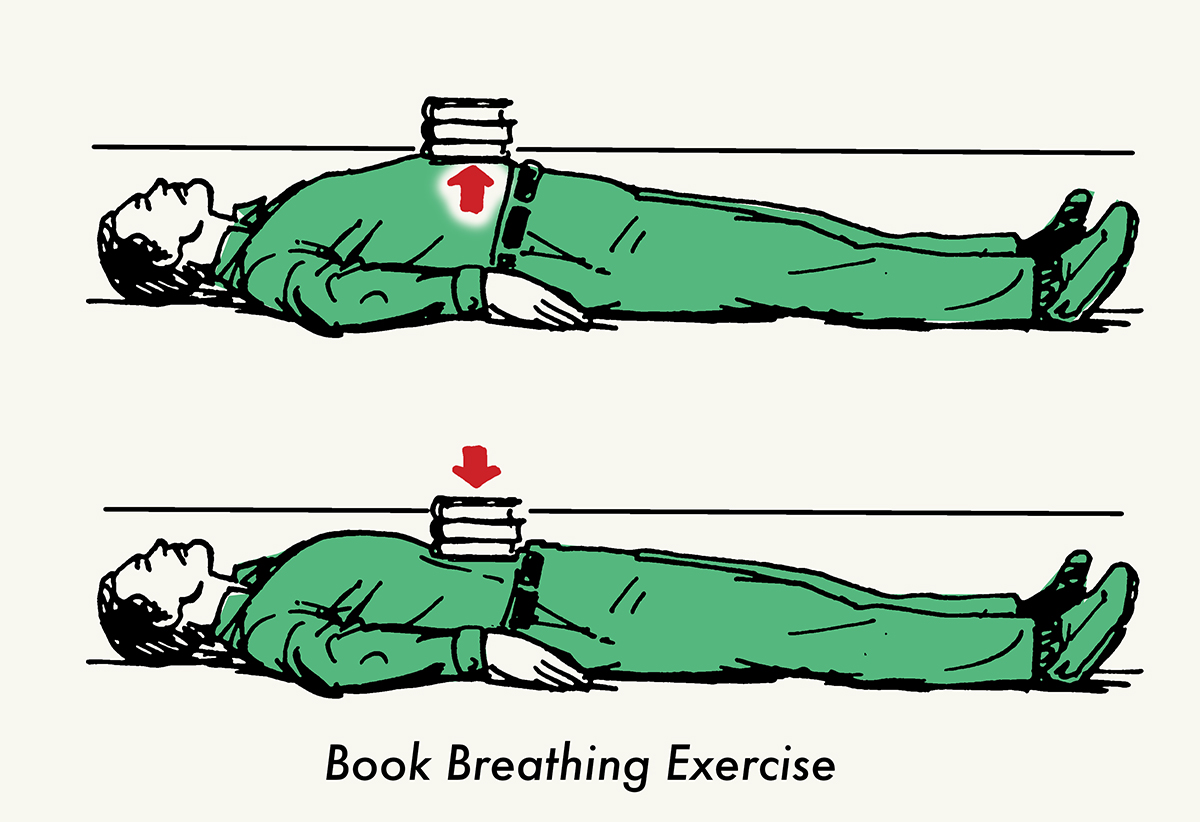 The best way to feel and see what proper diaphragmatic breathing feels and looks like is to do this simple exercise:

Now that you’ve experienced what horizontal breathing feels like while lying down, stand up and take another breath. Your belly should be moving out while your shoulders and chest stay still.

Getting the inhale part of a proper horizontal breath is pretty easy for most folks. The exhale part is a bit trickier.

According to Dr. Vranich, when most people exhale they just relax their stomach and sort of collapse their torso. While that will let some of the air out of your lungs, it doesn’t get all of it out. You need to actively squeeze out the rest.

How do you do that?

By using your pelvic floor. 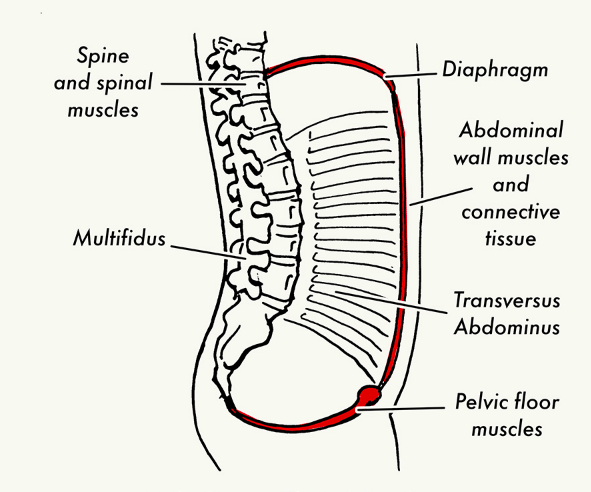 You might be thinking “How are the pelvic floor muscles, which are pretty far away from the lungs, involved with breathing?”

Take a big belly breath in. When you exhale, instead of just relaxing your stomach muscles, squeeze your lower abs and contract your pelvic floor muscles like you’re trying to hold in your pee. Feel how that muscle contraction helps push the air out of your lungs more effectively. 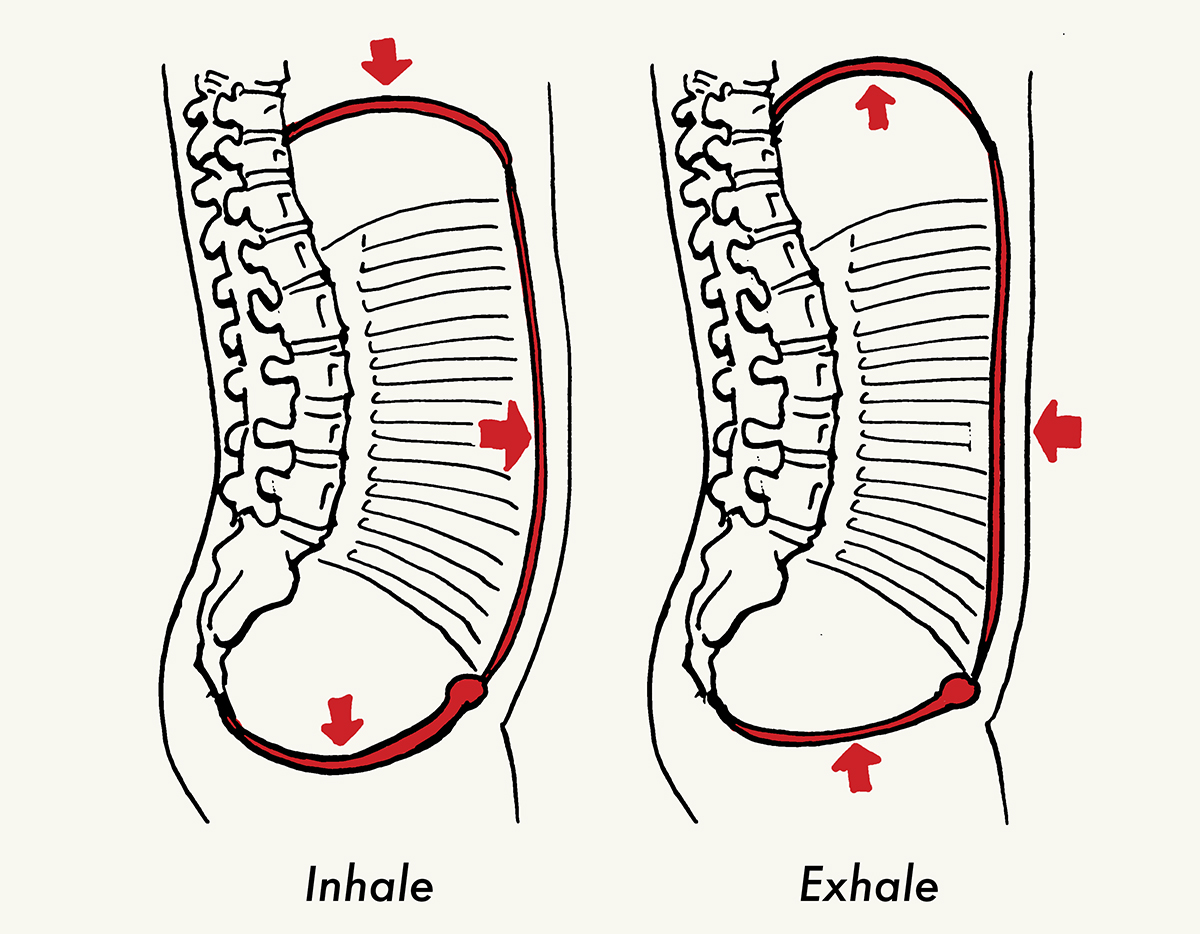 This back and forth between the diaphragm and pelvic floor muscles as you inhale and exhale is sort of how billows work. The diaphragm expands to fill your lungs up with air. Then your pelvic floor contracts to push it out.

In our podcast interview, Dr. Vranich described what happens when you bring the inhale and exhale together to take a proper breath:

[On the] exhale, you squeeze your ribs, your abs, and you contract your pelvic floor.

This is how to breathe properly. This is how nature intended us to breathe before we picked up all those bad habits thanks to modernity.

If you have a baby, watch them sleep. This is how they breathe. Their belly goes out when they inhale, and when they exhale, they actually do it with a bit of force because they’re using their pelvic muscles. Their billows are working as designed.

After years of improper breathing, you’ll have to train yourself to breathe like this again. Spend 5 to 10 minutes each day deliberately practicing your natural and correct breathing. Dr. Vranich recommends doing it right before going to sleep at night, as the slow, deep breathing will help you better relax and drift into slumber.

Throughout the rest of your day, be mindful of your breath (as well as your overall posture). If you notice you’re doing the shallow, vertical breath, shift to a horizontal breath. Eventually, it will become your default again.

Now, will you notice immediate, dramatic effects once you start breathing correctly? Some people Dr. Vranich has worked with did. That could happen to you, too. For me, the benefits of proper breathing came on much more slowly and subtly. My brain feels a bit sharper and I feel a lot more relaxed. Whenever I find myself in a funk, one of the things I focus on is making sure my breath gets back into that natural and effective breathing pattern.

Now you know how to use your lungs at their fullest capacity. Go ahead and breathe a sigh of relief. But don’t forget to contract those pelvic floor muscles when you do.

Be sure to listen to my interview with Dr. Vranich for even more on the science of breathing and additional tips: