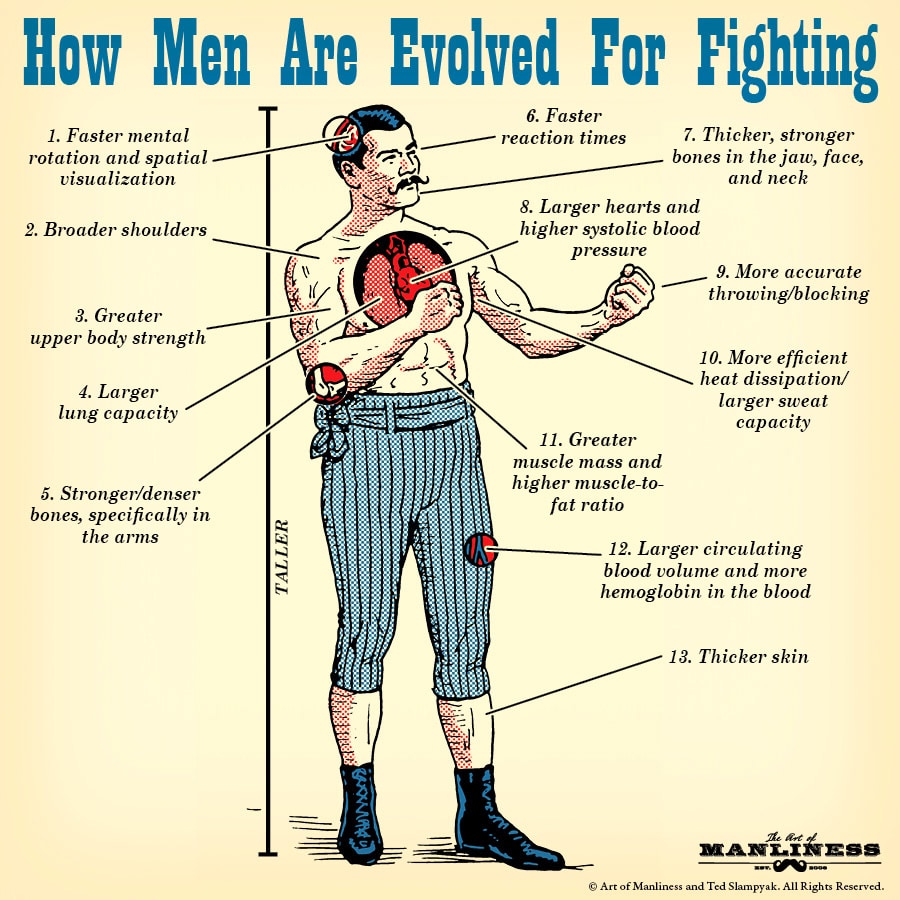 Statistics also show that men are more likely to commit violent crimes than women. These violent crimes range from assault and battery in a barroom fight to straight-up homicide.

But other researchers from the fields of evolutionary biology and anthropology suggest that while social conditioning may have some influence on male behavior, men are in many ways biologically and psychologically wired to fight.

In a 2012 paper entitled “The Importance of Physical Strength to Human Males,“ a group of academics from the fields of anthropology and evolutionary psychology compiled research from several domains that suggest that evolutionary and reproductive pressures in our distant past nudged males in our species to develop a propensity for risk taking and violence, as well as physical traits that would be valuable in violent confrontations. The features researchers think are the result of selection for fighting are those which testosterone turns on and grows — e.g., think of the way the surging testosterone in an adolescent male during puberty increases the size of his musculature and capacity for upper body strength.

Because the competition for resources and reproductive success was much more intense among males than females, being bigger, stronger, and more adept at fighting provided a big advantage for men.

Basically, the argument is that much of what makes men different than women can be chalked up to males’ need to fight other males.

The fields of evolutionary psychology and biology are often very speculative, and it’s impossible to say that X traits definitely developed for X reason. For example, there are researchers who say that the structure of the human hand developed to allow us to make a fist and punch each other better, while others say its structure evolved to allow us to make and use tools. The intersection of biology, psychology, and sociology is quite complex, and boiling down who we are to a simple matter of evolution would be short-sighted and reductionist.

Those caveats aside, the speculation is certainly fascinating to entertain! Just because you’re wired to fight, doesn’t mean you’ve got to become a full-time fisticuffer, but you might look for ways to scratch that primal itch. Plus it’s just cool to look in the mirror at your naked body in the morning, and realize that your unique features were designed for combat. You’ve got warrior DNA. It’s certainly good motivation to get to the gym and not let traits thousands of years in the making go to waste. Honor your ancestors!

Next time you’re giving yourself a look over, contemplate these features that may have been made for combat:

2. Broader shoulders. Allows for more forceful punching and throwing. Broader shoulders also served as a deterrent to would-be aggressors. They signaled “Don’t mess with me, I can pummel you.” Because of their signaling ability, anthropologist Richard Wrangham has said that broad shoulders “are the human equivalent of antlers.”

7. Thicker, stronger bones in the jaw, face, and neck. Stronger, thicker facial and jaw muscles and bones allow for better absorption of the energy of a punch, lessening the possibility of a broken jaw or concussion.

12. Larger circulating blood volume and more hemoglobin in the blood. Increased oxygen efficiency that could come in handy while battling another. Men also have higher circulating clotting factors compared to women which leads to faster wound healing.

13. Thicker skin. Possibly aides in the prevention of wounds that may occur during physical combat.