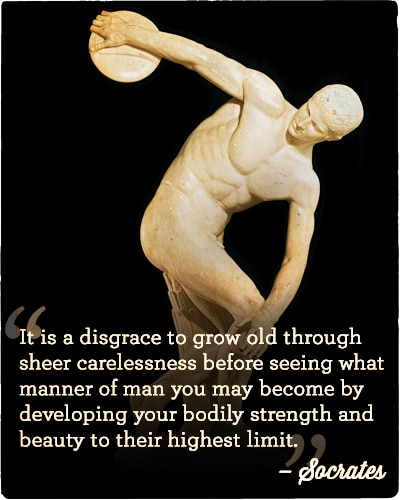 Editor’s Note: In his Memorabilia, Xenophon, a student of Socrates, shares a dialogue between Socrates and one of Socrates’ disciples named Epigenes. On noticing his companion was in poor condition for a young man, the philosopher admonished him by saying, “You look as if you need exercise, Epigenes.” To which the young man replied, “Well, I’m not an athlete, Socrates.” Socrates then offered the following response.

Just as much as the competitors entered for Olympia. Or do you count the life and death struggle with their enemies, upon which, it may be, the Athenians will enter, but a small thing? Why, many, thanks to their bad condition, lose their life in the perils of war or save it disgracefully: many, just for this same cause, are taken prisoners, and then either pass the rest of their days, perhaps, in slavery of the hardest kind, or, after meeting with cruel sufferings and paying, sometimes, more than they have, live on, destitute and in misery. Many, again, by their bodily weakness earn infamy, being thought cowards. Or do you despise these, the rewards of bad condition, and think that you can easily endure such things? And yet I suppose that what has to be borne by anyone who takes care to keep his body in good condition is far lighter and far pleasanter than these things. Or is it that you think bad condition healthier and generally more serviceable than good, or do you despise the effects of good condition? And yet the results of physical fitness are the direct opposite of those that follow from unfitness. The fit are healthy and strong; and many, as a consequence, save themselves decorously on the battle-field and escape all the dangers of war; many help friends and do good to their country and for this cause earn gratitude; get great glory and gain very high honors, and for this cause live henceforth a pleasanter and better life, and leave to their children better means of winning a livelihood.

I tell you, because military training is not publicly recognized by the state, you must not make that an excuse for being a whit less careful in attending to it yourself. For you may rest assured that there is no kind of struggle, apart from war, and no undertaking in which you will be worse off by keeping your body in better fettle. For in everything that men do the body is useful; and in all uses of the body it is of great importance to be in as high a state of physical efficiency as possible. Why, even in the process of thinking, in which the use of the body seems to be reduced to a minimum, it is matter of common knowledge that grave mistakes may often be traced to bad health. And because the body is in a bad condition, loss of memory, depression, discontent, insanity often assail the mind so violently as to drive whatever knowledge it contains clean out of it. But a sound and healthy body is a strong protection to a man, and at least there is no danger then of such a calamity happening to him through physical weakness: on the contrary, it is likely that his sound condition will serve to produce effects the opposite of those that arise from bad condition. And surely a man of sense would submit to anything to obtain the effects that are the opposite of those mentioned in my list.

Besides, it is a disgrace to grow old through sheer carelessness before seeing what manner of man you may become by developing your bodily strength and beauty to their highest limit. But you cannot see that, if you are careless; for it will not come of its own accord.