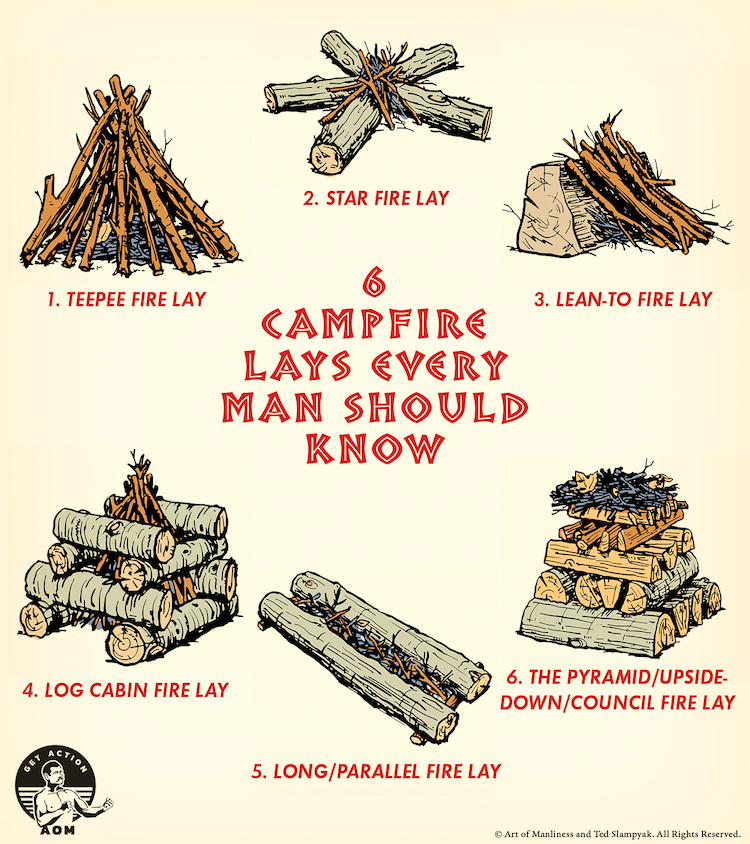 Every man should know how to build a fire. But every outdoor situation requires different types of campfire lays (set-ups in the firewood), so it’s imperative to know how to make more than one kind.

Here we highlight six of the most common and useful fire lays.

There’s a reason this is the go-to campfire lay for most outdoorsmen: it’s very easy to get a fire going with a teepee lay. It’s also a great fire for cooking and warmth. The one downside of a teepee fire lay is that it burns quickly, requiring a lot of fuel to keep it going.

Many other fire lays rely on a teepee lay to initially get going, so it’s a vital lay to master.

How to make: Place your tinder bundle on the ground. Above your tinder bundle, use kindling to build a small teepee. Start with small twigs and build up to large sticks. Leave an opening in your teepee on the side the wind is blowing against. This will ensure that your fire gets the air it needs for effective combustion. Light your tinder bundle. As the fire gets going, add increasingly thick sticks, and eventually large fuel logs, in the same teepee shape.

If you’ve watched old Western movies, you’ve likely seen a star fire lay. It’s the fire lay of choice for cowboys ranging in areas where there isn’t much wood. The star fire lay doesn’t make a very big or hot fire, but it’s economical in terms of fuel and easy to set up.

How to make: Lay five or six logs on the ground like the spokes of a wheel. The arrangement will look like a star. Inside the hub of your wheel/star, start a small fire with a teepee lay. As the main logs of the star lay burn, push them towards the center.

The lean-to fire lay creates a protective canopy under which you can place your tinder bundle. As such, it’s a good fire lay to use in windy or rainy conditions. The trade-off is that this set-up does restrict airflow a little, so it can sometimes make getting a fire going a bit harder.

How to make: Place your tinder against a large log. Lean small twigs and sticks against the log and above your tinder pile. Now you see why it’s called a “lean-to.” Light your tinder bundle.

One glance at its structure and it’s easy to see how the log cabin lay got its name. You’re going to build a small log cabin with fuel logs around a small teepee fire lay. The resulting fire burns big and hot and doesn’t require as much tending once you light it, as the flames start burning the big logs which form the log cabin shape.

How to make: Start off by building a small teepee fire lay. Get large pieces of fuel wood and place them on opposite sides of the teepee. Lay other pieces of wood across the first set of fuel wood, parallel on the other sides of the teepee. Think of the way you build with Lincoln Logs. Build your log cabin until it’s the same height as your teepee, more or less. Light the teepee on fire.

The structure of the parallel/long lay funnels air into the fire, creating a hotter burn, which can come in handy for cooking. Because the structure blocks the wind from the sides, it can also be a good fire lay for windy conditions.

How to make: Place two large long green logs parallel to each other about six inches apart. Start a small teepee fire in between the logs. You can also dig a long trench in the ground and start a fire inside the trench. Rest pots and pans across the logs or trench to create a makeshift cooking range.

The ultimate “set it and forget it” fire lay, this campfire will last for hours without tending. While it does take more work to set it up and get it going, if you need a fire that will keep you warm through the night, without you having to frequently arise to fuel it, this is the lay for you.

How to make: Stack your fuel logs in a pyramid shape, each layer perpendicular to the next. Start with the largest logs on the bottom. With each new layer, use smaller pieces of wood. Position logs so there’s minimal spacing between them. On top of your pyramid, place your tinder and build a small teepee fire. Light your tinder bundle. As each layer of the pyramid burns, it sinks and falls, igniting the layer below it. The fire feeds itself.