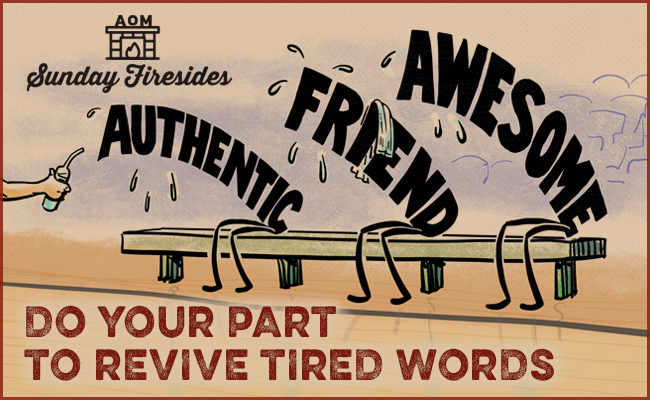 Tortilla chips made with “love.” (Though that likely isn’t among the top five emotions experienced by the worker who churns out those chips on the factory line.)

Companies that refer to their employees as “family.” (Because dear kin will terminate your relationship without warning and give you fifteen minutes to pack your stuff and vacate the premises).

Automakers that equate their vehicles with “freedom.” (Nevermind the shackles those monthly loan payments will burden you with).

The corporate world has pillaged some of society’s best words — used the potency of their original meanings to trigger our acquisitive appetites or paint a sad workplace in a rosier glow, and thereby eviscerated those meanings in the process.

But it isn’t just institutions that are guilty of enervating the gems of our language.

Folks who refer to someone they networked with a couple times online as a “friend”; influencers who claim to present a self that’s entirely “authentic” while striking a pose that’s anything but; adults who describe their mild childhood teasing as “traumatic” — individuals can rob once-weighty words of their former heft too.

When words get tired out from abuse and overuse, we have little language left with which to express ourselves accurately and sincerely.

If a pizza is “awesome,” what do we call a literally awe-inspiring sunset? If any stranger is your “brother,” what do you call someone who’s spent years earning your trust? If sharing a mental health struggle on social media — to universal affirmation and acclaim — is “courageous,” what do we call an act that requires real, potentially-costly risk?

To preserve the proper punch of words, and the value of the things they denote, we all must act as language conservationists, turning away from mercenary manipulations that attach meaningful monikers to empty packaging, and ever aiming ourselves to speak with greater care.