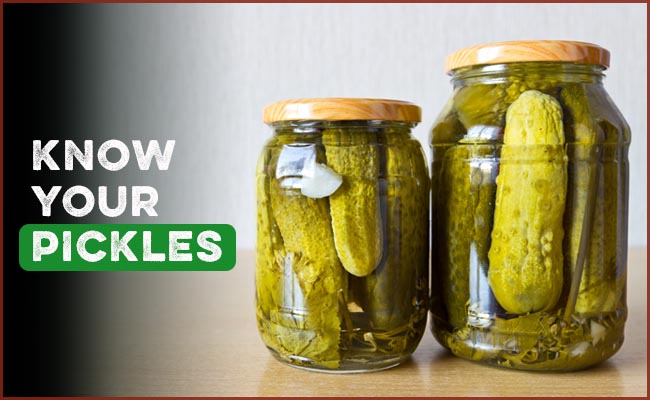 Man, I love me a good pickle.

There’s something about that salty, sour, sometimes sweet taste that really hits the spot.

Pickles are delicious on their own.

When I’m craving a late-night snack, I’ll just eat some pickles straight from the jar. They’re a satisfying food that doesn’t have a lot of calories; pickles always fit your macros, baby.

A decidedly not low-calorie twist on the stand-alone pickle snack is batter-dipped, deep-fried pickles. Have you ever had fried pickles? The best.

Pickles are also an awesome accompaniment to other foods.

All kinds of foods.

I’m always generous with my pickles on my burgers.

I’ll throw pickles on the eggs that I eat every morning.

When you go to Chick-fil-A, order the spicy chicken sandwich, well done, with extra pickles. You won’t regret it.

Man, my mouth is watering just thinking about pickles.

Below I share my findings. After reading this article, you’ll be able to drop expert pickle knowledge bombs at your next cookout as you throw some pickles on your burger. And on everything else.

A Brief History of Pickles

Pickling is the process of preserving food by either fermenting it with brine or submerging it in vinegar.

While pickling has been used across time and cultures to preserve all sorts of food, these days, when someone says, “Hey, pass the pickles,” there’s a particular type of pickled food they’re referring to: pickled cucumbers.

You’ll find lots of websites claiming that pickled cucumbers have been a thing since the days of ancient Babylon and that Roman soldiers ate pickled cucumbers to give them strength. But according to a 2012 Annals of Botany paper, it’s more likely that ancient references to cucumbers were actually describing snake melons — a melon that looks and tastes like a cucumber, but is a melon nonetheless.

It wasn’t until the Middle Ages that cucumbers became the go-to pickled produce of choice in Europe. This is likely the beginning of “pickle” as a noun meaning “pickled cucumbers.” During the Renaissance and the Age of Exploration, pickled cucumbers were enjoyed by sailors, Queen Elizabeth I, and Shakespeare.

Pickles came to America with early explorers and settlers. During the late 19th and early 20th century migration of Eastern Europeans to New York City, Ashkenazi Jews brought their unique kosher pickling process to America. Kosher pickles quickly became the condiment of choice in Jewish delis, and the delicious pairing of pickles with fatty meat was born.

Two Ways to Pickle a Pickle

There are two primary ways to pickle a pickle: submerging a cucumber in vinegar and fermenting it with salt.

If you pick your pickles off the grocery store shelf, you’re purchasing pickles that were preserved using vinegar. The typical vinegar used for store-bought pickles is distilled white vinegar. One thing to note about vinegar pickles: they’re not fermented.

Vinegar pickles are typically pasteurized, a heating process that slightly cooks the pickles.

The upside of pasteurizing is that it kills all the bacteria in the pickles and allows a jar of unopened pickles to be stored at room temperature on a grocery store or pantry shelf for up to two years (you should refrigerate pasteurized vinegar pickles after opening the jar).

The other way to pickle a pickle is to use salty water (i.e., brine) to ferment the cucumber. The brine kills the harmful bacteria that cause food to spoil and allows a salt-tolerant bacteria called Lactobacillus to thrive and convert sugars from the cucumbers into lactic acid. This process is called lacto-fermentation. Lactic acid is a natural food preservative and gives pickles their tangy, punchy flavor.

The potential upside of fermenting pickles is that it preserves a cucumber’s crunch and full-bodied taste; fermented pickles have more of a “punch” when you eat them, which some people like and some people don’t. They definitely burn more than vinegar pickles.

The fermenting process also introduces gut-friendly probiotics into the pickles, which can contribute to a healthy gut microbiome in those who consume them.

You’ll typically find fermented pickles in the refrigerated section of your grocery store next to the sauerkraut.

On the flip side, pickles fermented with salt water often have vinegar added for flavor, as an additional preservative, and to control the fermentation process (vinegar slows it down).

The 4 Types of Pickles Every Man Should Know 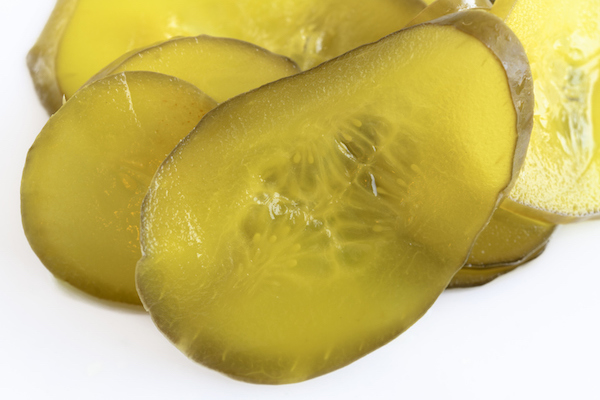 Dill pickles are the most popular type of pickle out there. They’re called dill pickles because of the generous amount of dill herb contained in the vinegar or brine. Dill pickles can be served whole, sliced, or in chips. Great on just about anything.

Kosher dill pickles haven’t necessarily been prepared using the dietary standards of traditional Jewish law. Instead, the kosher description refers to a pickling process made famous by Jewish immigrants in New York City. Kosher dills are made with kosher salt (natch) and an ample amount of garlic in the marinade.

In NYC, there’s a distinction made between two types of kosher dill pickles fermented with salt: half-sour and full-sour.

Bread-and-butter pickles have sugar added to the pickling marinade, which gives them their distinctive sweet and sour flavor.

The sugar in bread-and-butter pickles is balanced by spices (typically celery seed, mustard seed, and turmeric), and this mixture of the sweet and the savory is what arguably makes them the most delicious, all-around pickle. They’re particularly great on burgers and sandwiches.

So why are they called bread-and-butter pickles? The story is that married Illinois pickle farmers Omar and Cora Fanning, who were sometimes hard up for money, would pickle the runts of their cucumber crop with a sweet and sour recipe and then barter them for actual bread and butter at their local grocery store. They trademarked their pickles as “Fanning’s Bread and Butter Pickles” in 1923, and the bread and butter name stuck as a generic descriptor of any kind of sweet and sour pickle.

Gherkins (also sold as “barrel pickles”) are baby cucumbers with bumpy skin that are pickled. They’re often sold in the “sweet” variety, which has the sweetness of a bread-and-butter pickle, without the spices. You eat gherkins whole.

Cornichons are the French version of gherkins. They’re marinated in vinegar and tarragon, giving them a tart taste. You usually see cornichons served as a garnish with sandwiches and even hot dogs.

Those are the main pickles you’ll see in your grocery store. What spices and aromatics are used to make pickles, along with the ratios of these spices, can change how they taste in a wide variety of ways. So within the above categories, each company will have their own recipe that results in distinct flavors, and you’ll want to sample the pickles out there to find the ones you like the best. Keep in mind that pickles aren’t hard to make yourself, so consider creating your own as well.

Whatever pickle you go with, make sure you have your fridge constantly stocked with them. There’s nothing sadder than opening the fridge door, only to find the pickle jar empty. That’s a real pickle.