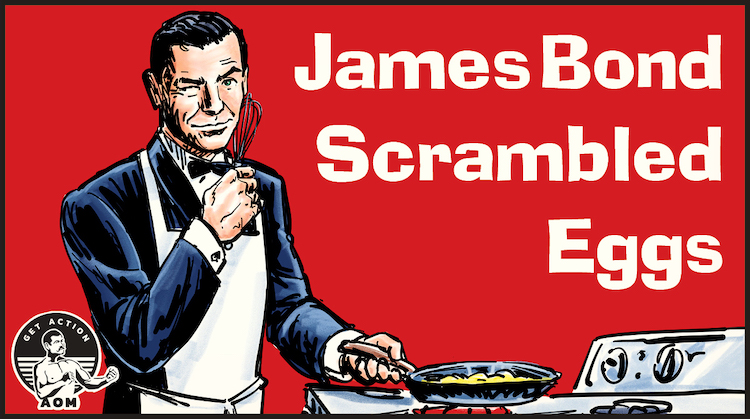 In addition to being a cold, effective secret agent, the James Bond of Ian Fleming’s novels is also something of, well, a foodie. Over the course of the book series (you can find the series’ five best installments here) Fleming describes, often in sumptuous detail, seventy of 007’s meals. Bond noshes on crab, samples caviar, and sips champagne with relish, but with the lack of affectation and air of indifference with which he goes about all activities. His knowledge of food is part of his savoir faire — his ability to fit into and make the most of all situations. The fine meals he often enjoys amidst his missions are also little respites from the stresses that come with his line of work — “wonderful moments of consolation . . . for the darkness and danger of his profession.”

But while Bond’s tastes can lean towards the gourmet while on assignment (might as well charge a fine dining meal to one’s expense account if tomorrow you may die!), in his more day-to-day life, he’s content with simpler fare: sandwiches, steaks, and, very especially, scrambled eggs. Indeed, there are only three books in Fleming’s twelve book series in which scrambled eggs are not mentioned.

In From Russia With Love, Fleming writes that “Breakfast was Bond’s favorite meal of the day,” but 007 doesn’t reserve the eating of scrambled eggs for the a.m. — he also enjoys them for lunch, dinner, and even a late-night repast. He often eats the dish with buttered toast (frequently paired with marmalade) and bacon or sausage, and washes it down with black coffee (sometimes doctored with a nip of something stronger).

While Bond’s scrambled eggs are typically prepared for him by others — his beloved Scottish maid and the cooks of the restaurants he patronizes — he also knows how to make them himself, as evidenced by his whipping up a “vast” amount of them in the short story “The Living Daylights,” and the footnote in “007 in New York,” in which Fleming, who was himself a scrambled eggs devotee, shared his creation’s recipe for the dish.

Below you’ll find that recipe quoted verbatim, followed by a visual guide to making it, along with our personal commentary and opinion as to how 007’s eggs turned out.

Break the eggs into a bowl. Beat thoroughly with a fork and season well. In a small copper (or heavy-bottomed saucepan) melt four oz. of the butter. When melted, pour in the eggs and cook over a very low heat, whisking continuously with a small egg whisk.

While the eggs are slightly more moist than you would wish for eating, remove pan from heat, add rest of butter and continue whisking for half a minute, adding the while finely chopped chives or fine herbs. Serve on hot buttered toast in individual copper dishes (for appearance only) with pink champagne (Taittainger) and low music. 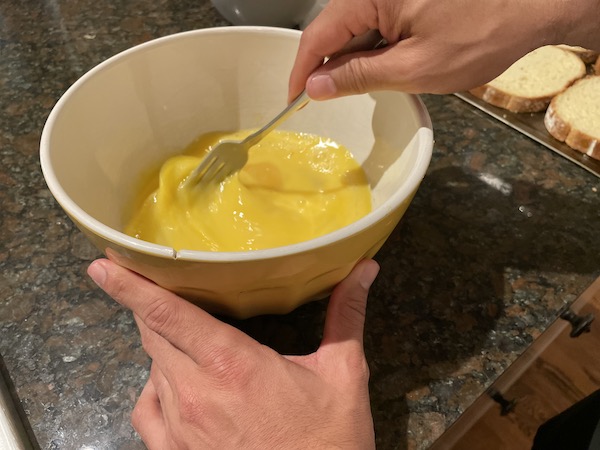 Beat a dozen eggs with a fork. 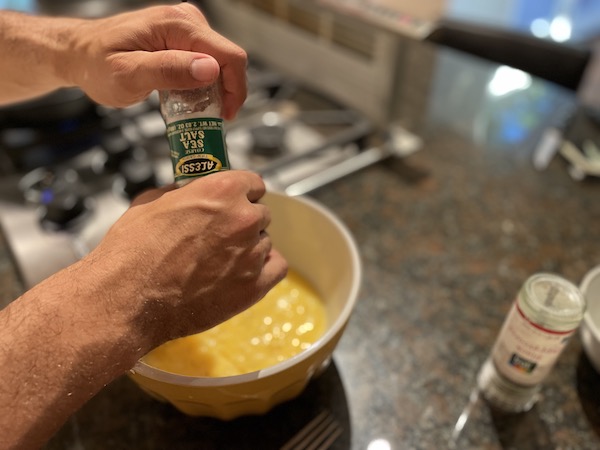 Season with salt and pepper. 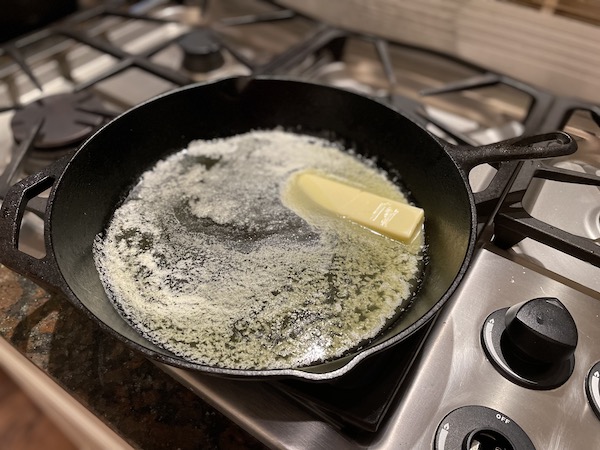 4 ounces of butter doesn’t seem like a lot until you start weighing it out on a food scale and realize . . . it amounts to an entire stick. Melting down a entire stick of butter to receive the eggs felt kind of revolting, but we’d come too far to back out now! 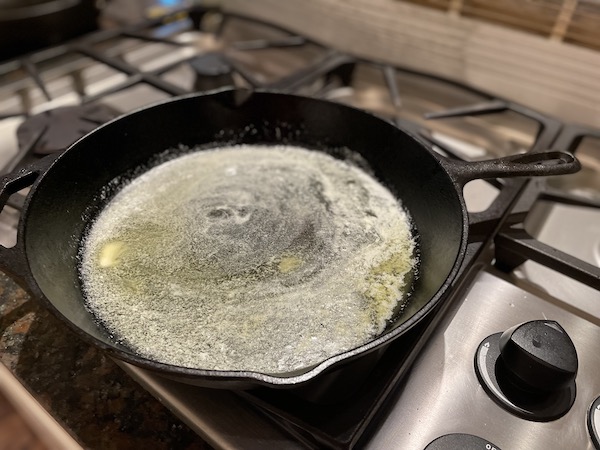 If his deadly archnemeses didn’t kill Bond, all this butter would have. Just kidding, butter won’t kill you. Just wanted to make a joke that your Snackwells-eating mom would have enjoyed in 1995. 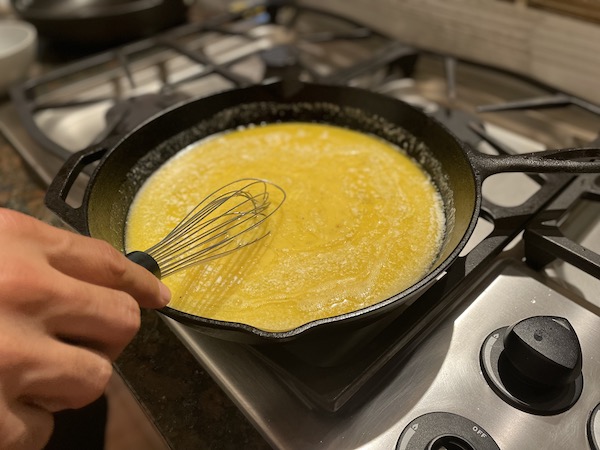 Adds eggs to the butter pool. 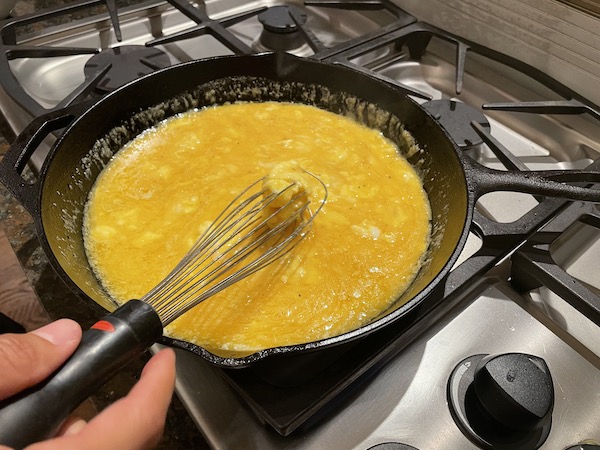 The instructions say to cook on low, but there’s so much liquid, that even after several minutes they’d hardly cooked at all. We cranked it up to medium at that point. Might be better to heat the pan to medium initially, then turn it down to low after you add the eggs. 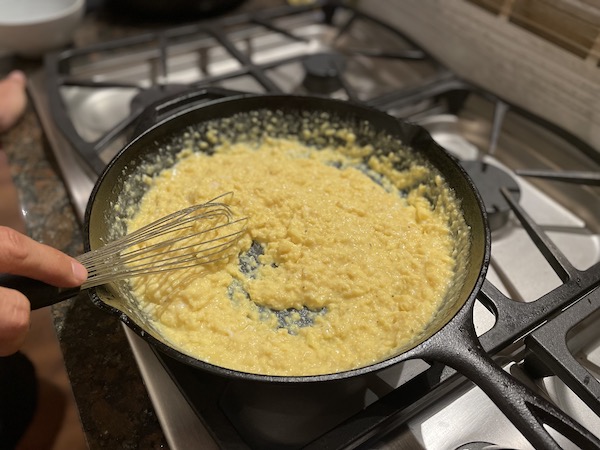 Give the eggs regular whisking as they solidify. 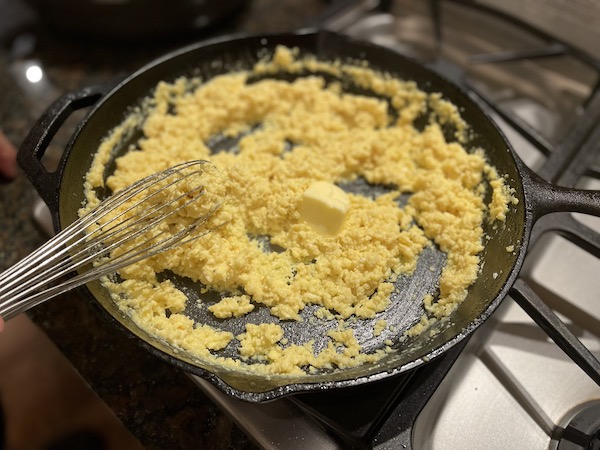 Once the eggs are just a bit moister than you like to eat them, remove the pan from the heat and add . . . heaven help us all . . . more butter. The recipe says you can add 1-2 ounces; that’s around 2-4 tablespoons of butter. Being sane, we opted for the lower end and did just an ounce. If you’d like to mix up your fat bomb here, the original manuscript that contained the recipe included this postscript from Fleming’s secretary: “I think you sometimes add cream instead of the last piece of butter.” 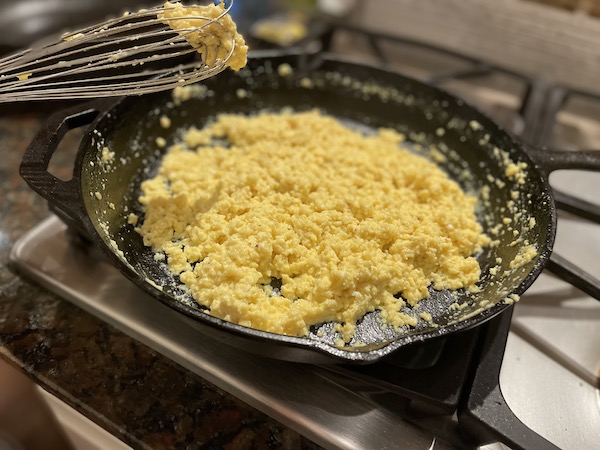 Finished. The recipe calls for herbs, but the kids vetoed that addition. 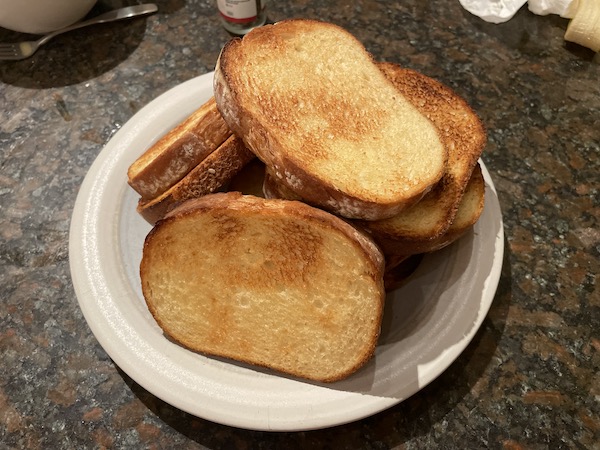 We made a batch of toast big enough for “four individualists” by brushing each side of slices of bread with . . . yup, more butter . . . and broiling both sides in the oven. 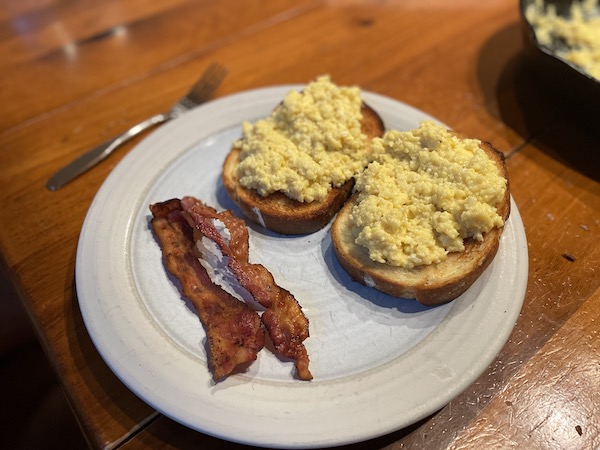 Served. We skipped the champagne and low music, and added bacon.

And how were they? Well, it’s hard for anything with that much butter to taste bad, naturally. The eggs were soft, moist, and kind of mushy; with all the butter, they don’t solidify like typical scrambled eggs. They were certainly rich, very rich. Which made them quite satiating, honestly; you didn’t need to eat a lot to feel full — the French paradox and all that. Overall, the eggs tasted delicious, and quite luxurious compared to the classic variety, but we won’t be eating them as often as Bond does; standard scrambled eggs, with but a pedestrian spray of Pam to fry them in, works alright by us. But if you want to sample the secret agent’s special recipe, now you’ve got yourself a license to cook.