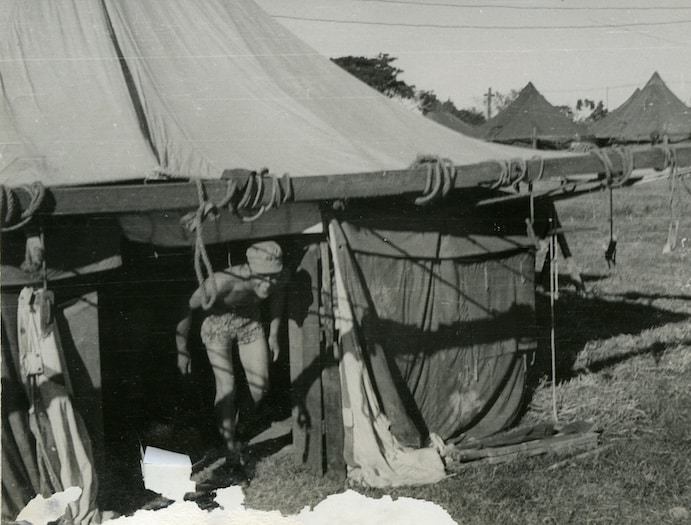 We all know what that phrase means.

It means you’re going to wear pants without underwear.

But why do we call the act of not wearing underwear beneath pants “going commando”?

Where Did the Phrase “Going Commando” Originate?

Doing some sleuthing into the deep corners of the internet on sites produced by passionate amateur etymologists, I discovered a lot of debate about the origins of “going commando.”

The first theory is that the phrase started appearing on college campuses in the 1970s as young American soldiers returned to civilian life from Vietnam. According to this theory, the phrase can be traced to the fact that soldiers deployed to Vietnam faced hot and humid conditions. This was particularly true of special operators, or commandos, who had to crawl through water and hide in the jungle brush. Tight-fitting underwear would cause chafing and irritation and eventually develop into a fungal infection called “crotch rot.” One of the remedies for crotch rot (besides talcum powder) was ventilation. So off went the underwear. Commandos, and then rank-and-file soldiers too, started calling not wearing underwear under their uniform “going commando.” When they came home, they brought the phrase to their communities and colleges, and it spread.

That’s one theory on the origin of “going commando” and the most popular one.

Another theory is that the term originated among Royal Marine Commandos deployed in the Falklands War of 1982. These special operators were tasked with making an amphibious assault on the Falklands Islands, and in the course of their mission, they ate some bad food and contracted some terrible diarrhea. To save a little time with the constant pants-dropping required to take care of their, er, business, the commandos stopped wearing underwear. One less layer to worry about. They started calling not wearing underwear “going commando.” The phrase made it back to the UK, crossed the Atlantic to the States, and found its way into common usage.

Another theory is that the phrase arose amongst the American and British commandos of WWII who had to navigate both water and land. Not wearing underwear would reduce the chafing and irritation that can occur when close-fitting underclothing gets wet.

So we have three different theories on the origin of going commando. All of them conclude that commandos did indeed go commando and skip the wearing of underwear.

I’ve read many books about military history over the years, and some of those texts mentioned the phenomenon of soldiers forgoing underwear to avoid chafing and irritation. You see these references in books about the Pacific Theater in WWII and about Vietnam – history’s hot and humid battlegrounds.

In the war documentary Restrepo, you’ll find firefight scenes with soldiers wearing only a pair of PT shorts and some body armor. They were probably going commando. Since they were fighting in dry, sometimes cold Afghanistan, the soldiers going commando in Restrepo weren’t likely trying to avoid crotch rot. Going commando was probably more of a matter of convenience.

While both the American and British militaries require enlistees to wear underwear as part of their uniform, the standards are loosened on the battlefront, where the exigencies of combat trump the stringency of dress rules. A soldier training at boot camp would likely get docked for going commando at inspection; a soldier going commando in the middle of an unexpected firefight in Afghanistan would probably get commended for his promptness and responsiveness to the attack. That famously happened to a soldier in 2009 who engaged in a firefight in his pink boxers. He didn’t get demoted; he earned praise from his superiors.

So it appears commandos did and do go commando. As did and do more rank-and-file soldiers. Civilians go commando as well, because some dudes just like how it feels not to wear skivvies sometimes.