Aesop’s fables might seem like “kid’s stuff,” and certainly their short nature and anthropomorphic characters make them an easy read for the younger set. But reading through a book of them recently I was delighted by the quick kick in the pants they provide; their short, pithy messages can assuredly be appreciated by men as well as lads. While a few of Aesop’s fables have become famous the world over, there are literally hundreds more out there. Here are just a few of my new favorites.


The Farmer and the Stork

A Farmer placed nets on his newly sown plough lands, and caught a quantity of Cranes, which came to pick up his seed. With them he trapped a Stork also. The Stork having his leg fractured by the net, earnestly besought the Farmer to spare his life. “Pray, save me, Master,” he said, “and let me go free this once. My broken limb should excite your pity. Besides, I am no Crane, I am a Stork, a bird of excellent character; and see how I love and slave for my father and mother. Look too, at my feathers, they are not the least like to those of a Crane.” The Farmer laughed aloud, and said, “It may be all as you say; I only know this, I have taken you with these robbers, the Cranes, and you must die in their company.”

Birds of a feather flock together. 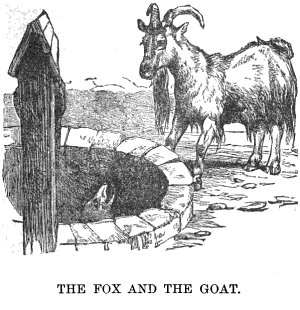 A Fox having fallen into a deep well, was detained a prisoner there, as he could find no means of escape. A Goat, overcome with thirst, came to the same well, and, seeing the Fox, inquired if the water was good. The Fox, concealing his sad plight under a merry guise, indulged in a lavish praise of the water, saying it was beyond measure excellent, and encouraged him to descend. The Goat, mindful only of his thirst, thoughtlessly jumped down, when just as he quenched his thirst, the Fox informed him of the difficulty they were both in, and suggested a scheme for their common escape. “If,” said he, “you will place your fore-feet upon the wall, and bend your head, I will run up your back and escape, and will help you out afterwards.” On the Goat readily assenting to this second proposal, the Fox leapt upon his back, and steadying himself with the Goat’s horns, reached in safety the mouth of the well, when he immediately made off as fast as he could. The Goat upbraided him with the breach of his bargain, when he turned round and cried out: “You foolish old fellow! If you had as many brains in your head as you have hairs in your beard, you would never have gone down before you had inspected the way up, nor have exposed yourself to dangers from which you had no means of escape.”

Look before you leap. 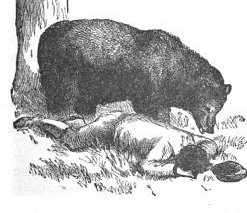 Two men were traveling together, when a bear suddenly met them on their path. One of them climbed up quickly into a tree, and concealed himself in the branches. The other, seeing that he must be attacked, fell flat on the ground, and when the Bear came up and felt him with his snout, and smelt him all over, he held his breath, and feigned the appearance of death as much as he could. The Bear soon left him, for it is said he will not touch a dead body. When he was quite gone, the other traveler descended from the tree, and accosting his friend, jocularly inquired “what it was the Bear had whispered in his ear?” he replied, “He gave me this advice: Never travel with a friend who deserts you at the approach of danger.”

Misfortune tests the sincerity of friends.

A Lion being unable from old age and infirmities to provide himself with food by force, resolved to do so by artifice. He betook himself to his den, and lying down there, pretended to be sick, taking care that his sickness should be publicly known. The beasts expressed their sorrow, and came one by one to his den to visit him, when the Lion devoured them. After many of the beasts had thus disappeared, the Fox discovered the trick, and presenting himself to the Lion, stood on the outside of the cave, at a respectful distance, and asked of him how he did; to whom he replied, “I am very middling, but why do you stand without? Pray enter within to talk with me.” The Fox replied, “No, thank you, I notice that there are many prints of feet entering your cave, but I see no trace of any returning.”

He is wise who is warned by the misfortunes of others.

A Man who had traveled in foreign lands, boasted very much, on returning to his own country, of the many wonderful and heroic things he had done in the different places he had visited. Among other things, he said that when he was at Rhodes he had leapt to such a distance that no man of his day could leap anywhere near him—and as to that there were in Rhodes many persons who saw him do it, and whom he could call as witnesses. One of the bystanders interrupting him, said: “Now, my good man, if this be all true there is no need of witnesses. Suppose this to be Rhodes; and now for your leap.”

The Huntsman and the Fisherman

A Huntsman, returning with his dogs from the field, fell in by chance with a Fisherman, bringing home a basket well ladened with fish. The Huntsman wished to have the fish; and their owner experienced an equal longing for the contents of the gamebag. They quickly agreed to exchange the produce of their day’s sport. Each was so well pleased with his bargain, that they made for some time the same exchange day after day. A neighbor said to them, ” If you go on in this way, you will soon destroy, by frequent use, the pleasure of your exchange, and each will again wish to retain the fruits of his own sport.” 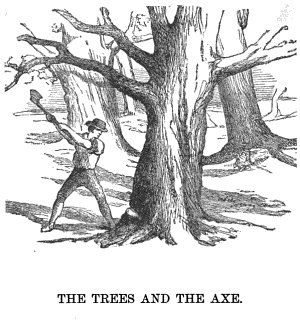 A Man came into a forest, and made a petition to the Trees to provide him a handle for his axe. The Trees consented to his request, and gave him a young ash-tree. No sooner had the man fitted from it a new handle to his axe, than he began to use it, and quickly felled with his strokes the noblest giants of the forest. An old oak, lamenting when too late the destruction of his companions, said to a neighboring cedar, “The first step has lost us all. If we had not given up the rights of the ash, we might yet have retained our own privileges, and have stood for ages.”

The Gnat and the Bull

A Gnat settled on the horn of a Bull, and sat there a long time. Just as he was about to fly off, he made a buzzing noise, and inquired of the Bull if he would like him to go. The Bull replied, “I did not know you had come, and I shall not miss you when you go away.”

Some men are of more consequence in their own eyes than in the eyes of their neighbors. 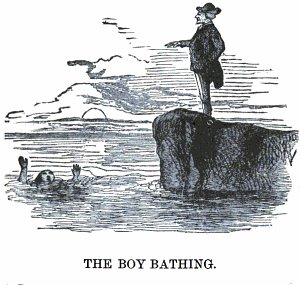 A Boy bathing in a river was in danger of being drowned. He called out to a traveler, passing by, for help. The traveler, instead of holding out a helping hand, stood up unconcernedly, and scolded the boy for his imprudence. “Oh, sir!” cried the youth, “pray help me now, and scold me afterwards.”

Counsel, without help, is useless.

The Flea and the Man

A Man, very much annoyed with a Flea, caught him at last, and said, “Who are you who dare to feed on my limbs, and to cost me so much trouble in catching you?” The Flea replied, “O my dear sir, pray spare my life, and destroy me not, for I cannot possibly do you much harm.” The Man, laughing, replied, “Now you shall certainly die by mine own hands, for no evil, whether it be small or large, ought to be tolerated.”

The Father and His Sons

A Father had a family of sons who were perpetually quarreling among themselves. When he failed to heal their disputes by his exhortations, he determined to give them a practical illustration of the evils of disunion; and for this purpose he one day told them to bring him a bundle of sticks. When they had done so, he placed the bundle into the hands of each of them in succession, and ordered them to break it in pieces. They each tried with all their strength, and were not able to do it. After this the Father ordered the bundle to be untied, and gave a single stick to each of his Sons; at the same time bidding him try to break it, which each did with all imaginable ease. He then addressed them in these words: “My sons, if you are of one mind, and unite to assist each other, you will be as this bundle, uninjured by all the attempts of your enemies; but if you are divided among yourselves, you will be broken as easily as these sticks.”