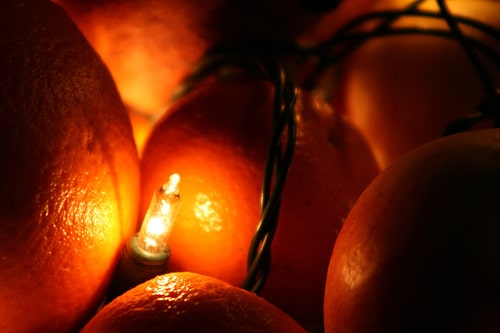 This following essay appeared in the New York Times in 1995. As a young man, I remember it making a deep impression on me for reasons I couldn’t then quite articulate, and I cut it out and have saved it ever since. To a time in which the holidays have often become overly-commercialized and stripped of genuine feeling, this story provides a poignant antidote and needed perspective. Written by Flavius Stan, who was then a 17 year old exchange student from Romania living in NYC, it teaches about sacrifice, love for one’s family, and being grateful for what you have.

The Night of Oranges

It is Christmas Eve in 1989 in Timisoara and the ice is still dirty from the boots of the Romanian revolution. The dictator Nicolae Ceausescu had been deposed a few days before, and on Christmas Day he would be executed by firing squad. I am in the center of the city with my friends, empty now of the crowds that prayed outside the cathedral during the worst of the fighting. My friends and I still hear shots here and there. Our cold hands are gray like the sky above us, and we want to see a movie.

There is a rumor that there will be oranges for sale tonight. Hundreds of people are already waiting in line. We were used to such lines under the former Communist Government-lines for bread, lines for meat, lines for everything. Families would wait much of the day for rationed items. As children, we would take turns for an hour or more, holding our family’s place in line.

But this line is different. There are children in Romania who don’t know what an orange looks like. It is a special treat. Having the chance to eat a single orange will keep a child happy for a week. It will also make him a hero in the eyes of his friends. For the first time, someone is selling oranges by the kilo.

Suddenly I want to do something important: I want to give my brother a big surprise. He is only eight years old, and I want him to celebrate Christmas with lots of oranges at the table. I also want my parents to be proud of me.

So I call home and tell my parents that I’m going to be late. I forget about going to the movie, leave my friends, and join the line.

People aren’t silent, upset, frustrated, as they were before the revolution; they are talking to one another about life, politics, and the new situation in the country.

The oranges are sold out of the back doorway of a food shop. The clerk has gone from anonymity to unexpected importance. As he handles the oranges, he acts like a movie star in front of his fans.

He moves his arms in an exaggerated manner as he tells the other workers where to go and what to do. All I can do is stare at the stack of cardboard boxes, piled higher than me. I have never seen so many oranges in my life.

Finally, it is my turn. It is 8 o’clock, and I have been waiting for six hours. It doesn’t seem like a long time because my mind has been flying from the oranges in front of me to my brother and then back to the oranges. I hand over the money I was going to spend on the movie and watch each orange being thrown into my bag. I try to count them, but I lose their number.

I am drunk with the idea of oranges. I put the bag inside my coat as if I want to absorb their warmth. They aren’t heavy at all, and I feel that this is going to be the best Christmas of my life. I begin thinking of how I am going to present my gift.

I get home and my father opens the door. He is amazed when he sees the oranges, and we decide to hide them until dinner. At dessert that night, I give my brother the present. Everyone is silent. They can’t believe it.

My brother doesn’t touch them. He is afraid even to look at them. Maybe they aren’t real. Maybe they are an illusion, like everything else these days. We have to tell him he can eat them before he has the courage to touch one of the oranges.

I stare at my brother eating the oranges. They are my oranges. My parents are proud of me.