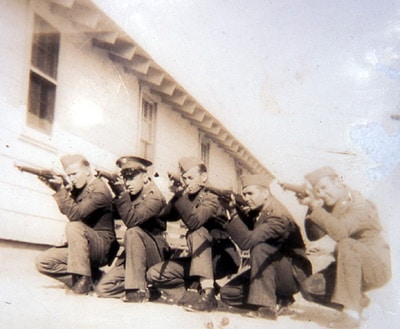 Editor’s note: This is a guest post from Mike Inscho.

If you’ve been a reader of The Art of Manliness for more than a day, you know Brett, Kate, and all of the regular contributors do a fantastic job of searching out and relaying habits of great men to us. Men like Ernest Shackleton, Henry David Thoreau, and Charles Atlas, all set examples that every man can follow.

I haven’t attempted to take 27 men to the South Pole, and, after having my ship become stuck in ice, somehow managed to get them all home alive like Mr. Shackleton. But I am part of a small group (.45% of the total American population) that consistently creates great men and demands that its members be constantly improving.

As an enlisted member of the Army, and now an Officer, I’ve gone through what was essentially two separate stints at basic training. The first as enlisted and the second as an Officer. During the training, it’s difficult to see the lifelong lessons being drilled into you. Now, however, years after finishing, it’s easier to put a finger on those lessons and apply them to everyday life.

When I would travel in high school, my bags were packed with everything that I might need in an encounter. It might get cold…throw in a few hoodies. What about rain? Take the rain jacket. Doing laundry sucks…I’d better take 3 pairs of underwear and socks for every day I’m going to be away just in case. Seven days in the Carolinas required the same amount of baggage as moving to a new house.

Drill Sergeant, in his infinite wisdom, was about to teach me a more efficient way to pack my bags.

One day we were told we were doing a ruck march the next day and were handed a packing list. This packing list was mandatory, and everything on it had to be packed in our ruck sacks or worn on us.

“The stuff on the packing list is more than my ruck sack can hold…how am I supposed to bring the extra gear I might need?!”

After that first ruck march with 10 days worth of gear and change of clothes, my ideas about packing changed drastically.  If it wasn’t 100%, absolutely crucial to my survival, it wasn’t packed.  A uniform, two or three changes of undergarments, a poncho, and some bungee cords were all we used, and therefore, were all we needed. Twelve undershirts is unnecessary when you’re only gone for ten days.  Nobody cares what you smell like and that same space could be used for food or ammunition.

Do you need a walk-in closet full of dress shirts if your job requires a hard hat and a tool belt? Do you need six different methods of making coffee when you end up just stopping by a coffee shop anyways?

Take an inventory of everything you use, and donate or sell everything that hasn’t been useful in the last four months. How do you decide what stays and what goes? Do what I do. Twice a year, turn everything you own backwards. When you look in the dresser drawer, you’ll see the backs of your shirts; in the cabinet you’ll see the back of the peanut butter jar. Then, when you use an item, turn it back around so it’s facing you.  If you don’t use it, leave it alone. After four months, everything that is still facing away from you is donated or sold…no questions asked.

Every morning we did PT, and every PT session included some sort of running. If we were ever on a real world mission and had to get to the objective, we knew we could run to it.

Next, if we weren’t on a live range, we were practicing basic rifle marksmanship drills. We knew that if we ever got into a real world firefight, these techniques would be second nature and give us the ability to protect ourselves and our teammates.

After that we communicated. Radios, written orders, hand and arm signals…eventually our squad got to the point that our communication was almost telepathic.

Our Drill Sergeant constantly reminded us that all we needed to be a successful Soldier was to be able to run, shoot, and communicate. If you can do those well and your squad can do them well, all of the extra stuff is icing on the cake.

What do you need to do to be a successful husband? Provide care, love, and resources to your family. Nothing else should be your focus until these needs are met.

What about a successful bachelor? Grandfather? Boss?

The type of man you want to be can be simplified to a few basic characteristics that, when done successfully, lead you to success. Prioritize your life and focus on the “need to haves” before you even think about the “nice to haves.”

My second round of basic training granted me a bit more freedom and opportunities outside of training. Still, training was the priority, and one day I found myself back on the range to qualify with my weapon.

“I’ve done this a million times. No sweat…BANG! I wonder what they are serving for dinner tonight…BANG! What about the gym…BANG! Are they even open today…BANG!”

On and on that went for all 40 targets. My mind on the mystery meat that would be served later for dinner. It should have been on the mechanics of marksmanship that were drilled into my mind and body during my first round at basic training.

I finished my ammunition and awaited my score. No doubt it’d be a 28/40…or maybe even a 30/40 because I’d done this a million times, remember?

Proficiency does not come from one attempt…not even dozens of attempts. To do something well demands your concentration and for you to practice mindfulness, regardless of how many times you’ve done that task before. If whatever you’re doing isn’t important enough to you to demand your full attention…why do it?

4. Outranking Someone Doesn’t Equal Control of Them

Case in point, during Officers Basic Training, myself and 39 other brand new Second Lieutenants made up a platoon that was “advised” by a group of Staff Sergeants and a Sergeant First Class. From the standpoint of the military’s hierarchy, we were being led by people we outranked.

This wasn’t an issue until our field exercise. At times like that everyone’s temper is much, much shorter than usual and the easy way out tends to become the trail most taken.

After we came back from a tactics exercise in the woods, someone realized that he had lost an important piece of equipment. Not something important to him, or assigned to him, but something very important to the entire platoon and the responsibility of our Sergeant First Class advisor.

The search for it was half-assed on our part, and the Sergeant First Class decided we needed punishment.  Except we outranked him and he couldn’t punish us the way it’s normally done in the Army (mass amounts of push-ups and other exotic, and exhausting, types of physical training).

The one thing he could do to us, was hold us in formation for as long as he pleased and wherever he pleased. It was late June, in southern Georgia, and our base was made up entirely of low tents and gravel. Obviously the best place for him to keep us in formation for the next hour was out in the open as the temperature rose to 100+…and that’s exactly what he did.

If you’re a manager, or a boss, or a leader of any type, you need to realize that your position doesn’t mean your subordinates have to automatically bend to your every desire. They don’t even have to respect you.

You earn the respect you are given.

These four basic life lessons are nowhere near a complete guide to being a man. They are, however, things you commonly see many men pay no attention to. Practice these lessons daily, one at a time until each one is mastered, and I’m willing to bet you’ll see all parts of your life from a new perspective, and find yourself closer to winning the battle that every man fights–whether soldier or civilian–of becoming the man you want to be.

Mike Inscho is an Army Officer and aspiring writer.