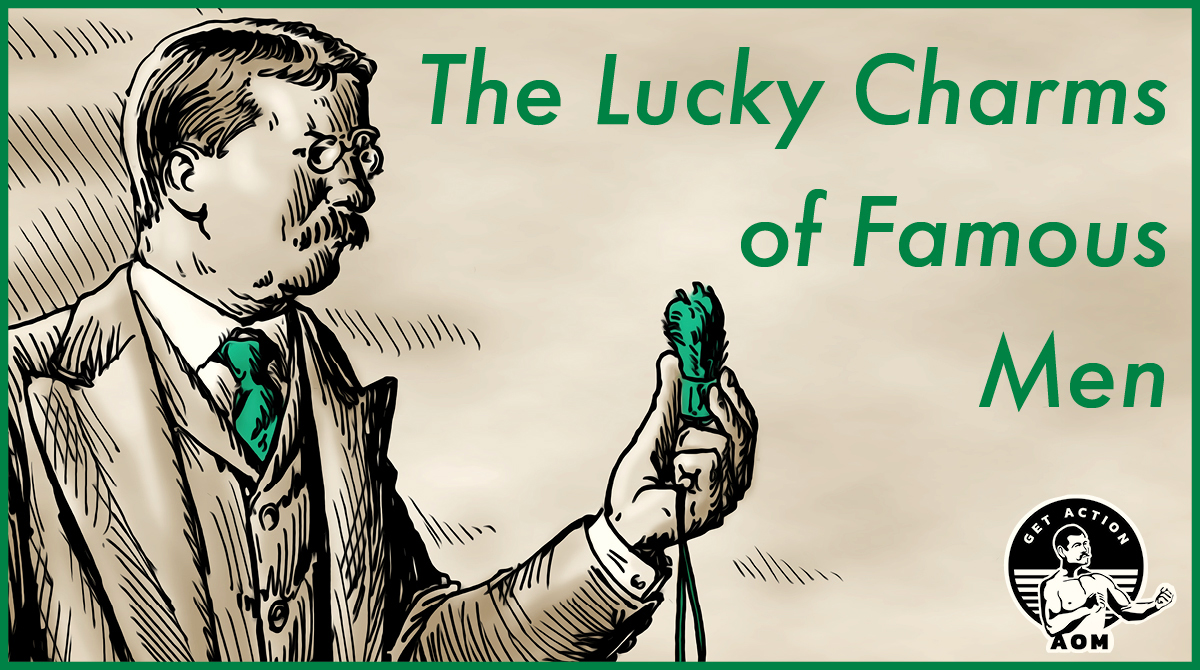 Superstitions — beliefs that are neither directly religious nor logically sound — have surely been around since time immemorial. Humans have always sought to get the edge on the seemingly supernatural forces that govern fate — to ward off bad woo-woo and attract good luck. And while the idea that some cause can influence some entirely unrelated consequence isn’t based on reason, it does have its own sort of rationality: some research shows that superstitions can significantly improve one’s performance, as they do in fact boost your sense of confidence.

Certainly, many of history’s most famous, and otherwise quite level-headed, figures have sworn by the strange efficacy of fortune-courting superstitions, including the use of lucky charms. All kinds of talismans have been carried in pockets, packed in luggage, and tucked into dresser drawers; they’ve accompanied men in high-flying cockpits and civic corridors, earthy trenches and outer space.

Below are a few of these famous figures, and the lucky totems they toted:

When Theodore Roosevelt was inaugurated president for the second time in 1905, he wore a gold ring, which held, under a clear stone, a lock of Abraham Lincoln’s hair. Knowing that TR was a longtime admirer of Honest Abe, John Hay, Roosevelt’s Secretary of State who had once been Lincoln’s private secretary, gave Teddy the ring on the eve of the inauguration as a gift and talisman, telling him, “Please wear it tomorrow; you are one of the men who most thoroughly understands and appreciates Lincoln.” Throughout his life, the ring remained one of Roosevelt’s most prized possessions.

After his presidency and before leaving for a safari expedition, TR was given another totem, this time by his friend and occasional White House guest, heavyweight boxing champion John L. Sullivan. The Boston Strong Boy presented Roosevelt with a gold-mounted rabbit’s foot, of which the former president said, “I carried it through my African trip; and I certainly had good luck.”

Not only was the Sultan of Swat himself surrounded by an air of superstition in the form of the infamous “Curse of the Bambino,” he seems to have been personally superstitious as well.

According to professional baseball player, coach, and manager Eddie Collins, Babe Ruth had “a locker full of charms, fetishes, and tokens,” which included a miniature totem pole which sat on a shelf and a wooden horseshoe, engraved with a four-leaf clover, which was fastened to the door.

Collins, who as a batter had his own eccentric habit of sticking a piece of chewed gum on his hat, and then putting it into his mouth to chomp whenever a pitcher had two strikes on him, said that athletes like him and Ruth didn’t really believe that charms and rituals won them games, but did feel as though “Having them gives confidence.”

The Astronauts of the Apollo 11 Mission

The astronauts of the Apollo missions were each allowed to bring a “personal preference kit” or PPK on their spaceflights. These PPKs were fireproof cloth pouches, a little smaller than an average Dopp kit, into which the men packed mementos like coins, stamps, and miniature flags (which would become valuable collectors’ items upon their return to earth), photos of their families, personal effects — and often, good luck charms as well.

On the Apollo 11 mission, Michael Collins, who flew the lunar command module around the moon while his fellow astronauts landed on its surface, packed a small, hollow lucky bean from India in his PPK. Inside the bean were 50 tiny ivory elephants that a friend planned to give away as gifts when the astronaut returned to Earth.

Inside Buzz Aldrin’s personal preference kit was stashed his mother’s lucky charm bracelet which was inscribed with the names of her children and grandchildren. (As an interesting, little-known aside, contrary to NASA’s prohibitions against bringing alcohol on the spacecraft, Aldrin also smuggled a small vial of wine and chalice in his PPK, and used these items to celebrate Christian communion after landing on the moon, “much as Christopher Columbus and other explorers had done when they first landed in their ‘new world.’”)

The third member of Apollo 11, Neil Armstrong, didn’t pack a lucky charm in his PPK, unless you count a piece of the propeller from the Wright Brothers’ “1903 Flyer,” which he brought along in homage to the pioneers of aviation history, but perhaps as a kind of talisman as well.

Ike always carried what he considered to be three lucky coins in his pocket: an American silver dollar, a British five Guinea gold piece, and a French franc. During WWII, whenever the Supreme Commander was stressed and needing to make a big decision — like when to launch the D-Day invasion — he would reach his hand into his pocket, and finger these coins as he weighed the different sides of the issue.

In A Moveable Feast, which describes his years living in Paris as an expat journalist and fledgling novelist, Hemingway says of himself: “For luck you carried a horse chestnut and a rabbit’s foot in your right pocket. The fur had been worn off the rabbit’s foot long ago and the bones and the sinews were polished by wear. The claws scratched in the lining of your pocket and you knew your luck was still there.”

When Hemingway was a war correspondent during WWII, his son gave him a red stone for a lucky charm, which was then replaced by a champagne cork, for reasons he explained to his friend A.E. Hotchner:

one morning in England when I was scheduled to fly a mission with the RAF, the floor maid at my hotel brought back my pants from the cleaners and I realized that I had left the stone in one of the pockets and the cleaner had thrown it away. The RAF car was already waiting for me downstairs to go to the airfield, and I was really sweating over hitting a mission to Germany without the lucky piece. So I said to the maid, ‘Give me something for a lucky piece—just anything and wish me luck on it and that will do it.’ Well, she didn’t have anything in the pocket of her uniform but she picked up the cork from the bottle of Mumm I had drunk the night before and gave me that. Damn good thing I had it—every plane on that flight got chewed up except ours.

Years later, Hemingway received a tip on a horse race in Paris, and he and his friends decided to place a grand wager on a 27:1 pony that was supposed to unexpectedly have a breakout performance. But when he realized he now couldn’t find his lucky cork to bring to the track, he instructed Hotchner to find a new lucky piece, again using his catholic criteria: “Anything, as long as it’s pocket-sized.” Hotch offered a chestnut that had fallen on his head “where the Champs Elysees comes into the Concorde.” Papa rubbed the nut to the side of his nose to sanctify it, put it in his pocket, and told his young friend, “Never lose your faith in mysticism, boy.”

Be sure to listen to our podcast on the art of creating good luck: