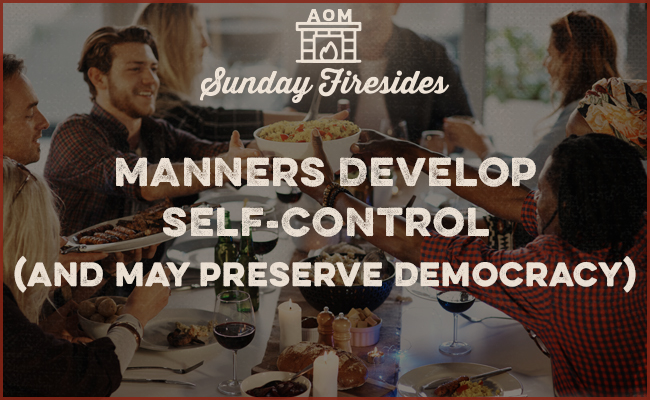 When you take a step back, manners can seem pretty arbitrary and pointless. Sure, some gestures like holding the door open for someone have a clear element of others-oriented consideration. But why do we bring our food to our mouths rather than our mouths to our food, eat chicken tenders with our fingers but chicken breasts with a fork, and need to keep our elbows off the table?

All of these behaviors may simply seem more “civilized,” but why is that? Why did manners develop as part of modern civilization? After all, people in medieval times thought it perfectly fine to eat everything with their hands and burp and fart at the table.

Sociologist Norbert Elias forwarded an interesting hypothesis on this question. He theorized that manners developed in part to support the emergence of democracy.

In a feudal age, serfs were dependent on lords, and the warrior nobility ruled by force. Neither group particularly needed to rein in their inclinations and could afford to be more volatile and impulsive.

The rise of democracy required a people with a different kind of disposition. One that emphasized the ability to exercise foresight and put aside short-term impulses for the sake of long-term prosperity.

Manners developed as a way to create a citizenry with this requisite restraint.

Every time you say “Please,” ask someone to pass you a dish rather than reaching across the table, or keep yourself from interrupting during conversation, you endure an extra beat of delayed gratification. Every time you chew with your mouth closed or dress up for an event, you build a bit more self-discipline.

Manners, then, might best be thought of as daily exercises that strengthen the “muscle” of self-control, and even as preservers of democracy. For a people can only govern themselves, when they can, well, govern themselves.