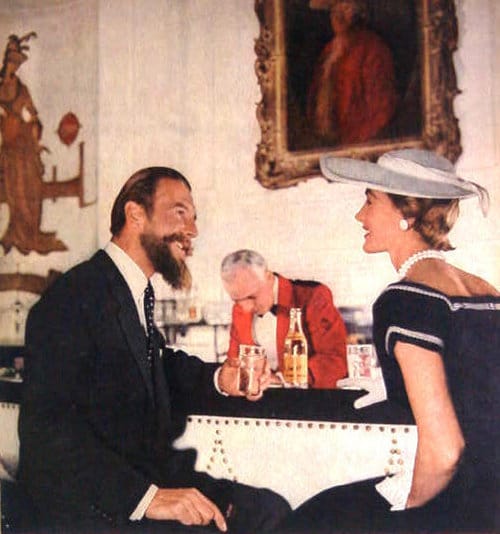 What defines an educated man? The number of degrees he has? The size of his vocabulary? How many books he’s read?

The qualities that constitute an educated man can be argued over and debated. But I was really taken with the description I found in the book How to Live the Good Life by Commander Edward Whitehead (the Schweppes guy!). He said:

Let’s take a look at each of these characteristics.

The Educated Man Can Entertain Himself

Only those who want everything done for them are bored. –Billy Graham

“I’m bored!” is the plaintive cry uttered by many a child idling away their summer vacation or fall break. They expect their parents to come up with an activity to cure this boredom (if your mom was like mine, she would always make a wry suggestion like, “How about cleaning up your room?”).

Unfortunately, many men never outgrow this need to be entertained by others and don’t develop into self-starters. This is the man who puts his head down on the dinner table as people talk after eating (I’ve seen it), the college student who grouses his way through a class outing to the local museum, and the houseguest who comes to visit your fair city and has no idea what he’d like to do during his stay; he leaves all the planning to you.

The reason that children are perennially bored is not that there aren’t entertainment options available — they’re often surrounded by toys and games — but that they have such short attention spans. They play with one thing for a little bit and then another, and then don’t know what else to do. The educated man is able to lose himself in a task, a hobby, a conversation, or a book because he has developed his powers of focus and concentration.

When people are bored, it is primarily with themselves. –Eric Hoffer

Of course these days, with one’s phone always at hand, amusing yourself isn’t very difficult. Anyone can surf or text the boredom away. The real test for the modern educated man is the ability to entertain himself when technology isn’t available or is not socially acceptable to whip out. Can you entertain yourself at a boring meeting, while camping, while conversing at a dinner party? The educated man can, and he does it, ironically enough, by retaining an important ability of his childhood — curiosity. The educated man is insatiably curious about the world around him and other people. In any situation, he sees something to learn, study, and observe. If he’s stuck somewhere with neither phone nor company, he uses the time to untangle a philosophical problem he’s been wrestling with; the mind of the educated man is a repository of ideas that he can pull out and examine to pass the time in any situation.

The Educated Man Can Entertain a Friend

If someone is of the dull, non-self-starting kind, lucky is he to have a friend who is an educated man to entertain him!

The educated man is the life of the party, the man who keeps the conversation lively and is known to be unfailingly engaging.

He is able to do this because of the breadth of his reading and his experiences. He has an arsenal of interesting tales at the ready about his travels and endeavors. And he’s up on the latest news stories and interesting scientific breakthroughs. No matter the demographics of the group he’s with, he knows a story that will appeal to them.

Abraham Lincoln is a good example of an educated man who could entertain others. Though Lincoln only had one year of formal education, he read voraciously and dedicated himself to lifelong learning. The result was the ability to talk to anybody about anything and leave them entertained. Adeline Judd, the wife of Illinois Congressman Norman Judd, recounted an experience of being entertained one evening by the musings of Abe Lincoln:

Mr. Lincoln, whose home was far inland from the Great Lakes, seemed stirred by the wondrous beauty of the scene and by its very impressiveness was carried away from all thoughts of the earth. In that high-pitched but smooth-toned voice he began to speak of the mystery which for ages enshrouded and shut out those distant worlds above us from our own; of the poetry and beauty which was seen and felt by seers of old when they contemplated Orion and Arcturus as they wheeled seemingly around the earth in their mighty course; of the discoveries since the invention of the telescope which had thrown a flood of light and knowledge on what before was incomprehensible and mysterious; of the wonderful computations of scientists who had measured the miles of seemingly endless space which separated the planets in our solar system from our central sun and our sun from other suns which were now gemming the heavens above us with their resplendent beauty.

When the night air became too chilly to remain longer on the piazza, we went into the parlor where, seated on the sofa his long limbs stretching across the carpet and his arms folded about him, Mr. Lincoln went on to speak of the discoveries and inventions which had been made during the long lapse of time between the present and those early days when man began to make use of the material things about him. He speculated upon the possibilities of the knowledge which an increased power of the lens would give in the years to come, and then the wonderful discoveries of late centuries, as proving that beings endowed with such capabilities as man must be immortal and created for some high and noble end by Him who had spoken these numberless worlds into existence.

We were all indescribably impressed by Mr. Lincoln’s conversation. After he had gone Mr. Judd remarked: ‘The more I see of Mr. Lincoln the more I am surprised at the range of his attainments and the wonderful store of knowledge he has acquired in the various departments of science and learning during the years of his constant labor at the bar. A professor at Yale could not have been more entertaining and instructive.’

Of course among the many subjects the educated man has studied is that of human behavior and psychology, so he knows that people are most charmed when others seem interested in them. Here Lincoln also excelled; as one of his biographers noted, “Like all truly great men he was a good listener.”

While we’re on the subject, I’d also add that a man should be able to tell a good joke. I guess it’s gone out of fashion to tell real jokes, but I still enjoy them.

The Educated Man Can Entertain a New Idea

Well recent research into the way our minds work has shown that far from being the rational beings we flatter ourselves into believing we are, unbeknownst to us, our unconscious is constantly shaping our thoughts, beliefs, and motivations in irrational ways. For example, because of “the backfire effect,” when we’re presented with evidence that contradicts our beliefs, instead of changing those beliefs, they become even more entrenched. The “confirmation bias” makes us seek out and only pay attention to new information that confirms our preexisting notions, while we let information that contradicts those notions go over our heads. And “the sunk-cost fallacy” pushes us to stick with a less sensible or desirable option instead of choosing something better, because we’ve already invested time, money, or emotion in it.

In other words, our unconscious minds see our personal ideas as a great treasure, and competing ideas as would-be looters; when they’re detected by the unconscious’ security system, it unleashes the dogs and locks the gate. If you look at a brain scan of people who are listening to a political argument that contradicts their own position, the blood in the part of the brain responsible for rational thought is depleted and is not replenished until the person hears a statement that confirms their position. When confronted with new ideas, your brain literally closes up shop and throws down the blinds until a friendly and well-known visitor knocks at the door.

All of which is to say, the ability to entertain new ideas does not come naturally. Your conscious mind has to turn off the unconscious’ security system and say, “Okay, I know what’s going on here. Let’s not be so hasty. I’m not sure if that’s a looter or a new friend. Why don’t we first check and see?”

Entertaining a new idea doesn’t necessarily mean accepting it and changing your beliefs every time you’re presented with a different take on things. As it has been said, “Be opened-minded, but not so open-minded that your brain falls out.”

Rather, you should entertain an idea in the same way you entertain a guest. You talk with him in a public setting first, at a distance. If you’re intrigued, you then invite him over for a chat. You spend some time getting to know him. And if he turns out to be a bad apple, you stop letting him come around. But sometimes, the person you didn’t think you had anything in common with becomes your new best friend.

The educated man has an easier time in seeing this. His varied experiences and studies have given him multiple opportunities to see how the information he has learned has changed his opinions — even if it took those new ideas a long time to be invited in. The sheltered man who only interacts with people just like him and only reads things that confirm his preconceived ideas will not have these experiences to draw upon, and will thus greet all new ideas like menacing strangers, shaking his fist at them from the safety of the other side of his crocodile-infested moat.