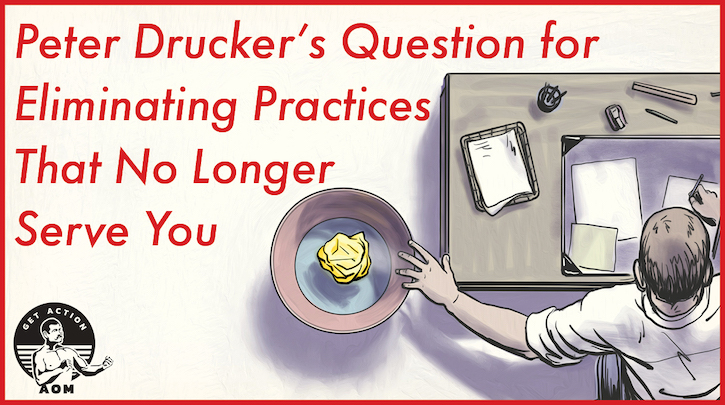 We’ve talked before about the power of using the principle of via negativa to improve your life. Instead of focusing on what you should start doing to make your life better, it often pays to think about what you can stop doing. It’s addition by subtraction.

But there are other habits, behaviors, and practices that aren’t wholly terrible, but might be holding you back nonetheless.

How do you figure out if you should eliminate these things from your life?

Sloughing Off the Past

According to Drucker, one of the things that most holds organizations back are its previously-made choices.

“Executives, whether they like it or not, are forever bailing out the past,” he writes. “Yesterday’s actions and decisions, no matter how courageous or wise they may have been, inevitably become today’s problems, crises, and stupidities.”

We typically make decisions based on doing the right thing, for right now. That’s often the best we can do. As Drucker notes, “man . . . cannot foresee the future,” and it’s difficult to impossible to know if a solution that fits the current moment, will also fit the circumstances a year or five down the line. You just have to move forward on the information you have.

But while there’s nothing wrong with making decisions based on what best serves our immediate needs, the problem, Drucker says, is that organizations and individuals often continue in servitude to these decisions, even when they stop providing significant ROI.

Thus, one of the main jobs of an effective executive is to continually “slough off the past that has ceased to be productive.”

To that end, Drucker recommends that executives routinely take part in “systematic abandonment.” Every few months, an executive should do a reevaluation of all the organization’s practices, looking at everything the organization is doing and deciding anew if the organization should stop or continue it.

In later articles, Drucker recommends that individuals engage in systematic abandonment to improve and keep their individual lives running at full speed as well.

Drucker notes that getting rid of failures is easy. “They liquidate themselves,” he writes.

The insidious stuff to slough off are the things that served us well in the past but will hold us back in moving forward in the future.

So how do you identify this dross and avoid continuing once-productive, now-potentially-burdensome successes?

Drucker offers a question that acts as a metaphorical machete:

“If we did not already do this, would we go into it now?”

If you can’t answer this question with an unconditional yes, Drucker advises immediately eliminating that practice.

Drucker’s question can of course help you trim away low-ROI-producing fat from your business. Maybe you started offering a certain service to your customers five years ago. It made sense at the time; there was plenty of demand for it, and for the next three years after its introduction, it brought in plenty of profit. But for the last couple of years, both demand for and the profit margin on that service have fallen, while the amount of effort it requires, and the headaches it produces, have stayed the same. If you ask yourself if you would introduce this service now if you weren’t already doing it, you’ll likely say no. So get rid of it! In so doing, you open up bandwidth to invest more in your other offerings, or to come up with something new that meets the needs of the current moment in time.

Drucker’s question can be applied to things like holiday traditions as well.

In the extended McKay family, the Fourth of July is the biggest holiday of the year, and starting when I was a kid, my family would kick off the celebration by going to my hometown’s Independence Day parade. The annual tradition continued even when my siblings and I left home, moved away from Edmond, Oklahoma, and started our own families. Every year we’d return home to celebrate the Fourth together, and every year we started the day by attending the parade, because that’s what we’d always done and it had been fun . . . at least in the early years.

But over time, the event started to feel like a drag. My brother-in-law would have to camp out along the parade route to secure a viewing spot for the entire McKay clan. To make it to Edmond in time for the parade, my contingent of McKays would have to leave Tulsa really early, which made us tired for the rest of the day. And the parade was increasingly boring; it lasted for hours, hadn’t changed much in years, and was made up of floats that were all basically advertisements for local businesses.

Eventually, though we didn’t have Drucker’s exact words with which to articulate the question, we asked ourselves whether we were going to the parade because we really wanted to, or out of some kind of autopilot sense of obligation to the past.

The answer was the latter, and so the parade tradition was jettisoned.

And the McKays’ Fourth of Julys have only improved. By not starting the day on a draining note, we’re in better spirits for the rest of the activities we participate in that day.

It’s not that Fourth of July parades were the wrong thing for my family to do back in 1991. It’s that they weren’t the right thing for the McKays to do in 2021.

Finally, Drucker’s question can be put to use in evaluating your individual habits, too.

Take journaling, for example. I used to be a regular journaler. Early in my life, I got a lot of value out of it. But then I reached the point where I stopped getting much benefit from the practice. Asking myself, “If I wasn’t already journaling, would I start now?” helped me figure out whether I should continue or stop the practice. Since the answer wasn’t an unconditional yes, I stopped journaling. I haven’t missed it.

Whether in your professional or personal life, Drucker’s question will help you figure out if you’re just wedded to a process out of custom/routine or if it’s actually bringing you value. Regularly look over all your systems, practices, and habits, and ask yourself: “If I didn’t already do this, would I start doing it now?”

If you can’t answer with a “Heck yeah!” then cut the practice out of your life.