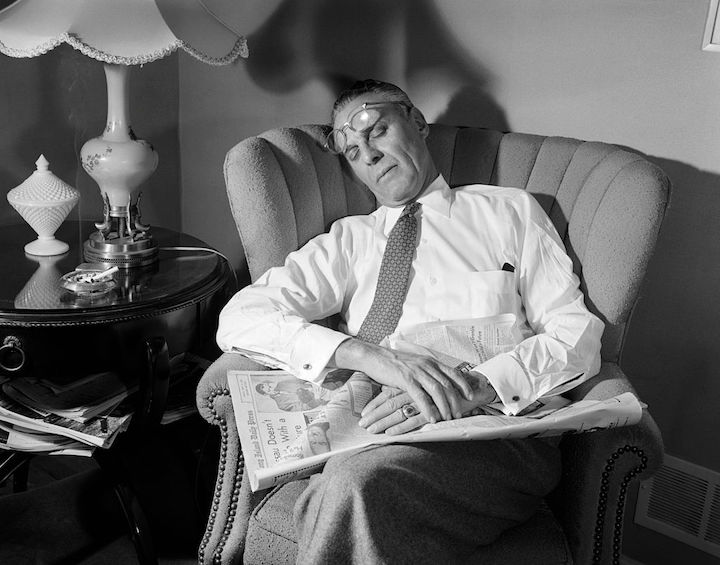 Editor’s note: Erich Fromm was a German sociologist and psychologist of the 20th century. His most famous work, Escape From Freedom, examined a most interesting paradox: while human beings long for freedom, when they get it, they often experience it as disorienting and anxiety-producing — something to flee from, rather than embrace. Given the time the book was written, 1941, Fromm was unsurprisingly interested in the way many of his fellow Germans had not only tolerated the Nazis’ rise to power, but eagerly welcomed it as a chance to submit themselves to an authoritarian regime that would structure their lives and tell them what to do. But he described a similar, if less extreme, impulse in his adopted homeland of the United States as well. Americans, Fromm argued, were too willing to surrender their personal freedom to cultural conformity — to alleviate the burden of being an individual by losing the self in the dictates of society.

Below you’ll find a particularly good quote from Escape From Freedom on some of the circumstances that can make resisting this conformity and thinking critically and originally so difficult in the modern age.

In addition to the factors just mentioned there are others which actively tend to confuse whatever is left of the capacity for original thinking in the average adult. With regard to all basic questions of individual and social life, with regard to psychological, economic, political, and moral problems, a great sector of our culture has just one function—to befog the issues. One kind of smokescreen is the assertion that the problems are too complicated for the average individual to grasp. On the contrary it would seem that many of the basic issues of individual and social life are very simple, so simple, in fact, that everyone should be expected to understand them. To let them appear to be so enormously complicated that only a “specialist” can understand them, and he only in his own limited field, actually—and often intentionally—tends to discourage people from trusting their own capacity to think about those problems that really matter. The individual feels helplessly caught in a chaotic mass of data and with pathetic patience waits until the specialists have found out what to do and where to go.

The result of this kind of influence is twofold: one is a skepticism and cynicism towards everything which is said or printed, while the other is a childish belief in anything that a person is told with authority. This combination of cynicism and naïveté is very typical of the modern individual. Its essential result is to discourage him from doing his own thinking and deciding.

Another way of paralyzing the ability to think critically is the destruction of any kind of structuralized picture of the world. Facts lose the specific quality which they can have only as parts of a structuralized whole and retain merely an abstract, quantitative meaning; each fact is just another fact and all that matters is whether we know more or less. Radio, moving pictures, and newspapers have a devastating effect on this score. The announcement of the bombing of a city and the death of hundreds of people is shamelessly followed or interrupted by an advertisement for soap or wine. The same speaker with the same suggestive, ingratiating, and authoritative voice, which he has just used to impress you with the seriousness of the political situation, impresses now upon his audience the merit of the particular brand of soap which pays for the news broadcast. Newsreels let pictures of torpedoed ships be followed by those of a fashion show. Newspapers tell us the trite thoughts or breakfast habits of a debutante with the same space and seriousness they use for reporting events of scientific or artistic importance. Because of all this we cease to be genuinely related to what we hear. We cease to be excited, our emotions and our critical judgment become hampered, and eventually our attitude to what is going on in the world assumes a quality of flatness and indifference. . . . life loses all structure; it is composed of many little pieces, each separate from the other and lacking any sense as a whole. The individual is left alone with these pieces like a child with a puzzle; the difference, however, is that the child knows what a house is and therefore can recognize the parts of the house in the little pieces he is playing with, whereas the adult does not see the meaning of the “whole,” the pieces of which come into his hands. He is bewildered and afraid and just goes on gazing at his little meaningless pieces.