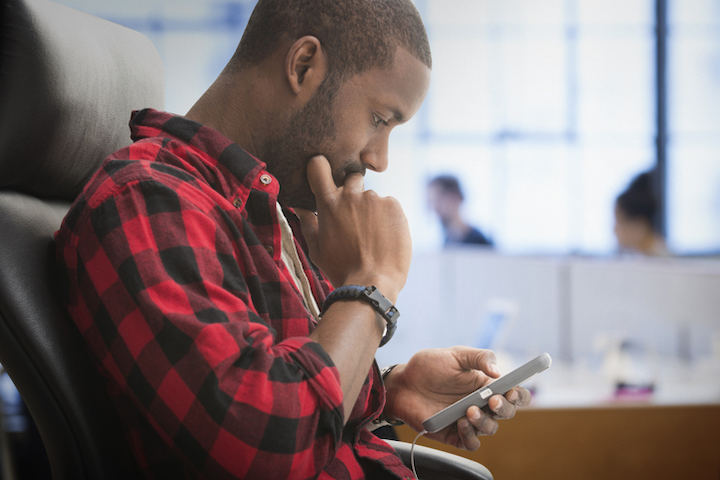 The tough thing about communication technologies is that they typically become widespread and ubiquitous before society informally codifies a set of agreed-upon norms around their use.

Such is the case with texting. Even though it’s been around for a couple decades now, folks still have varying opinions as to what texting behaviors are appropriate and polite. One area in which people have particularly divergent perspectives is how long it should take someone to respond to a text.

People generally fall into two camps here: The first responds to the texts they receive pretty promptly, and expects others to do the same. The second might not respond to a text for a day, or several, and doesn’t mind if people respond to the texts they send out in a similarly leisurely fashion.

When an individual in the first camp is in regular correspondence with a member of the second, conflict can ensue. When the former doesn’t receive a response from the latter in what they consider a timely manner, they can feel worried that they’ve said something wrong, frustrated that they’re not able to move forward on a decision pending an answer to a question, and even resentful or slighted, interpreting the lack of response to their message as a signal from its recipient that they, themselves, are unimportant. The slow responder, meanwhile, is probably completely unaware that they’ve created a sense of angst in the other person.

Neither camp is “wrong”; remember, there’s no agreed-upon norms that the second camp is violating, and that the first camp ought to be enforcing. Folks are just doing what feels normal for them in their brains.

But to avoid the tension and misunderstandings — what digital communications expert Erica Dhawan calls “timing anxiety” — that can arise when members of these divergent camps text, asynchronously, past one another, it behooves both to try to meet each other halfway.

If It Takes You Awhile to Respond to People’s Texts:

Make an effort to respond more promptly. In Digital Body Language, Dhawan says that the general expectation around text messages is that they’ll be answered within an hour. The data says that the average text message is responded to in 90 seconds, and according to one study which polled folks 18-65, taking more than 20 minutes to respond is considered rude.

These are just averages, of course. But if you’re someone who typically takes hours to days to reply to people’s texts, know that you’re likely ruffling at least some people’s feathers.

You probably don’t want friends and loved ones to feel frustrated or slighted, so do what you can to manage people’s timing anxiety by being better about promptly responding to the texts you receive. Dhawan suggests this rule of thumb: “If you can answer in 60 seconds or less, respond immediately.” (This philosophy in fact works well for most anything; if there’s an action item on something that you can take care of in less than a minute, Do It Now!)

Even if someone’s message can’t be responded to in 60 seconds, if it concerns an urgent question, or includes a vulnerable disclosure, do your best to respond as quickly as you can; no one likes to be left hanging in such circumstances.

Turn off the automatic read receipt function. Messages sent between Apple phones have a “read receipt” function that shows people exactly when you read the text they sent. But this can create expectations that end up inflating someone’s feelings of hurt or frustration. That is, because the sender knows you’ve read their message, taking a long time to respond may irk them all the more. You may have quickly read their message at a red light, and aren’t going to be able to respond until you complete the rest of a long drive home. Or you glanced at it during a meeting, and can’t reply until it’s over. But of course the other person is unaware of these circumstances and can be thinking: “I know you saw my message! Why aren’t you answering me!?”

To better manage response time expectations, make sure the “read receipt” function on your phone is turned off. You may think yours is, but it sometimes seems to mysteriously come back on, and folks don’t know it’s showing until a friend clues them in.

But give people your own read receipt. If someone has sent you a message, and circumstances or the need to think about about their comment/look more into their question, will prevent you from responding within a reasonable time frame (within the day for general messages; within several hours for more urgent ones), rather than waiting until you can give a full response to make any response, Dhawan recommends shooting them an initial short reply — a sort of personal “read receipt” that acknowledges you got their message: “I’m about to get on a plane, but I’ll let you know tonight!” “That’s a really interesting question. Let me think about it a little more and I’ll get back to you tomorrow.” “I’m on it! I’ll have something to show you Friday.” What could be a recipe for resentment (“Why haven’t they responded to me?!”), becomes a flattering gesture (“How nice that they cared enough to think about my question.”) If you need to, put a reminder on your calendar that you need to circle back to so-and-so’s text. iPhones also give you the option of pinning a chosen conversation to the top of your Messages app, so it doesn’t get pushed down and subsequently lost in your text inbox.

If You Expect Your Texts to Be Responded to Quickly:

Assume good intent. If you’re in the camp that expects to have their texts responded to quickly, and gets ticked when people are slow to reply, try to be more patient, assume good intent, and give other people grace. Don’t take absent or delayed responses personally.

First off, countenance the fact that people can be/get busy. Someone may simply have a lot going on, are feeling overwhelmed, and are having trouble keeping up with their communications. Their slow texting may also be a philosophical choice: perhaps they’re pushing back against the expectation of constant connectivity and don’t like the way continually responding to texts throughout the day fragments their attention; some people prefer to do their responses in batches at times they intentionally set aside for the purpose.

Second, sometimes people just forget to reply. Other people’s brains aren’t always wired like yours; while the “open loop” of your unresponded-to message keeps popping up in your brain, for other people, the fact that they’ve neglected to respond has completely escaped their mind (just as other details of their life escape their minds in equal measure). Don’t make assumptions (“They’re a bad person”), or spin stories (“They’re mad at me”), about why they haven’t responded. It’s unlikely they’re intentionally ignoring you; they don’t even realize they’ve forgotten to reply. In fact, they may have forgotten not because they don’t think your message is important, but, ironically, because they do. As a client of Dhawan said, “Sometimes I don’t answer because I don’t have time to give the response I think is deserved, so I put it off until later. Then I forget, and [the other person thinks] that I didn’t care enough to respond, when, in fact, I cared too much.”

Recognize too that this difference in how well you and someone else respectively remember to answer texts comes down to a difference in personality, not morality. While you might think your steely memory is a mark of superiority, there’s a good chance it also comes with greater general neuroticism, while your forgetful friend tends to be more buoyant (and that easy-going-ness is likely a big reason you like them in the first place); remember that when it comes to personalities, there are always two sides of the coin.

Only follow up when you really need to. Going along with the above point, only send a follow-up to an unanswered question if you urgently need a reply. As just mentioned, people may not have responded because they’re busy. Even when someone likes you, sending a second text — “Could you please let me know?!” — will read as naggy. Give someone ample time to respond, and only follow up when you’re up against a hard deadline in needing an answer. “Hey, sorry to bother you again, but have you made a decision about which room you want to hold the meeting in? I’ve got to put in a reservation by noon today.”

If the person doesn’t respond to your follow-up, it may be that rare occasion when they are intentionally ghosting you. Unless you have strong reason to doubt that’s true, cease from trying to reach out. The ball’s in their court now.

Consider switching to an old fashioned medium — an actual phone call. A lot of folks in the Millennial-on-down generations have a near phobia of using a phone, as a phone. But if you’ve got a friend or partner who isn’t good about answering texts, consider dialing them up instead of texting, at least if you’ve got an urgent question. They may actually appreciate the change in medium, and the timing anxiety between you will go down, while your healthy communication will go up.

If the slow and fast text responders of the world will each try to meet each other halfway in their different approaches to digital communication, there’s a good chance a nice compromise in this disputed territory can be reached. Which is basically the way all shared norms end up getting codified into the annals of etiquette.

For more tips on how to improve your “digital body language,” listen to our interview with Erica Dhawan: