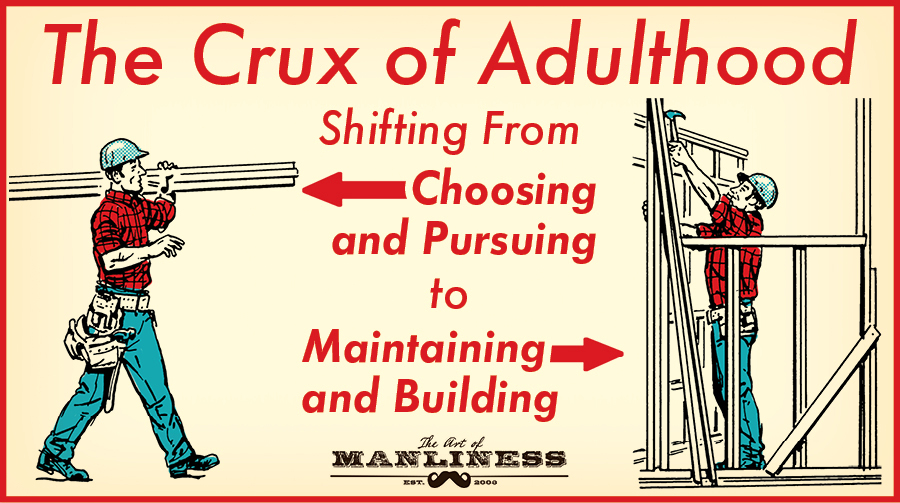 We have a small lot of woodsy land behind our house, and a few years ago I decided to make a trail through it, leading to a “secret” fire pit.

Blazing the trail was a lot of work — there were weeds to pull, thorny bushes to trim, and small trees to uproot. Then there was the task of hauling bags of mulch up and down the small hill the trail traversed, and covering the path with their contents. I kind of enjoyed the process though. It was fun to watch the trail take shape, and when it was done, boy, was I proud. It felt great to step back and see this thing I had made.

Yes, blazing the trail was pretty fun. Maintaining it, though, well, that’s been another story.

Turns out with trails you can’t just “fix it and forget it.” Each spring, prickly, dense vegetation explodes, entangling itself over the path to the extent that you practically can’t see it anymore. Every year it has to be cleared away once again. And I find it’s a lot harder to get motivated to do that job, than it was to make the trail in the first place. Upkeep is just a lot less sexy than creation. Still, I’ve got to keep at it if I want our family to be able to access the fire pit.

The Art of Manliness has always aimed to be a magazine about helping men grow up well, and we have consequently spent a lot of time researching, writing, and thinking about not only what it means to be mature, but how to make adulthood a fulfilling endeavor.

I used to think that the key shift to be made when growing up was moving from consuming to creating: a mature adult aimed to create more and consume less. I still think there’s a lot to that idea.

But as I’ve gotten a little longer in the tooth, I’ve come to feel that the real crux of becoming an adult can even more accurately be captured this way: moving from choosing and pursuing to maintaining and building.

When you’re young, you’re staring down a hallway of unopened doors, unsure of what lies behind each.

You’ve got a lot of choices to make, and the uncertainty surrounding them can be a source of anxiety and worry. But, also, a whole lot of excitement.

Uncertainty has a paradoxical effect on the brain in which it causes both stress and the release of feel-good, motivation-heightening dopamine. Think about how much more often you check your phone when you’re waiting for a text from your crush, versus waiting for a text from someone you’ve been together with for a long time. Uncertainty is what drives you to keep pulling the arm of life’s metaphorical slot machine to see what comes up.

Even as you start opening the various doors before you, and move from the realm of sheer possibility to experimenting with certain choices, the level of excitement and motivation you experience stays high because these initial forays are full of novelty — another dopamine primer. How wonderful is it when things are shiny and new? We speak about the “honeymoon period” in regards to romantic relationships, but every endeavor begins with that same giddiness-inducing phase. New friendships, new place to live, new job — everything’s a bit thrilling at the start.

It’s the thrill of pursuit. In the gap between initiation and consummation, there is a compelling tension, an enlivening drama that’s downright intoxicating. Perhaps no scenario better encapsulates this feeling then the tension right before a first kiss — the electricity generated in the will-we-or-won’t-we dance.

That tension dissipates a bit once the kissing commences (though when it’s a first kiss the novelty of it keeps the excitement level high). But even though the spark is discharged, the fun isn’t over; that little moment of pursuit and consummation is embedded within a broader, longer courtship cycle that itself is structured by the same dynamic. Still to come will be more phases of pursuit-tension-consummation as the couple takes their first steps into love, marriage, sex, and so on.

This dynamic of following a trail of exciting new moments through the woods of some exciting new endeavor play out the same way whether it’s a new romantic relationship, a new friendship, a move to a new place, or a new job.

In every case, though, all the “firsts” are eventually consummated. The overarching goal is achieved. The new becomes routine. And as you get older, this happens not only in one area, but along all the major avenues of life. You reach a point where you’ve opened all the doors and seen the contents of each once mysterious room: You know where you went to college and what you majored in. You know what you’re doing for work. You know where you’ll be living, at least for the foreseeable future. You mostly know what you believe. You know who your wife is (she’s sitting right across from you right now). You know what your kids are like (they’re asleep upstairs).

While life can always shift and change, new possibilities can always emerge, and unknowns always remain, the biggest uncertainties are now pretty certain.

You reach a point where you look around and realize: “This is my life.”

Once you consummate your goals, dopamine, and instinctual motivation, plummet.

Think about the build-up to much-desired sex — the frantic drive and lead-up to orgasm . . . and then the flatness that follows. Then juxtapose that dynamic on the longer-term pursuits in life, and there you essentially have the transition from youth to adulthood.

That sounds kind of depressing perhaps. And indeed, some people just can’t get over the excitement and novelty that marked their younger years. They want that pre-first-kiss tension back, writ large. Once a relationship, job, or other endeavor loses its shiny newness, they start over again with another relationship, another job, another aim (which they’re sure, this time, will be their enduring passion).

These folks get the benefit of ever replenishing the spark of electricity that marks the beginning of something new, but not the satisfactions attendant to seeing it through. They start projects, but don’t finish them; they dabble in things, but don’t stick with them. As a result, all the areas of their life remain in a shallow and superficial state. They have lovers but not partners. They have acquaintances but not best friends. They’ve got a new faith or spirituality every year. They know a little about a lot of places, but have never put down roots in any. They remain on the lower rungs of their career path, as workers, but not professionals.

Fortunately, this isn’t the only way to deal with the fall off in excitement that follows the making of life’s major choices. Instead of constantly starting over again, you can shift to maintaining and building what you’ve already begun.

You can decide it matters less how many choices you have, and more what you do with the ones you’ve already made.

The shift from choosing and pursuing to maintaining and building takes more work, but it doesn’t mean giving up on experiencing zest and satisfaction; rather, it’s a matter of changing the fuel your pleasure system runs on.

So you know who’s going to be your wife. How can you be a better husband to her?

You know where you’re going to live. How can you learn to really love that place?

You know who your kids are. How can you be a better father to them?

You’re pretty solid in your faith. How can you be a better disciple of it?

You know what you’re going to do for work. How can you get better in your job?

You’ve “won” a new buddy. How can you become a better friend to him?

The process of building on what you’ve begun isn’t as sexy and doesn’t come with the automatic, visceral, neurotransmitter-driven motivation and rewards that accompany the pursuit of something new. Instead, the drive to maintain and improve life’s existing structures and the feeling of satisfaction in one’s efforts must be intentionally chosen and actively contemplated.

Once you’ve kindled life’s fledgling flames, the challenge becomes keeping them burning. And carrying them forward.

What’s great about adulthood is that in finally getting centered with a lot of things in life, you can reach for more and more mastery with them. This isn’t just advantageous to you, but also allows you to become a mentor to others — to move into a generative phase in life where you’re able to make a real contribution to the world around you.

Even though I think the major crux of moving from youth and immaturity (regardless of age) to a fulfilling, mature adulthood is shifting from running on the pleasures of pursuit to running on the satisfactions of construction, I don’t think you should ever entirely cease from engaging with the former.

The endeavor of maintenance and improvement isn’t completely devoid of tension and drama. Even when you commit to certain people and certain things, your relationship with them, your ardency for the commitment, waxes and wanes; you go through smoother and rougher seasons, times when you’re closer to someone and more distant. Commitment is rarely a one-time deal, but something you choose over and over again.

This ebb and flow is natural, and maybe even desirable; a fulfilling life needs a little tension and drama — an endlessly placid flow would grow boring.

But if a rough patch persists, it’s time for a reevaluation.

That doesn’t mean automatically following the temptation to chuck it, and start all over again. Sometimes you just need to tweak the way you’re doing things.

If you really give something everything you’ve got, but it still doesn’t work, it might then be time to try something new — a new job, a new location, a new belief system. Adulthood is largely about maintaining and building what is, but that doesn’t mean entirely giving up on new possibilities for what could be.

That goes not only for changing course on one’s existing commitments, but being open to new ones altogether — new friends, new hobbies, new travels, new adventures of all kinds. In improving on what you have, while reaching for fresh frontiers, you ever maintain the zeal of youth, no matter your age. As Bruce Barton once put it:

“The minute a man ceases to grow—no matter what his years—that minute he begins to be old. As long as he can look back on every year and say, ‘I grew,’ he is still young. The minute he ceases to grow, the day he says to himself, ‘I know all that I need to know’—that day youth stops. He may be twenty-five or seventy-five, it makes no difference. On that day he begins to be old.”

On the path of adulthood, blessed are not only the trail blazers, but the trail tenders.