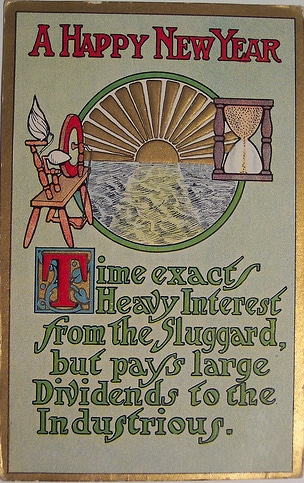 Today is New Year’s Eve. Like most people in the world, I’m taking time to reflect on how the past year went, while also gazing ahead to the new one that awaits. Every year, I set goals or “resolutions” on how to be a better man. I succeed with some but fail in others. Many people become jaded with New Year’s resolutions because they often go un-achieved. Some people are just complacent with themselves. I read today that one individual wasn’t planning on setting New Year’s resolutions because, well, he likes the way he is and doesn’t want to change.

I like myself plenty, but I know there are areas where I can improve my life.

I’ve read plenty of self-improvement books on how to set goals. I’m sure you all have, too. They all pretty much say the same thing: Set specific goals, make sure your goals are measurable, set goals that stretch you, etc. That’s all fine, but setting goals is the easy part. How do we actually achieve them? Most books will tell us that we need to post our goals somewhere that we can see them all the time, repeat them everyday, or make some lame “vision board” so you can visualize your goal. Somehow that’s going to help us achieve our dreams.

I’ve been skipping the regurgitated fluff by self-help gurus and instead seeking advice on how to be a better man and achieve my goals from history’s greatest men. How did I get the advice of history’s great men? I read their biographies. Here’s what I’ve learned from them on how to succeed at your goals.

Establish a system. As a young man, Benjamin Franklin set the audacious goal of “achieving moral perfection.” Franklin set mini-goals to live one of 13 virtues as perfectly as he could each week. In order to achieve his goal of moral perfection, he established a system that helped him keep track of how he was doing in his progress to moral perfection. His system consisted of 13 small charts which contained a column for each day of the week and 13 rows marked with the first letter of his 13 virtues. Franklin evaluated himself at the end of each day. He placed a dot next to each virtue he had violated. The goal was to minimize the number of marks, thus indicating a “clean” life free of vice. With just a glance, Franklin could see how he was doing on his goals.

While Franklin never achieved moral perfection, he didn’t think the project was a waste because he was definitely a better man after he was done.

We can apply the same principle Franklin utilized by establishing a system to help us keep track of our progress. If your goal is to lose 40 lbs this year, create daily mini-goals like Franklin did with his virtues, and make a mark when you don’t achieve those daily goals. A mini-g0al for losing 40 pounds could be exercising every day or not eating junk food during the week. If you slip up on those goals, make a mark for that day. The goal is to have fewer and fewer marks.

Create a daily regimen and stick to it. How many of us get up each day not knowing what in the heck we’re going to do with our time? What usually happens? We get a few things done, but then we waste the rest of our time surfing the web or watching TV. Great men from history ALWAYS knew what they were going to do each day because they had a daily routine and stuck to it like clockwork. Throughout his life, Teddy Roosevelt maintained a rigid daily routine; a habit he picked up from his father. He set aside specific time each day for study, exercise, and work. Ben Franklin shared his daily schedule with us in his biography.

In a letter to his son, George Washington laid out a daily routine for the young man to follow every day of the week, giving the exact time he should spend with each activity. Washington ended his letter by saying:

Time disposed of in this manner, makes ample provision for exercise and every useful, or necessary recreation, and at the same time that the hours allotted for study, if really applied to it, instead of running up and down stairs, and wasted in conversation with any one who will talk with you, will enable you to make considerable progress in whatsoever line is marked out for you.

Create a daily regimen for yourself. Download this weekly calendar, sit down, and plan for the coming week. Block out time for all the activities you must accomplish during the week. This could also be done in Outlook or some other computer time management software, but I prefer paper and pencil. I always begin by blocking off time for the most important items. For me that’s scheduling time for exercise, time with my wife, and time for personal meditation. If you’re balancing several projects at work or school, block off specific time each day in which you’ll work on a different project. You might not finish the project in the allotted time, but that’s not the point. The goal is to just work on it instead of goofing off.

Of course, you should always look over the next day’s schedule each night and make changes depending on changing circumstances. If you can establish a daily regimen for yourself like these great men, you’ll be well on your way to success.

Develop your willpower and discipline. The reason why most people fail to achieve their goals is because they lack the willpower or discipline to do so. But history’s greatest men had wills of iron that gave them the fortitude to achieve success even when things were against them. Alexander the Great displayed amazing resolution when he conquered the heavily fortressed island of Tyre. Ghandi showcased an iron clad will with his gruelingly long fasts in protest to the British government. History is full of men, who through pure willpower, were able to accomplish great things.

A man cannot develop an iron will overnight. It takes months, even years to create the discipline needed to take on great tasks. If you feel you lack the willpower to achieve your goals, there’s no need to fret. Willpower is like a muscle. It can grow and become stronger with use. Just as you would start with light weights when exercising your muscles, start with small exercises of discipline in order to develop your willpower. Instead of making a goal to exercise every day for the entire year, commit to exercising 6X a week for the next thirty days. If you have trouble wasting time surfing mindless websites, make it a goal to devote 45 minutes to concentrated work. After the 45 minutes, give yourself a 15 minute break and surf the web to your heart’s delight. Repeat. After awhile, you’ll be able to work an hour without surfing the web, then an hour and a half, then two.

Once you develop your willpower in small areas, move to bigger ones. With time, you will forge a will that will allow you to accomplish any goal or obstacle placed before you.

Quit navel gazing and get to work. When it comes to making life changes, my generation has replaced good old-fashioned work with navel gazing. Instead of just putting your shoulder to the wheel and getting going, too many men think that a period of great reflection and meditation needs to be the first step. We sit and think and mull over how we got off track, reproach ourselves for it, have a little pity party, and try to diagnose exactly where we went wrong. Clint Eastwood recently had an interview with Esquire magazine that produced these magnificent nuggets of wisdom on the subject:

-As Jerry Fielding used to say, “We’ve come this far, let’s not ruin it by thinking.”

-We live in more of a pussy generation now, where everybody’s become used to saying, “Well, how do we handle it psychologically?” In those days, you just punched the bully back and duked it out. Even if the guy was older and could push you around, at least you were respected for fighting back, and you’d be left alone from then on.

-I don’t know if I can tell you exactly when the pussy generation started. Maybe when people started asking about the meaning of life.

-It keeps coming back to “We’ve come this far, let’s not ruin it by thinking.”

Eastwood carries his philosophy over into his filmmaking; he doesn’t do much rehearsal, he just expects the actors to bring their A-game, shoots the scene, and moves on. He doesn’t dwell on his insecurities or let self-doubt paralyze him into inaction. The problem with excessive navel-gazing is that many men never move beyond the pondering period to actually taking action. Life interrupts their thoughts, and they get distracted by other things. Then, 6 months later they realize they haven’t changed and go into another navel-gazing funk about the reasons why.

Quit over-analyzing and get to work. All of history’s great men have realized that hard work is the great “secret” of success. Thomas Edison would spend days in his laboratory working on a project. Frederick Douglas spent days on end crafting speeches and writing. Theodore Roosevelt lived the strenuous life by filling his time with hard mental and physical labor. These men didn’t sit around thinking about what they wanted to do, they just did it.

So instead of spending all your time trying to “find yourself,” simply decide the direction you want your life to move, set a course for yourself, and take actions every day that are align with your goals. That’s it.