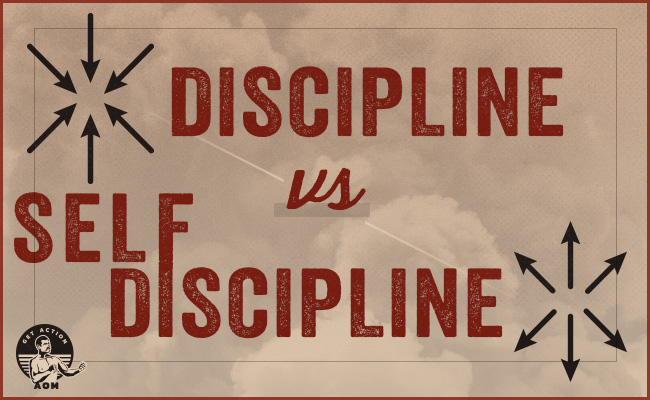 Have you been waking up early, writing in your journal, meditating, exercising, drinking eight glasses of water a day, and planning your week religiously for months and months, but aren’t seeing any real progress in your life?

Since we were little kids, haven’t we been told that if we exercise discipline, we’ll be a success?

Problem is, discipline is not the same thing as self-discipline, and you’ve only been exercising the latter.

The Difference Between Discipline and Self-Discipline

In his book, The Attributes, retired Navy SEAL Rich Diviney makes a deft, useful distinction between discipline and self-discipline.

For Rich, self-discipline is all about, well, the self. It’s about managing your emotions, resisting temptations, forcing yourself to do things concerning your personal habits and routines that you may otherwise not want to do.

Discipline, on the other hand, “is about accomplishing external goals.” When you’re disciplined, you know what you need to do to achieve an outside objective and then do whatever is necessary to get it done.

The end for self-discipline is personal improvement; the end for discipline lies beyond the self.

This distinction helps explain why individuals can be incredibly self-disciplined and yet see very little external achievement as a result. Sure, they never miss a day writing in their journal and never lose their temper, but those displays of self-mastery don’t automatically lead to outward success. There are plenty of rigidly controlled folks who nonetheless lag far behind their goals, lack cultural influence, and can’t cut it as leaders.

This distinction also helps explain why some men who lack self-discipline nonetheless make things happen in the world around them. They may drink, swear, sleep in, and never follow a daily routine, but when given an assignment with a clear objective, they do what they have to do to achieve their mission.

Case Studies in the Difference Between Discipline and Self-Discipline

It’s often assumed that self-discipline is a prerequisite for discipline — that you have to master self-control in handling your private matters, if you ever want to tackle public ones. But plenty of examples from history belie this neat correlation.

Take Winston Churchill. He isn’t what we traditionally think of as a self-disciplined individual. He was a bit of a glutton, something of a lush, and certainly a spendthrift. He lost his temper, kicked over wastebaskets, yelled at his staff. He kept an idiosyncratic daily schedule, staying up late each night, and taking a nap each afternoon. After rising in the morning, he’d luxuriate around in the bath (the first of two he enjoyed each day), then put on a velvet dressing gown . . . to get back in bed. There he’d read the day’s newspapers, respond to correspondence, and prepare memos, while propped up on pillows and smoking a cigar.

Yet, despite his lack of self-discipline, Churchill was highly disciplined. He understood his objective as a wartime leader — to win the war — and tirelessly worked for years, with unflagging focus, to achieve that objective.

Then there’s someone like Jake McNiece. McNiece was a renegade, rule-breaking paratrooper who constantly got in trouble for failing to keep his uniform and quarters clean, show up for drills, and salute officers. He got in fights and drank too much. His antics landed him in the brig more than once. He had little self-discipline.

Yet McNiece was one of WWII’s most effective and legendary leaders. As the section sergeant of the “Filthy Thirteen” — an elite demolition unit — McNiece’s men would follow him to hell, and his mission focus was unassailable. Commanding officers knew that if they gave him a job to do, he’d get it done. McNiece was disciplined.

The difference between discipline and self-discipline can be highlighted well in the contrast between the Civil War’s two commanding generals: Ulysses S. Grant and Robert E. Lee.

Lee had self-discipline in spades. He graduated second in his class at West Point, meaning he excelled in studying, drilling, and polishing buttons. As an officer, he had a reputation for being fastidious in manners and composure.

But Lee lacked discipline. He didn’t fully grasp the changing nature of warfare during the Civil War. He clung to tactics — like frontal assaults — that may have worked in the eighteenth century but had lost their efficacy in the nineteenth.

Grant, on the other hand, was deficient in self-discipline. He had a lackluster career at West Point, didn’t care much for drills and protocols, and looked disheveled much of the time. In fact, it was common for officers to confuse Grant for a regular private instead of recognizing him as the General of the Army that he was.

But while Grant lacked self-discipline, he had plenty of discipline. While other Union generals dilly-dallied with drills and practicing military formations, Grant went to battle with speed and violence. He didn’t hesitate, and he relentlessly pursued Confederate armies until they surrendered.

Grant’s discipline allowed him to ultimately win out over a self-disciplined Lee, and can be summed up nicely in this quote from him:

Everyone has his superstitions. One of mine has always been when I started to go anywhere, or to do anything, never to turn back or to stop until the thing intended was accomplished.

You can be self-disciplined, but not disciplined.

Ideally, you should be both.

Self-discipline can lead to greater health, mental clarity, and personal security, and mastering your inner-directed habits can prevent problems and distractions that can torpedo your outward ambitions.

If he hadn’t racked up massive debts and lived on the brink of financial ruin, and thus been forced to work so relentlessly at his other job as an author as a result, Churchill would certainly have had less stress in his life, and may have been an even better politician to boot.

McNiece’s antics curtailed his advancement in the military, and he quit drinking after the war when he realized it was getting in the way of his having a relationship with the woman he loved.

Grant’s lack of self-mastery led to embarrassing personal and professional episodes and even outright poverty, particularly after his presidency. Even though he sometimes struggled to get a handle on his private affairs, he himself recognized the necessity of self-discipline in executing his outward operations: while for most of his life, Grant battled a drinking problem, in the lead-up to the Civil War and during its battles, he vowed not to imbibe a drop of liquor because he knew it would get in the way of his ability to win.

But while self-discipline can be an aid in achieving external goals, it is not a sufficient condition for success. All the early-rising and barbell-lifting and meditation-practicing in the world won’t simply carry you to your dreams. Such private behaviors must be coupled with outward-directed focus and determination — with discipline — if you are ever to reach your objectives.

Discipline and self-discipline represent two distinct attributes and skill sets. Each must be worked on and trained if you wish not only to see plenty of checkmarks in your logbook of personal habits, but make a real impact in the world beyond your head.

For more insights into the attributes that lead to optimal performance, listen to our podcast with Rich Diviney: