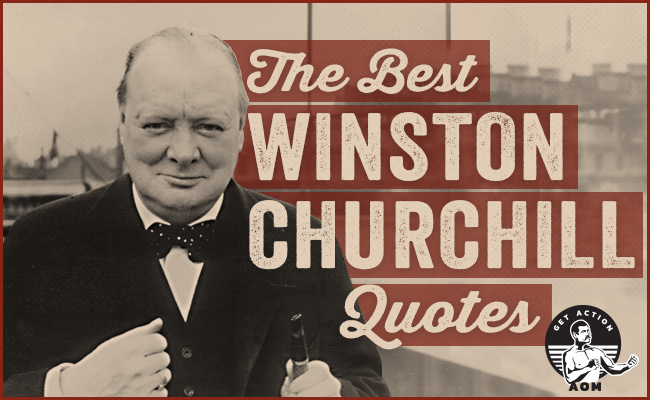 It’s been posited that, outside Jesus and Shakespeare, no one has been quoted more often than Winston Churchill.

The reason for the enduring cultural ubiquity of Churchillisms is two-fold.

First, the canon from which they can be distilled is simply huge. Over his lifetime, Churchill penned forty-four books and many thousands of articles, speeches, memos, and letters, which, in total, amount to about 20 million words.

But it was, of course, not simply the quantity of Churchill’s writing that has made him so frequently cited today, but its incomparable quality. From an early age, Churchill set out to become a master of the English language, and he continued to refine his craft his entire life through. Believing that “There is no more important element in the technique of rhetoric than the continual employment of the best possible word,” he would spend hours on this selection process. He labored over the many drafts of his works, making sure his phrases had just the right punch, just the right cadence and rhythm. He spent an equal amount of effort eliminating any words which weren’t necessary, which lent his writing the pithy, concise style which ultimately produced so many memorable epigrams.

Beyond the mechanics of language, it was the intangible qualities Churchill infused it with that created such an enduring effect. As a soldier, gardener, pilot, stonemason, traveler, hunter, painter, husband, and father, Churchill had a far more varied range of experiences to draw from than the average politician. As a sentimental Romantic, he was able to imbue his words with genuine emotion, conviction, and sincerity. As a man with a thoroughgoing sense of humor, he knew how to leaven the serious with the witty. And as a thick-skinned individualist, he was unafraid to ruffle feathers and be strikingly direct.

For these reasons, Churchill’s words continue to stir us today. Whether on the topics of war and politics, the necessity of action, the importance of history, or the theme which overarched his entire life and career — resilience — his quotes spur reflection, elicit a chuckle, and strengthen the backbone. While it’s impossible to include all his worthy gems, below you’ll find a collection of many of his very best to read, ponder, and enjoy. As Churchill, who himself intently studied the quotations of others, said: “quotations when engraved upon the memory give you good thoughts.”

Note: Not only is Churchill one of the most quoted figures in history, he is also one of the most misquoted. Many of people’s favorite supposed Churchillisms were not in fact said by him at all. Others were originally said by Churchill, but have been passed along in distorted form. We have done our best to vet all the quotes below as being authentically sourced and accurately worded.

To learn more about Winston Churchill’s life, and what you can learn about it, particularly as to how to find meaning, adventure, and fulfillment as a grown-up, check out “The Winston Churchill School of Adulthood.”