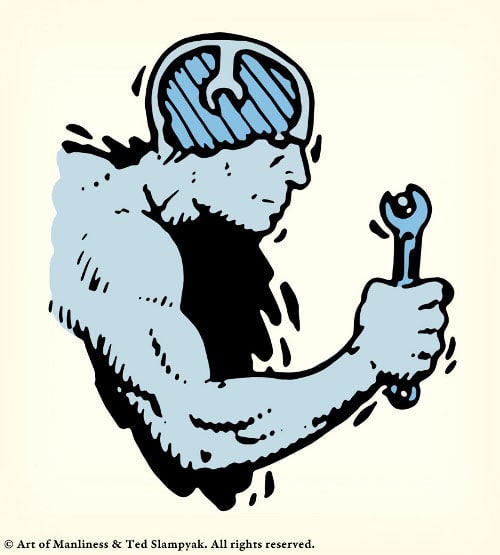 From chipping out spearheads in primitive times to modern day tinkering with computer chips, men have always been very connected to their tools. For thousands of years tools have magnified and extended our natural abilities, allowing us to gain power and control over nature and our circumstances and better fulfill our roles as providers and protectors. Tools enable us to mold and shape things in our external environment for our use and benefit.

And that is what we typically focus on when it comes to tools: what does this tool allow me to do?

But something else you need to think about is this: what is this tool doing to me?

You may have heard that tools are neutral things. And this is true in one aspect; for example, you can use a hammer to drive in a nail…or to bash in someone’s head. But tools are absolutely not neutral in the fact that the tools you choose to use and how you use them not only change things externally but mold you internally. The Jesuit priest and media scholar John Culkin put it this way: “We shape our tools, and thereafter they shape us.” Or as Darren’s blacksmith friends say, “The tool works at both ends.”

The way in which you use your tools creates real biological and neurological changes in your brain, which fundamentally alters who you are.

This Is Your Brain on Tools


Scientists used to think that when we were young, our brains were pliable and easily shaped, but that after adolescence, they set and hardened like concrete. But modern technology, which has given researchers an unprecedented look at what goes on inside the brain, has completely flipped that theory. It turns out our brains are very “plastic,” and this is true not only in youth, but throughout our lives. Our brains are constantly being reshaped and rewired every day by our experiences, thoughts, and actions.

When MRI’s were done on violinists, it was found that the part of their cerebral cortices that corresponded with the fingers of their left hands (the digits they use to finger the strings of their instruments) were bigger than in the brains of non-musicians. But in both groups the area that represents the fingers of the right hand were the same size.

When the brains of London taxi drivers were studied, they were found to have larger posterior hippocampi, the part of the brain responsible for processing and integrating spatial representations of one’s surroundings. This area of the brain stores our mental maps—a key tool for cabbies who need to navigate their way around the city. The study also found that the posterior hippocampus grew bigger the longer the cabbie had been on the job.

The brains of the literate and illiterate have been shown to handle interhemispheric processing differently. When a person becomes literate, the organization of their brains’ cognitive activity changes, and the corpus callosum becomes thicker.

In a study with preschool children, one group of children practiced learning their letters by writing them, while another group practiced by seeing and saying the letters. A month later, the children’s brains were scanned with a MRI machine, which showed that those who had practiced writing the letters had neural activity that was greater and more adult-like than the children who had said the letters aloud.

Internet use activates a specific part of the prefontal cortex of the brain. When people who are new to the internet are introduced to it, this part of their brains does not show any activity. But after using the internet for only one hour a day for five days, they show as much activity in this area of the brain as veteran internet users do. Brain rewiring takes place in less than a week.

So in the case of your brain, the tool truly does work at both ends. Is that a good thing or a bad thing? Well, it’s both. As psychologist Patricia Greenfield puts it, “Every medium develops some cognitive skills at the expense of others.” Regular use of one kind of tool will strengthen some areas of the brain while weakening the areas that don’t get exercised; our brains operate on the “use it or lose it” principle.

These kinds of mental tradeoffs occur with all tools that we use. Surfing the net can strengthen areas of the brain that deal with things like hand-eye coordination, reflex response, and the processing of visual cues. It may also build our visual-spatial skills (increasing our ability to do things like rotate an object in our minds) and our working memory. But at the same time it may, some scientists like Greenfield argue, “weaken the kind of “deep processing” that underpins “mindful knowledge acquisition, inductive analysis, critical thinking, imagination, and reflection.”

The problem these days is that we’re using fewer and fewer tools in our lives. We once had a bunch of specialized tools for all the different aspects of life: paper and pencils, calendars, maps, books, hammers, saws, telephones, radios… Now we have one all-purpose tool: the computer.

And that’s making for some lopsided brains.

Enroll Your Brain in Mental CrossFit 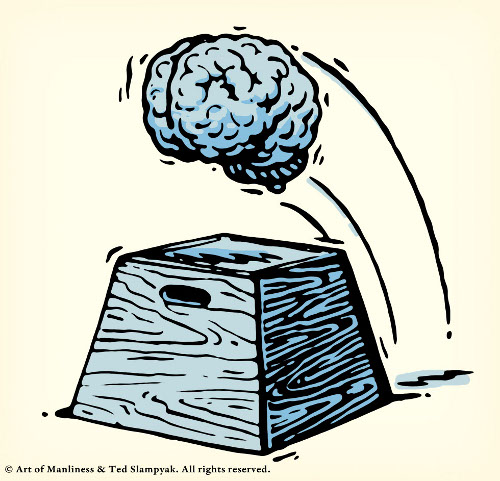 Have you ever seen a dude that concentrated on building up his upper body but never did any lower body exercises? The result was a beefy, well-sculpted torso, along with a pair of disproportionate chicken legs.

Because of our reliance on computers, we’re developing some chicken-legged brains. We’re using some parts of our brains a ton, but letting other areas atrophy and fall into disuse.

One, because our technology may not always be around. Break your GPS, and you’ll still need to be able to read a real map and utilize your “mental maps.” Will your hippocampus be up to the task?

And two, there are still a lot of areas of our lives that require parts of our brains that are not activated by the internet.

It was the fascinating (if in my opinion a little too pessimistic) book, The Shallows, that got me thinking about this subject. The author, Nicholas Carr, writes many pages on the powerful effect technology has on our brains and our thinking. But it was this short little observation from his own life that stuck with me the most, because it hit so close to home:

My mind…[is] changing. I’m not thinking the way I used to think. I feel it most strongly when I’m reading. I used to find it easy to immerse myself in a book or a lengthy article. My mind would get caught up in the twists of the narrative or the turns of the argument, and I’d spend hours strolling through long stretches of prose. That’s rarely the case anymore. Now my concentration starts to drift after a page or two. I get fidgety, lose the thread, begin looking for something else to do. I feel like I’m always dragging my wayward brain back to the text. The deep reading that used to come naturally has become a struggle.

How many of us could say the same thing about our own minds? And this inability to focus affects not only how we read; while we have come to expect all areas of our lives to function like the internet by giving us short, constantly changing little bursts of information, many areas of our life stubbornly continue to function in the slow, linear fashion that they have for hundreds of years. Going camping, sitting through a church service or a college class, giving someone our full attention during a conversation…if the only tool we’ve been using is the computer, the chicken legs of our brain easily give out during the “strain” of such activities. Everything outside the net feels a lot more boring than it used to. But there are some experiences in life you don’t want to scan and skim your way through, but would rather completely lose yourself in. So how do you maintain the ability to truly immerse yourself in life?

The answer is not to cut off your internet and throw your computer out the window, but instead to enroll your brain in “Mental CrossFit.” You’ve probably heard of CrossFit by now. It is a fitness program governed by this simple mission statement:

The aim of CrossFit is to forge a broad, general, and inclusive fitness. We have sought to build a program that will best prepare trainees for any physical contingency—not only for the unknown, but for the unknowable. After looking at all sport and physical tasks collectively, we asked what physical skills and adaptations would most universally lend themselves to performance advantage. Capacity culled from the intersection of all sports demands would quite logically lend itself well to all sport. In sum, our specialty is not specializing.

This philosophy not only works for your physical body, but for your mental capacity as well. In your daily life you should seek to “punish the specialist” by building up all parts your mind and preparing it for anything and everything by using a wide range of tools, not just the computer. You want as many areas of your brain to be as fit and game as possible.

Some of the ways you can do that are:

While you tone up your brain by using a wide variety of tools in your life, you also strengthen your man spirit and your character. Scientists can’t prove this of course (although some have theorized that internet use leads to a decline in social skills like empathy), but you have surely felt it in your own life. Writing an email feels very different than writing a letter by hand. An hour spent surfing the net feels very different from an hour spent whittling on the porch. When we confine ourselves to only one tool, we shut down avenues of our spirit, as Carr describes so well:

In Understanding Media, McLuhan wrote that our tools end up “numbing” whatever part of our body they “amplify.” When we extend some part of ourselves artificially, we also distance ourselves from the amplified part and its natural functions. When the power loom was invented, a weaver could manufacture far more cloth during the course of a workday than they’d been able to make by hand, but they sacrificed some of the manual dexterity, not to mention some of their “feel” for the fabric. Their fingers, in McLuhan’s terms, became numb. Farmers, similarly, lost some of their feel for the soil when they began using mechanical harrows and plows. Today’s industrial farm worker, sitting in his air-conditioned cage atop a gargantuan tractor, rarely touches the soil at all—though in a single day he can till a field that his hoe-wielding forebearer could not have turned in a month. When we’re behind the wheel of our car, we can go a far greater distance than we could cover on foot, but we lose the walker’s intimate connection to the land.

For millenia, tools have helped us live our lives more fully, and it is wise to pick up and master the new ones that are developed. But it is up to us to continue to use tools consciously and carefully, in order that they may allow us to be more, and not less, alive.

The Shallows By Nicholas Carr