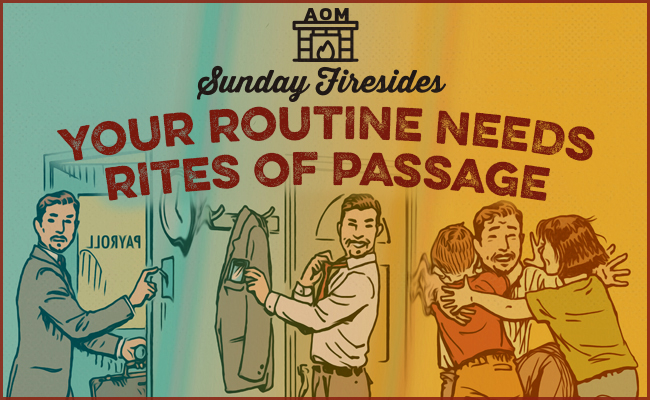 During WWII, it could take a soldier two weeks to get home, with days spent slowly traveling by ship across the Atlantic and by train through the States. Along the way he got a chance to unwind, decompress, and shift his mindset from warrior to civilian.

A soldier coming home from Afghanistan could be on the frontlines one day, and back with his family 48 hours later. Some have argued that moving modern servicemen straight from operations to leave has contributed to difficulties reintegrating and high rates of PTSD.

It’s easy to underestimate the importance of transitions, not only in the context of such dramatic changes, but ordinary ones as well.

We think of “rites of passage” — rituals of time, space, and ceremony that move an individual from one group, role, or status to another — as big, linear, one-time transformations like going from single to married.

But rites of passage can also helpfully be thought of in terms of small, back-and-forth pivots you repeatedly make each day.

From sunrise to sunset individuals wear many hats, and must toggle between various mindsets. But we tend to swivel between them without real transitions. As a result, parts of our previous roles linger with us, leaving us unable to be fully present and engaged in the subsequent ones.

Meditating between rising and leaving for work. Putting on athletic clothes and sipping a preworkout drink to shift from the office to the gym. Shutting off the monetary mindset by shutting down one’s phone at family dinner. Donning Sunday-best duds and turning on edifying music to set the Sabbath day apart from Saturday. Reading a paperback book by lantern-light before bed.

Putting such rituals in your routine helps you move between sleep and wakefulness, work and home, sacred practices and mundane habits — through our daily journeys there and back again.