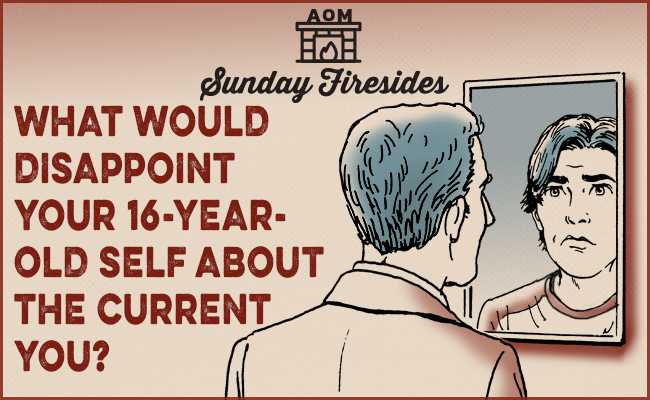 Your 16-year-old self had hopes, values, dreams — a vision of what your life would be like in the future. What would disappoint him about who you’ve actually become?

It’s easy to dismiss such a question out of hand, arguing that it doesn’t matter what your 16-year-old self thinks, since he was immature, ignorant, and something of a wanker. Which is probably true.

But these rationalizations can be ex post facto justifications created to cover the cognitive dissonance of failing to live up to youthful ideals, and made to explain too much.

Sure, you needn’t heed your 16-year-old self’s disappointment that you no longer listen to the Aquabats, but you might countenance how bummed he is that you’ve stopped listening to any new music at all.

It might be useful to register his sadness in knowing that you became an insurance agent instead of a writer; that you no longer spend any time pondering life’s big questions; that whereas you once had five great friends, you now have precisely zero.

It might be beneficial to examine those things you’ve acquiesced to in adulthood — capitulations your 16-year-old self swore you’d never make.

We like to think of wisdom as something that progressively accumulates as we age, and in many respects, including the greater recognition of nuance and complexity, it does. Yet there are also forms of intelligence that we possess while we’re young, but lose access to when we’re older: a visceral understanding that there can be value in the impractical; that ceasing to grow is ceasing to live; that commitment to an ideal can’t truly be transformative if it isn’t approached with genuine passion.

Your 16-year-old self might then have a few useful things to say to you even now, reminders of still-worthy hopes and truths you used to grasp, but have long since forgotten.