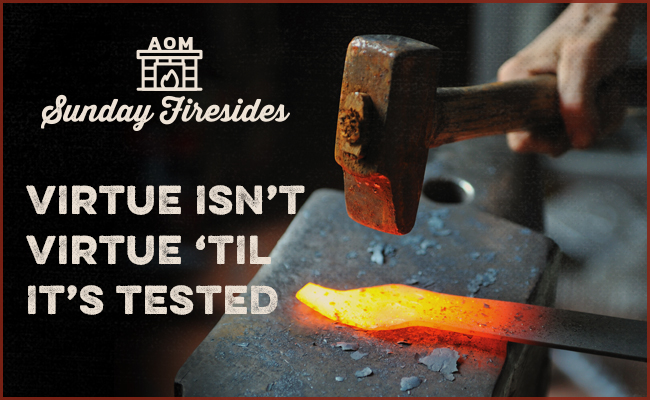 Man A boasts of how seldom he checks his phone, and shakes his head about how addicted people are to their devices.

Man B feels good about the fact he never loses his temper, or gets into arguments with others.

Man C is proud of how strictly he lives his faith, particularly how sexually chaste he’s remained.

All three individuals find a sense of satisfaction in their moral accomplishments.

It turns out Man A never feels the itch to check his phone because he doesn’t have any friends who message him. Man B never gets mad, but he doesn’t feel strongly enough about anything to even feel moved to do so. And Man C has never so much as French kissed, but then he’s never had a woman interested in him either.

For something to be a real virtue, it has to be chosen. And a choice doesn’t exist unless there is some kind of opposition – an alternative, a temptation. Sometimes we mistake moral rectitude for simple lack of opportunity.

Everyone always imagines that in an ethically fraught scenario, they’d be the hero, the rebel, the martyr. We imagine that we would have been the antebellum Southerner who fought for the Union, the German who led an underground resistance against the Nazis. But statistically speaking, we almost assuredly would not have.

It’s easy to hold a set of values when they require no risk, no skin in the game, no struggle against a countervailing force. And while it’s certainly better to hold and nurture worthy thoughts and intentions rather than unworthy ones, it’s also good to frame these ideals with an ample dose of humility – to acknowledge that they currently exist only as hypotheticals, and that hypotheticals cannot form the full basis of identity. Values don’t become virtues until they are tested.