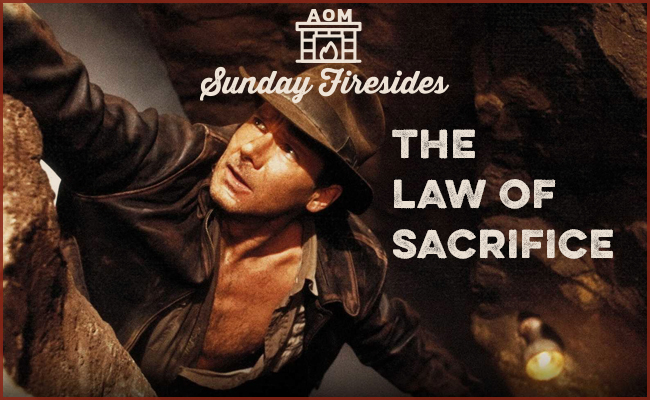 At the end of Indiana Jones and the Last Crusade, Indy is dangling over a chasm, his father gripping one of his arms, while he reaches out with the other in an attempt to grasp the Holy Grail. But his father can’t hold onto him much longer, and it’s clear Indy can’t have the grail and save his own life too; he has to make a decision. “Indiana,” his dad says gently, “let it go.” The adventurer turns his determined face to his father, and offers him his other hand.

While the stakes aren’t typically so dramatic in our own lives, this cinematic scene represents well a universal truth of decision-making: whenever you choose one thing, you must give up another. This is a rule without exceptions.

This is the law of sacrifice.

Trying to remain astride two options keeps us sitting on a fence, stuck in limbo. Or if we do make a decision, longing and restlessness for the forfeited path prevents us from fully embracing the one that’s been chosen. We cannot move forward.

To escape the trap of double-mindedness, ask yourself: “Accepting I cannot have both things, would I (or could I) really sacrifice option A, in order to have option B instead?” If the answer is no, then set your face in one direction, offer both your hands to its outstretched arms, and let the alternative go.