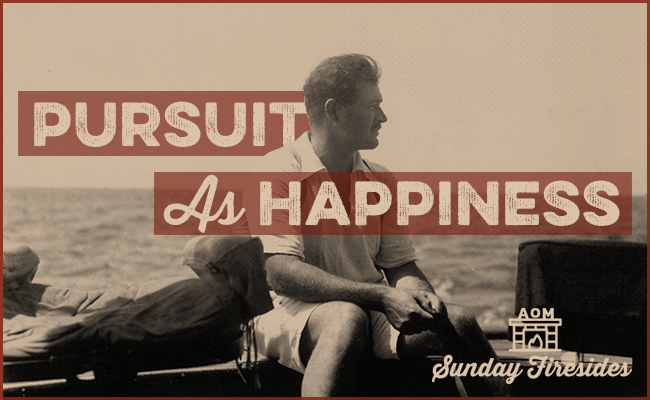 When writing Green Hills of Africa, Ernest Hemingway titled one of its sections “Pursuit as Happiness.” The heading, a riff on the Declaration of Independence’s celebration of “the pursuit of happiness,” not only well described Hemingway’s feeling about the safari he undertook which the book recounts, but his entire life’s philosophy.

Hemingway was ever in pursuit of new adventures and vistas, whether in the arena of travel, hobbies, or career; as a writer, he was always trying “for something that has never been done.”

One of the key shifts in becoming an adult is moving from seeking and choosing, to building and maintaining. If you ever hope to find both depth and height in your relationships, faith, and career, eventually you have to stop exploring every possible path, and settle on the people, place, profession, and philosophy you wish to commit yourself to.

But even after these foundations are chosen, and the project of putting down roots and constructing the edifice of a mature, meaningful life begins, you must also retain at least one area where you remain ever on the hunt. Everyone needs one distant horizon, one audacious ambition, one glimmering goal; one thing to prepare for, anticipate, plot out. Everyone needs one thing where the sometimes-decreasing-but-never-fully-vanishing gap between what you have and what you want provides the animating, paradoxically pleasurable itch of perennial discontent.

When a couple of years ago, the Hemingway family published a rediscovered, untitled manuscript of Papa’s, Ernest’s son borrowed a phrase from Green Hills of Africa and called it “Pursuit as Happiness.” In the semi-autobiographical short story, Hemingway spends hours at sea trying to reel in the largest marlin he’s ever encountered, but loses it in the end. Yet, though tired, chafed, and disappointed, he’s back out on his boat the next day.

Catching the fish was never the point.